In 1973, Pablo Bartholomew was just another rebellious teenager in Delhi. A self-described enfant terrible, he had been expelled from school, and had little idea what he would do with his life. 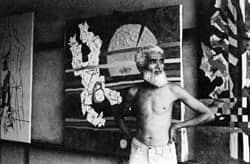 Artist as subject: M.F. Husain at work in his studio. New Delhi, 1970s

Thirty-three years later, Bartholomew found himself at another crossroads. His father died in 1985 (“from alcoholism"). Bartholomew, by now an established photojournalist, with two World Press awards under his belt and a software company built from scratch, was professionally secure, but personally fidgety: “Photojournalism had sort of reached a dead end for me. It kind of seemed dull," Bartholomew says. “It was menopausal."

So, Bartholomew decided to go backwards in the hope that he would discover something to move him forward. In the study of his crowded south Delhi flat, he started digging through bureaus full of old film. There he found troves of his father’s writings and photographs, invaluable archives which he was only able to return to after helping his mother recover from a stroke three years ago.

His father, best known as an art critic and a driving force behind the national art movement, had taught Bartholomew photography in the dark room at his childhood home. So, it was only natural for the son to return to the father when he felt he needed to learn something new again. “Last year, I started to look at my father’s images to really have a holistic sense of what there was in the family assets of images and also to get a fuller sense of his eye," Bartholomew says. “I guess a son is always in awe of his father. Because he’s a man of many crafts, he brings in different muses to play in his work—that is much more complex than, say, my work."

The result of this family exploration culminated in an exhibition now showing at Sepia International’s New York City gallery. A Critic’s Eye is split into three sections: the family “shrine" as Bartholomew jokingly refers to it—intimate portraits of his wife, the children sticking out their tongues, a friend cartwheeling; a series of portraits of close artist and poet friends, many of them captured with their own paintings as backdrops; and moody landscapes of India and New York. There is the same sense of intimacy found in Bartholomew’s black and white photographs as in his son’s work, but there is less urgency. They are reflective of a middle-aged family man who was lovingly focused on his children, his wife and his friends. His landscapes are more obscure, hinting at future stories that the viewer is left to imagine. One of the younger Bartholomew’s favourite images is that of a graffiti-covered tree branch in Delhi’s Jantar Mantar, evocative perhaps of countless clandestine encounters.

Richard Bartholomew’s life ended in frustration and he died, burdened by unfulfilled dreams for the Indian art scene. “He tried to change the art world, which really killed him," Bartholomew says.

He sees the exhibit as his attempt to come to terms with his father and to restore honour to his memory, to remind people there was so much more to the man beaten down by bureaucracy at the end of his life.

A Critic’s Eye will be on view at Sepia International, 148 West 24th Street, New York City, until 1 August. By appointment only