Tennis is the art of losing well

On the pro tour, defeat is a constant companion, victory a rare friend

The Swiss player Stan Wawrinka has these lines by playwright Samuel Beckett tattooed on his arm: “Ever tried. Ever failed. No matter. Try again. Fail again. Fail better."

This year’s French Open champion knows a thing or two about winning, but about losing he knows a bit more. Wawrinka was just a couple of months short of his 29th birthday, when he shunned failure and emerged a Grand Slam winner at the Australian Open in 2014. It took him 12 years on the professional (pro) tour to get there. But the week in-week out intensity of tennis demands that getting there is not enough. You have to keep going, another day, another week, another tournament. You are only as good as your last tournament. Federer spoke about this after his 2008 semi-final loss to Novak Djokovic at the Australian Open: “I’ve created a monster, so I know I need to always win every tournament." In the twilight of his career, a Federer defeat may not create waves any more, but it still sends a ripple.

The man himself has learnt to get over it, and get over it quickly. After losing in straight sets to the same Djokovic at this year’s Indian Wells final, Federer said he would forget about the match “in like 25 minutes or so".

“I’m not going to look back on that match, on that moment very long," Federer said at the post-match press conference.

It’s been a long journey for the Swiss, who once claimed that he cried “after I lost every single match...from 8 to basically 15". In an interview last year, he said the defeat which hurt most was the one against Tommy Haas in the semi-final of the 2000 Sydney Olympics: “I was really inconsolable...When I lost I curled up in a corner like a child for a long time. I could not stop crying. That defeat marked me. I lost the next day against (Frenchman) Arnaud di Pasquale and again I wept the whole day," he recalled. Then, he got up and won the world.

The way the modern tennis calendar is structured, where most players take to court almost every alternate week through the season, they are going to lose more tournaments than they win. Federer is the most successful Grand Slam player in the history of the men’s game, but he has still lost more majors than he has won. At the end of a Slam fortnight, there are 127 losers and only one winner.

“You win five matches and lose one and you’re a loser," Andre Agassi had said during an interview, just before his autobiography Open was to be released in 2010.

In the book itself, Agassi writes: “I’ve been let in on a dirty little secret: Winning changes nothing. Now that I’ve won a slam, I know something that very few people on earth are permitted to know. A win doesn’t feel as good as a loss feels bad, and the good feeling doesn’t last as long as the bad. Not even close." 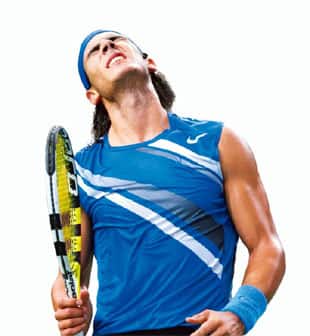 A former player on the International Tennis Federation (ITF) Futures Tour (the lowest rung of pro events), Vaja Uzakov had, in an interview in 2008, summed up the feeling of the players who are restricted to the fringes of the game. “After practising so much, working so hard, you don’t win. Then you think what are you doing here? People who are not broken in the mind continue, the others stop playing." The Uzbek could never really break out of the losing cycle; he reached a career high of 698 in 2010. He is 27 now and already out of the game.

Nadal has also had to develop resilience towards defeats recently. Almost unbeatable on clay in the last decade, the Spaniard won only one tournament on the surface this season at the Argentina Open in Buenos Aires, in March. At the French Open, where he had won nine titles in 10 years, he was beaten in straight sets by a rampaging Djokovic.

“Everybody loses in every place," he said after the defeat on 3 June, his 29th birthday. “I lost not many times here, and that day arrived today. Again, accept like I always accept the defeats, and the only thing (that) is there: I want to work harder even than before to come back stronger."

Every loss hurts, some more than the other. Players cry, whine, sulk, learn. They develop an arduous relationship with defeat, one that is often laced with a sense of inevitability. It is a professional hazard. They know the cloak of invincibility eventually wears thin. Murray’s contemporary Djokovic was probably handed the most difficult task. He had to break the stranglehold of arguably two of the best players the game has ever seen—Federer and Nadal—to claim glory. The Serb lost to them enough times, before he finally learnt how to win.

“I remember when I was coming up and playing against Roger, Rafa, in big matches. I felt like the whole tournament I played great, and then against them, for some reason, it doesn’t happen the way you want it," he said, also in Dubai. “Doesn’t necessarily mean that it’s going to stay like that... You need to be the one making an impression on the court and showing you are there to win... That’s what gives you that push."

Djokovic, now 28, is an eight-time Grand Slam champion and has joined Federer and Nadal in the race for the greatest of the generation. But between 2006 (when Djokovic started making inroads into the Grand Slams) and 2008 (when he began winning more consistently) he had played Nadal and Federer 23 times, and won only on six occasions.

Retired French tennis player Marion Bartoli too knows all about being burdened by defeat. She lost in 46 successive Grand Slams before she finally won the 2013 Wimbledon championships, a record in the women’s game.

“It takes a lot of courage, patience and love of the game to be able to live like this. Sometimes for 15 years in a row," Bartoli, 30, said during her visit for the Mumbai Marathon in January. “I had some very tough moments, tough losses. But I always had this dream, and this fire inside me that I wanted to achieve so much that I did not want to give up till I made it happen."

Bartoli, her dream achieved, has retired from the game now.

On 29 June, her fellow tennis players will line up again at the gates of Wimbledon’s Centre Court in the hunt for glory. Hoping they can live by this maxim, an extract from Rudyard Kipling’s poem If greets them at the Players’ Entrance: “If you can meet with Triumph and Disaster/and treat those two impostors just the same."