Home >Mint-lounge >We remember you

Nothing sets apart one apartment from another in this professors’ colony off a busy road in downtown Dhaka where my friend Meghna has taken me. The colony has a quiet, residential feel, with mosquito nets covering the windows. Cars are parked in a disorderly fashion. An ancient guard rises slowly and salutes us as we enter. 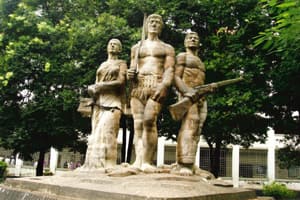 “They" were soldiers of the Pakistani army, who came to the colony on the night of 25 March 1971, and began banging on all doors. When Meghna’s mother opened the door, an officer asked her in Urdu, “Where is the professor?"

Her mother asked why they wanted to meet her husband, Jyotirmoy Guhathakurta, who taught English at the university and was marking his students’ papers.

The officer said they had come to take him away. “Where?" Meghna’s mother asked. The officer didn’t reply.

They took him and other professors out of their homes. “We turned around and heard the firing of guns," she told me, adding: “And we saw all of them lying in a pool of blood. Some were shouting for water. We rushed out to the front part of the compound. I saw my father lying on the ground," she says, pointing out the spot. He was bleeding and badly hurt. He died five days later. There is a tree near the spot where the good professor was shot. There is an abstract sculpture of a flame now, remembering the professors killed that night.

Later, Meghna, who is an academic and peace activist, takes me across the road to Jagannath Hall, the hostel for Hindu students. The campus has an old-world charm, with colonial-era buildings. The hall has a cream wall, covered with moss. Someone has scrawled Brazil on one of the walls, cheering its football team.

Some of the earliest demonstrations demanding the right to be administered in their language, Bengali, had taken place at the university. In 1970, Sheikh Mujibur Rahman led the Awami League to a spectacular electoral victory. Instead of inviting him to form the government, General Yahya Khan began negotiations. At that time too, students came out in protest. Controlling the campus was a major strategic objective for the Pakistani army. Many students died; they are remembered today through plaques and statues.

The most prominent of these is Aparajeyo Bangla (Invincible Bengal) with two shirtless men, one carrying a large rifle in his hands, another with a rifle slung over his shoulder, with a woman in a sari walking a step behind, carrying what looks like a first-aid box. The image has become iconic, used often to rouse nationalist spirits. Nearby, at a place called Shirishtola, there is a quiet place to reflect: stone slabs in white, with intricately carved reliefs in red, narrating Bangladesh’s history. On adjoining panels, there are poems of Rabindranath Tagore and Nazrul Islam.

To commemorate the students, faculty and staff who died in the liberation war, a Tagore poem is inscribed: “Moronoshagor pare tomra amar, tomader shmori,/Nikhile rochiya gele apnari ghor, tomader shmori (You have crossed the ocean of death, becoming immortal—we remember you/You reside everywhere, we remember you)."

We look at the other sculptures scattered in and around the campus. One shows young men preparing to attack an enemy target, another has men with arms locked, determined not to use violence. Almost all the statues are of men: They look upright, standing firm, their chests filled out with pride, their faces turned skyward, like classic, Soviet-era sculptures extolling the supremacy of human endeavour over insurmountable odds. Women feature in few sculptures, usually in supportive roles, never with weapons. Only one controversial sculpture shows a woman being assaulted (rape was a weapon of violence and countless women were abused. Many have remained silent; only in recent years have some begun to speak out, and their stories are still being written).

Meghna then brings me to a fenced-off area, with a solid base of bricks beneath. Flowers grow in that plot. It is a mass grave. A small plaque remembers the lost lives. Many mass graves remain to be discovered. There is a private initiative, led by entrepreneur Akku Chowdhury, advertising professional Aly Zaker, physician Sarwar Ali, publisher Mofidul Hoque, architect Rabiul Hussain, and banker Tanvir Haider Chowdhury and others who had fought for Bangladesh’s freedom in their own way, who have come together and built a small Liberation War Museum. It has taken four decades for them to get land from the government to build a proper world-class museum. Construction began in December 2010.

The museum will bring together stories, experiences, and mementos from around the country.

But the history of that liberation lives in Dhaka’s streets. The saga began on that campus, where students and teachers rebelled against injustice.

First they spoke, then wrote, then demonstrated, protested, marched, and finally, some among them took up arms. Many paid the ultimate price. The statues extol their heroism; by working unobtrusively for peace and talking about her heart-rending experience, Meghna ensures, through her dignity and humanity, that nobody will forget what happened 40 years ago.

Write to Salil at detours@livemint.com