On the crisp and sunny February day we meet, Tomas Ernberg has a lot on his plate. It’s been less than eight months since the 41-year-old managing director of Volvo Auto India took over the top post in the Swedish car maker’s India operations, and he is lining up a series of new announcements and initiatives, including the launch of new variants of their cars, a couple of hours after the interview. They will be his first salvo at getting Volvo a bit of traction in the luxury car segment in the country, where it is still a fringe player, more than four years after it entered the market. 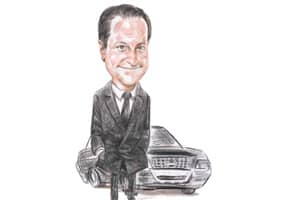 Ernberg won’t be rushing headlong into the fight though. His approach is more measured, more geared for the long haul.

“Our expansion will happen in a controlled way," he says. “India’s growth potential for luxury cars is huge. In that context, the German car makers are only still tapping the surface. In 2007, the penetration of luxury cars was 0.2% of total car sales. Last year, there were around 20,000 cars sold, a penetration of almost 1%. So it’s grown 10 times. By 2020, we are talking 150,000 luxury cars being sold." By that time, Ernberg reckons, Volvo will be selling 20,000 cars per year, with around 50% of the market share in luxury cars in India.

The first move was to bring prices down.

“We figured that a lot of the volume that Germans had got was for competitive pricing," says Ernberg. “We had cars with bigger engines and we started at higher prices. So we got a smaller 2-litre diesel engine called D3, with a high torque, and now our cheapest model, the S60, will come for ₹ 24 lakh." The original entry-level D5 variant of the S60 saloon, with a 2.5-litre engine, costs ₹ 27 lakh. Polyglot: Ernberg is fluent in four languages, and conversant in a fifth. Jayachandran/Mint

“It’s only available in Volvo cars, and it came about after a big survey done in Europe a couple of years back found that almost 70% of car accidents in Europe happen at lower than 30 kmph (kilometres per hour), and 50% of the time, it’s because the driver has not reacted," Ernberg says. “We also have lane departure warning, so if you leave your correct lane, the car gives you a warning. In India, you’ll have to switch that feature off, of course," he adds, smiling.

Ernberg says that by January, Volvo will also launch a new car simultaneously in India and Europe, putting the two markets symbolically on a par—“though I can’t talk about the car yet".

The other Herculean task Ernberg and Volvo face in India is to make their brand’s presence felt in the luxury car segment, and again, the approach is neither conventional nor head-on. “We are looking to get away from traditional advertising," Ernberg says. “It is difficult to gauge what results advertising in newspapers or magazines have. So we want to directly reach the high net-worth individuals, around 250,000 people in India, who can afford a Volvo easily, a lot of one-to-one customer relationship management."

It’s a model Ernberg understands intimately. He began his career in Volvo with the responsibility of selling tax-free cars to diplomats and embassies in Turkey. But his reason for joining Volvo was not a love for cars, but love for a woman.

In 1994, after finishing his economics degree from the Middle East Technical University in Ankara, Turkey, Ernberg’s priority was to find a job that would keep him in the country, because he had a Turkish girlfriend he had no intention of parting with. “I applied to the 25 Swedish companies which were established in Istanbul, and one of the first positive responses I got was from Volvo. So I grabbed the chance and began working there the same year," he says.

In 1998, he married Shubnam, his Turkish girlfriend, and the couple now have two daughters.

Ernberg, who has three brothers, makes an annual trip to his parents’ home in Båstad, an idyllic town bordering a sheltered bay, 250km from Gothenburg (where Volvo’s headquarters are located), Sweden. This is where the entire family comes together.

“My brothers all married different nationalities—Spanish, Argentine and Ecuadorian," Ernberg says. “So it’s a babble of languages and cuisines. We love coming together in the kitchen to cook elaborate meals. Every year we do this, and it’s very special." Though the thrills and romance of such a country-hopping childhood were considerable, there were some serious drawbacks too. “You go to school, make friends and settle down. Then your dad comes and tells you OK, get up and pack, we’re leaving in a couple of months, and you lose all your friends," Ernberg says. But now he is discovering a new, happier side to this. “With the help of social media, I’m finding so many old friends from many years back," he says. “I’m finding friends with whom I never thought I’ll be able to make contact again—just a few days back, I reconnected with an old friend in Argentina on Facebook. It’s thrilling and entirely unexpected."

Ernberg spends a lot of his free time playing sports—volleyball, tennis and golf. Soon, he’ll be seen on the greens with increasing regularity. Volvo has been hosting the Volvo World Golf Challenge for 24 years now. This year, the championship will also come to India, in partnership with the Professional Golf Tour of India.

“Volvo and golf fit well," Ernberg says, “and it’s a lovely way of making people conscious of the brand."