When Uday Shankar was a nautch girl

When Uday Shankar was a nautch girl

Ashish Khokar has memories of his childhood home being so full of archival material—film rolls in the refrigerator, newspapers stacked on beds and tables— that he and his siblings had to move out early.

His father, Mohan Khokar (1924–99), a dance critic and scholar, pioneered dance documentation in India. He wrote for magazines, journals and newspapers and made his own photographs, illustrating articles and the five books he produced. Ashish estimates that his father took over 200,000 photos and collected 25,000 press clips. After his father’s death in 1999, Ashish began supplementing the archive with contemporary material such as costumes and digital media. 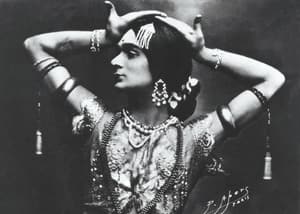 Ashish, previously a dance critic for TheTimes of India and India Today, has curated The Mohan Khokar Dance Collection to present a panorama of 100 years of Indian dance.

Supported by the Indian Council for Cultural Relations, the exhibition will tour the world, starting in Delhi on 17 July. Around 700 objects related to the world of dance, and 300 wall panels comprising photographs and illustrations, will be displayed in a generous, 7,000 sq. ft space at the India Habitat Centre. The collection is a worthy reference point for the milestones in Indian dance in the 20th century—a period of great changes.

Mohan Khokar’s association with dance worked at many levels. He was a dance student and learnt Kathak in Lahore and Bharatanatyam at Kalakshetra in Chennai (becoming Rukmini Devi’s first male student). He graduated to institutionalized roles later, becoming the secretary of the Sangeet Natak Akademi and the founding head of Vadodara’s MS University’s dance department. With his marriage to the Bharatnatyam dancer M.K. Saroja, he forged close bonds with dance stalwarts. The archive is greatly enriched by the inclusion of his personal correspondence. There are, for instance, rare pictures of a young Uday Shankar in Paris performing as a nautch girl in keeping with the common perception of Indian dance in the early 20th century. Mohan Khokar was also his biographer and the collection includes a sizable number of letters and posters of Shankar. Moreover, Mohan Khokar’s recordings of Shankar’s voice are the only recordings of the renowned dancer and choreographer available today.

The range of media that the exhibition covers is immense. There are back issues of Marg (an issue dedicated to Odissi dance at a time when Mohan Khokar and others were lobbying for it to be recognized as a leading dance form of India by the Sangeet Natak Akademi); books on dance in several languages; 78 rpm discs of dances of tawaifs and devadasis; popular art representations of dance comprising handbills, posters, calendars, postage stamps; and masks, props and dance dolls from the world over. Also on display are dissertations and first prospectuses of national dance institutions such as Kalakshetra, Santiniketan and Bharatiya Kala Kendra. At the exhibition opening, costumes will be displayed on dancers—and icons such as Birju Maharaj and Raja and Radha Reddy have confirmed their attendance.

This is the first time the archive will have an audience larger than family and friends and Ashish is looking forward to it as a starting point to finding a permanent home for the collection. At 52, he finds it increasingly difficult to manage the archive. “This has been lying packed in 70 trunks in our family house in Chennai for all these years," he says. “And what is dance without an audience?"

A Century of Indian Dance: 1901-2000 will run from 17-24 July at the India Habitat Centre, New Delhi. It will travel to Chennai and Bangalore in November-December before being taken to the US and Europe in 2011-12.