Why Nagaland is clean food central

It's no fad. In its minimally enhanced tastes, natural flavours play hero

My mum raised the fork to her mouth and paused. Her nose wrinkled slightly, and the piece of chicken cooked in bamboo shoot made a rapid descent back to the plate.

“Are you sure this is chicken, dear?" mum asked hesitantly. “It has such an…unusual taste." I checked the menu again. There it was: boiled chicken in fermented bamboo shoot.

My family is fairly adventurous: We have eaten haggis in Scotland, frog’s legs in Goa, kidneys and brains and trotters at home. But this, our first taste of local cooking on our Nagaland trip, was different. Never before had we encountered such a bland-looking chicken with such dense flavours.

Naga food is famously devoid of masala: Most of the dishes we tried on our travels were flavoured with hints of ginger or garlic, some king chilli (bhut jolokia) and a little oil or pork fat to draw out the natural flavours of the chicken, pork or vegetables. But though it seems intuitive for outsiders to describe the food in terms of what it doesn’t have, as I ate my way through the state, I realized Naga food was all about retaining the essential taste of ingredients. Cooks apply seasoning with a very light touch; sometimes, the vegetables are simply steamed, salted and served. Even the actual cooking seems minimal and precise. Consequently, our masala-jaded palate took a few days to acclimatize.

In The Seven Sisters: Kitchen Tales From The North East, Purabi Shridhar and Sanghita Singh write that Nagaland is home to fiercely independent tribal groups that keep their ethnicity and traditional roots alive. We saw this everywhere we went. In the lovely Tuophema Tourist Village lodgings, for instance, many of the employees had returned from working in cities to help their (Angami) tribe. Neitho-o Kense, the chatty managing director, told us that his first love was teaching, but he had given it up to manage the resort.

“The profits are shared among the people of the village. Plus, we cook only with local and organic ingredients. All the food you are served here is sourced from the villagers’ homes and fields," he said proudly, serving us a plate of papaya that had just been plucked from a neighbouring garden.

Ironically, it was the only papaya on the trip that we had to struggle through, under-ripe and rubbery. All the others we ate were ripe, creamy and Alphonso-sweet. We bought them off fruit vendors, lopped off large slices and ate them for breakfast. 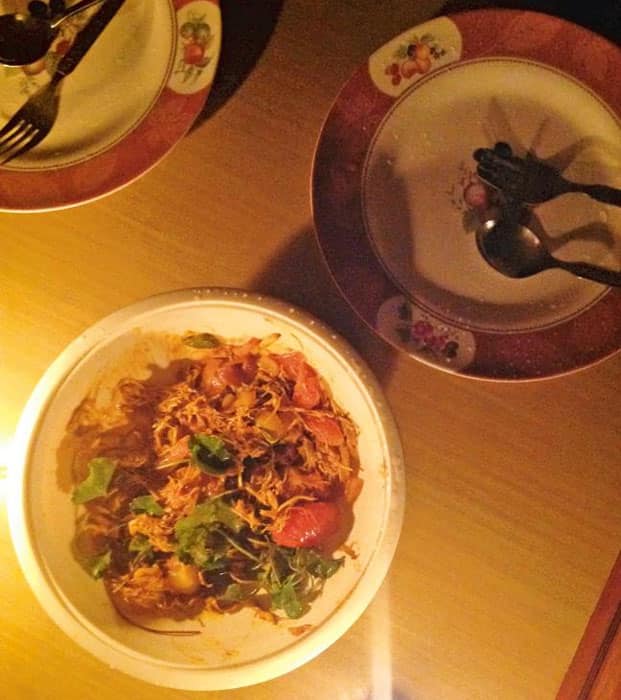 The Tuophema system of farm-to-table is replicated across Nagaland. Naga villagers are all intimately connected to the food they cook. The dishes on our table came from what we saw growing around us. Each house has its own pigpen. Fish is caught from nearby rivers. In Dimapur’s posh Niathu Resort, under a sky melting with grey clouds, we supped on spicy fish stew with wild ferns, the fish caught from the Chathe river.

Yesterday’s proud warriors are today largely agriculturalists. The landscape is studded with lush fields. And there is plenty of slash-and-burn cultivation; in many places, we saw thick pelts of forest had been cut for rice farming. Clearly, the Nagas are ardent lovers of rice.

Almost every meal came with a clump of sticky rice: We ate it in a moreish khichdi-like dish called gallo, made with greens; as part of a mild chicken stew; even for breakfast as a sticky sweet rice cake, made with sesame seeds. It was all served with tathu, a fiery chutney.

But although we were served rice and vegetables with every meal, there is no doubt that the star of the plate was meat. Most Nagas follow Christianity; dietary restrictions are few, or non-existent. Consequently, there is a certain honesty about their food. 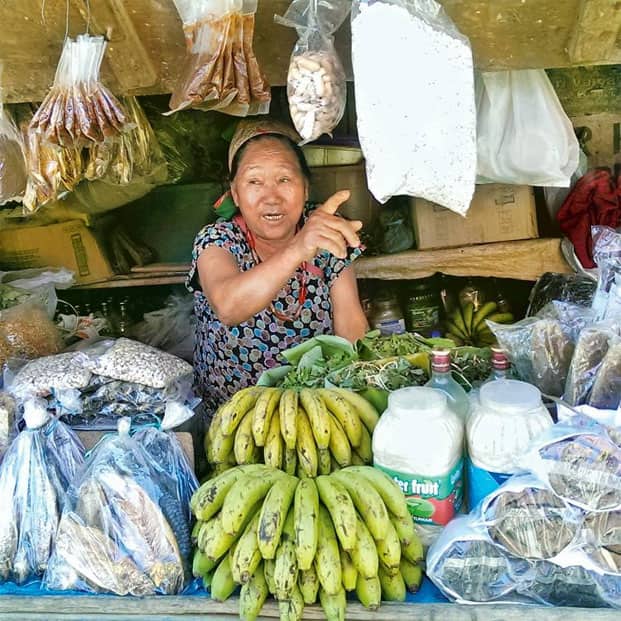 As we ambled through village markets, we saw crates of live silkworms, snails and snakes, chickens and ducks in bamboo cages, rabbits in bamboo crates, and plenty of bloodied porcine heads leering out of butcher shops. There is no chicanery, no neat slices of ham or sterile packages of chicken legs, as in a supermarket. What you see alive one minute is on your plate the next.

In Tuophema, we befriended a gentle brown dog, happily wearing a red collar around her neck. “She’s probably going to be lunch," our guide said offhandedly, breaking three hearts in one fell swoop.

Pork is by far the most popular meat, but we also ate plenty of chicken, fish and greens. And as our taste buds grew more accustomed to the cuisine, we discerned subtle differences in the cooking of various tribes.

For instance, Tuophema’s Angami cooks use plenty of axonhe (the famous umami-tasting fermented soya-bean chutney) in their cooking. “The soya bean is boiled and kept for two days, wrapped in banana leaf and dried in the sun for three days. Then it is ready for use," explained our waitress at the community dining hall of the Tuophema Tourist Village lodgings. We ate it prepared with chicken; in pumpkin with basil leaves; and with mustard greens (the eating was the easy part: the hard part was overcoming the somewhat disagreeable smell).

In Mokokchung, the seat of the Ao tribe, we sampled plenty of dishes made with anishi (a yam leaf or stem preparation), usually made with pork (dried, smoked and salted, and cooked every which way). The anishi tasted earthy, pungent, an excellent foil for the smoky pork.

But perhaps the most memorable part of our trip was our brief visit to Riphym village. The dormitory-like rooms overlooking the village had no electricity or running water. We lugged our (icy) bath water in buckets from a nearby tank and flapped newspapers to create a bit of breeze on a sunny day. But as dusk fell, a cool wind swept into our room (the window wouldn’t shut). Far away, a pale view of the hills was blanketed by the falling night. Below, the pealing of church bells and voices from the village choir wafted up to us. Cattle lowed as they settled down for the night.

Meanwhile, in the kitchen, our guide, Tasang, struggled with the bamboo shoots and dried fish that we had purchased from the market that day. “I like to cook," he confessed, “but I am afraid you will not find it tasty." But with the united efforts of our driver and a young local boy, Tasang presented us with a feast.

The fish he roasted with the bamboo, over a wood fire. The tiny, crisp morsels tasted smoky and uncannily like dried Bombay Duck. Next was yam, cut into small pieces and boiled without even salt. Untainted by seasoning, the yam was supple and tender in the mouth. Then we ate lotus flower, shot through with the vicious Naga chilli. There were salad leaves that looked like coriander but tasted like rocket; plus, of course, the ubiquitous sticky rice. We nibbled on wild berries. Everything was washed down with glasses of watery, sweet rice beer.

As we trudged back to our room after dinner, the village was completely dark, lit only by the starry sky. Sometimes, the best bits of travel are the ones that leave you slightly discombobulated.

What to eat, where, in Nagaland

Dimapur: Aketoli Zhimomi, the winner of the first season of Naga Chef—which leads to the Hornbill Masterchef competition, part of the state’s annual Hornbill Festival in December—aims to revive traditional cooking with her restaurant, Ethnic Table, in Dimapur. Ethnic Table serves only what’s in season, including snails, frogs and crickets, along with regulars like axonhe and pork. You could also try her range of pickles, Eat More, which come in a variety of flavours—Raja Hot Sauce, Smokie Beef, Spiced Axone and Leaf Lard. (9856435533; near Faith Hospital, Old Sewak Road).

Kohima: Try ethnic Naga cuisine at Vivid restaurant, a place that doubles up as a fast-food café—with free Wi-Fi (8119069887/ 9774091782; Keditsu Building, PR Hill Junction). Or try the charming Chingtsuong Restaurant for its smoked meats. Look out for its red door at the Razhu Point Junction.

Tuophema: At the Tuophema Tourist Village, an initiative funded by villagers, you can get a taste of traditional Angami food. It’s crowded during the Hornbill Festival and Sekrenyi—the Angami festival of purification (in February)—but quite empty otherwise (9436832075/ 8014926738).

Mokokchung: Mokokchung has plenty of momo-chow joints, tiny hole-in-the-wall places serving excellent pork momos and noodles. All you need to do is walk down the busy market street. If you want something more upmarket, go to the Whispering Winds hotel. It’s perched at the town’s peak, and its restaurant offers Ao Naga, Indian, Continental and Chinese food.