Phokatcopy | He is no copycat

Phokatcopy | He is no copycat

All of 23, Harsh Narang graduated last month from the Indian Institute of Technology (IIT), Delhi, with a five-year MTech degree in math and computing. As he puts it, student life was easy and the course-load, manageable. It left him with time to try out other things—help out an IIT professor with research in mathematical finance, intern at a university in Germany, work at an international investment bank’s trading desk, and intern with a tech start-up firm on campus.

Working at the bank and the tech start-up were contrasting experiences—the bank was a 9-5 job in a structured environment in an air-conditioned building that housed 1,100 people and the start-up was a room with “six people and six machines". Narang loved the vibe at the start-up. An original: Narang, who just graduated from IIT Delhi, in one of the photocopying shops at a campus. He estimates that PhokatCopy is currently catering to around 75,000 students in Delhi. Pradeep Gaur/Mint 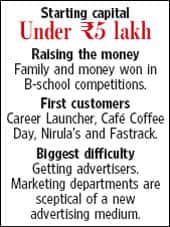 The PhokatCopy idea won Narang and his team five B-Plan prizes. Somewhere along the line, while pitching it to judges at various competitions, Narang actually got sold on it himself. “I realized that I had to try this plan out in the real world," he says. “Otherwise I would always have this regret."

In June 2009, while still in his final year, he, along with three friends, set up PhokatCopy Student Advertising Pvt. Ltd. The initial capital came from his parents and the money they had won in B-Plan competitions. The main task ahead was to sell his business model to potential advertisers—companies that would want to target the college crowd. By end-July they had their first customers—Career Launcher, Café Coffee Day, Nirula’s and Fastrack.

His original plan after graduation was to intern with a bank in Germany. But he got increasingly drawn into the business—the day he collected his German visa, he cancelled his plane ticket to Germany. The same day PhokatCopy got a prized customer—Apple Inc. This was in August.

There have been hurdles aplenty. Narang points out that making cold calls to companies’ marketing departments is never fun; the response is often indifferent or even rude. Nine out of 10 people don’t have the time to listen to you. To keep themselves motivated, the team members maintained a pleasant, informal working environment and gradually learnt how to make a pitch.

“We reached out to a lot of advertisers," says Narang, “and finally managed to convince some of them." The biggest change in plan was to not make the service free upfront. PhokatCopy operates through photocopying shops around campuses in Delhi and there was nothing to prevent the photocopy guy from getting free sheets from them and just giving it to the raddiwallah.

So the model was refined—now a student pays for his PhokatCopies and gets a scratch card in return. He then registers on the PhokatCopy site, keys in the unique scratch card number and voila! The money paid for photocopies gets added to the student’s cellphone prepaid account. So if you spend Rs40 on photocopying 20 sheets, you get 40 credit on your cellphone prepaid card. Narang says 95% college students have prepaid phone cards. So it’s a perfect fit.

Narang also realized that it made business and ethical sense to use environment-friendly, wood-free paper (made from sugarcane pulp) and eco-friendly printer ink.

Passion. “I had an idea and I had to make it work," Narang says. Entrepreneurship is not a glamorous affair but he loves the idea of making an “impact", as he puts it. Already catering to 50 colleges in Delhi, Narang estimates that PhokatCopy is reaching 75,000 students. Soon, the service will also be provided to 20 colleges in Mumbai.