Most CEOs report creating a high- performance organization among their top leadership priorities in today’s increasingly complex world of business. Many then add that changing corporate culture takes an incredibly long time and is one of the hardest things to do. I respectfully disagree on both counts. 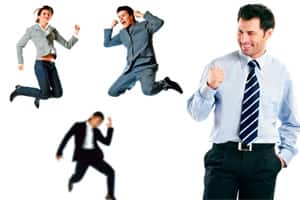 ffecting change: Creating and maintaining a high-performance culture is not time-consuming.

Before I describe a simple but powerful system for creating a desired organizational culture, I’d like to debunk a commonly believed myth: People naturally resist change.

“Raise your hand if you believe that employees naturally resist change," I ask my audience at conference keynotes and workshops around the world. Almost everyone, regardless of geography or context, raises their hand in agreement. I then say, “Imagine if you were offered the gift of a palatial house in the most posh neighbourhood of the city, with domestic staff, utilities and maintenance paid for life. Would you accept the offer and move to your new house?" Again, almost everyone raises their hand.

You might think that the example above is one of very obviously positive change and hence there is no resistance. I have often repeated this experiment with a not-so-positive example too. I ask them to imagine that the water quality in the posh area they live in currently has deteriorated severely. I ask them to imagine further that they are unable to sell their beautiful house and do not have enough savings or borrowing capacity to buy an equally big or posh home. I finally ask them if they would be willing to move to a much humbler abode, and they all agree instantly.

So what happened to naturally resisting change? How come everyone is instantly willing to move house even though we all know how stressful it is to do so?

People do not naturally resist change; they resist the fear of the unknown when they don’t understand the benefits of the change or the risks of maintaining status quo.

It is not that people naturally resist change; it’s just that most bosses don’t do an adequate job of communicating the change. To make matters worse, many bosses do not walk the talk themselves.

Here is a story I remember reading a long time ago that summarizes for me a great work culture in action. When the planes hit the World Trade Center on 11 September 2001, the CEO of a major online retail marketplace company in California was on a plane to Tokyo. When she landed, she got her team on a conference call, and asked them to ensure three things:

• Secure the company’s website and servers, and make sure the core of the business was not under attack

• Organize an online charity auction immediately, and get help to victims and their families as soon as possible.

No sooner had she finished laying out the three priorities, she was informed that the first two had already been implemented, and the third was well on its way.

I define culture as what your people do when no one is looking. Was it a coincidence that the three things the CEO demanded were already done?

Consider another example: Over more than two decades of global corporate life, I have used most of the top executive search firms at least once. One firm—Egon Zehnder International (EZI)—stood out as exceptional each time I interacted with them. The amazing cross-border collaboration within the firm is very clearly visible to clients. Suzanne Lowe, in her 2004 book Marketplace Masters: How Professional Service Firms Compete to Win, elegantly captures the essence of EZI’s collaboration success. According to her, the firm has viewed collaboration as a key strategic differentiator. The firm:

• Does not hire from competitor firms because most competitors pay bonuses based on how much each individual sells.

EZI only wants those people who are comfortable with its culture of collaboration, which is based on equality, collegiality, non-competitive internal sharing and non-hierarchical organization structures

From the two examples above, the key question is: How can a CEO ensure that the organization he/she leads has a similar culture in which everyone automatically does the right thing, and that everyone’s understanding of what the right things are is exactly the same? Efforts to change corporate culture almost always fail due to the lack of genuine conviction and commitment within the top leadership team of the company. Many CEOs and their top team only make half-hearted attempts to change culture, or worse still, they abdicate the task to human resources or outside consultants.

The first step is to articulate the desired culture in terms of the specific behaviour expected from all employees. Use full sentences that tell people exactly what to do and what not to do. “Excellence", “passion" and “collaboration" are large, abstract words which mean different things to different people—a clearer way of articulating the cultural principle or value of excellence is to say, “Find better ways of doing things." Similarly, instead of just saying “collaboration", a better bet might be to say, “Proactively help others to succeed". Most companies have prescribed corporate values, but they usually stay on the hallway posters they’re relegated to—because nothing is done to socialize or reinforce them.

The next step, therefore, is to socialize the desired culture. Repeatedly communicate it at every possible opportunity. This sounds easy but there are two common pitfalls. The first is over-reliance on verbal communication; giving speeches about collaboration at town hall meetings is not enough. Leaders must communicate through their actions as well, because employees hear their leaders’ actions louder than their words. In essence, humans are hierarchical by nature and look towards people of authority to get clues on how to behave. A culture of collaboration must begin with the senior leadership team. Companies cannot hope to establish a collaborative culture through their ranks unless they get into the habit of regularly assessing the leadership team culture first.

Finally, the third step is to reinforce the desired culture. Pure commercial performance or managing to meet sales targets should not be enough. Companies must link financial and non-financial rewards to the company’s cultural principles or values. This is an excellent way to reinforce a desired culture.

Ultimately, creating and maintaining a culture of high performance is less about fancy human capital techniques and expensive consultants, and more about sincerity of purpose at the top. It is about knowing that culture change is not what you want your people to do; it is showing them what to do, by doing it yourself.

Rajeev Peshawaria is CEO of the Iclif Leadership and Governance Centre based in Kuala Lumpur, Malaysia. He is also the author of Too Many Bosses, Too Few Leaders (Free Press).