Don’t just look, talk to me

Artist Shilpa Gupta can be tirelessly methodical. In order to execute her vision for a “production" (that’s what she prefers to call her art pieces), she spends months labouring over the logistics and the process of creating it. Besides humdrum mechanics such as connecting wires and screwing on electrical contraptions, she poses in front of the camera (Mediacity), asks her mother to stain white cloths with menstrual blood and cut them into small patches (Menstrualblood), goes into an operation theatre to record a kidney transplant in progress (Kidney Supermarket)—some of her processes can be bizarrely arduous, even gimmicky.

We meet at her two-room studio in Bandra, located right opposite her family home, where she grew up with her parents, grandparents, uncles and many cousins. In her early 20s, when Gupta began as an artist, after graduating from Mumbai’s JJ School of Art, she was considered the truant youngest child by the large family of businessmen. “Recognition at home has come late," she admits.

Home, in this context, is also India, where she has shown less than she has in other countries. After her first solo show in 1999 at Mumbai’s Chemould Gallery, Gupta’s works were shown in France, Holland, at the DaimlerChrysler Gallery in Berlin, at Galleria Continua in San Gimignano, Italy, and other state museums and public art spaces in Europe before Indian collectors and art institutions began to take notice. 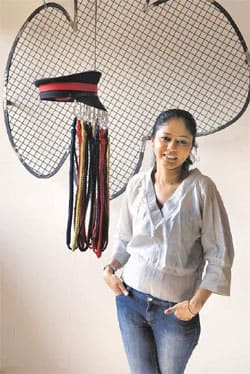 Hands on: Gupta has just completed an installation of a digital talking wall. Abhijit Bhatlekar / Mint

Last month, her lifesize video installation, Shadows II, was on display at a seaside promenade on Mumbai’s Carter Road. The work consists of a large projection screen, and the artist invites you to stand in front of it and look at your shadow reflected on the screen. By design, the screen also has some mobile shapes that slowly fall towards your shadow, thereby changing your shape. Your hand suddenly has a gun, your entire body morphs into a face with an elongated, rather scary nose. You are hooked.

Through this work, Gupta urges us to look at ourselves differently, in the context of the times we live in. People at the promenade who were there to enjoy local rock bands and other performances participated in Shadows II. A child refused to move away from it—looking at the screen in wonderment. Meanwhile, Gupta, sitting away from the work, greeted every viewer and requested them to fill out feedback forms. “I was so amazed by what the people wrote. For some of the people who came, it was almost like a movie-going experience. Some made weird associations. Some came back the next day with friends and family. I was so thrilled!" Gupta recalls.

In The Tradition of the New, she presents Half Widows, three big photographs of the same woman in oversized white clothes, holding a white flag. It is an extension of another of her video installations with the same title, which was shown in France and recently at Delhi’s Lalit Kala Academy. “I had gone to Srinagar for a holiday in 2008 and visited the violence and prejudices first-hand. I had many questions after that: What is the nation state? How do you create a country? Are we really a resolved country?" Since Gupta’s subjects are mostly women, she decided to research on Kashmiri women who are known as “half widows" because nobody knows whether their husbands are alive or dead. Andre Lee, the Taiwanese curator and critic who has put together the show of nine artists The Traditions of the New, says, “Shilpa is one of most important young Indian artists (below 40) in the world. Her work always connects to contemporary society but comes out of a purely female perspective. She is very popular not only in Europe, but also Asia. She has a deep concern for contemporary living communicated through a simple image or in an interactive way."

Gupta’s works have gone to auctions the world over and are part of many renowned collections, including Anupam Poddar’s collection in Delhi. (They have sold for anywhere between Rs1.5 lakh and Rs1 crore; last month, one of her works was bought by an art institute in Europe for a little more than Rs1 crore.) “Although the public space is what I make art for, collectors have surprised me. The dried menstrual blood cloth patches was bought by a collector in Bangkok; a Bangalore collector recently bought another. The art world is much more open than it used to be," Gupta says.

At 32, Gupta is hopeful she will see a time when Indian museums and art spaces will be created—and altered—to accommodate different kinds of artistic vision.

The Tradition of the New, is on at Sakshi Art Gallery, Colaba, Mumbai, till 31 January.