Standing 15m under the sea, the burly middle-aged electronics engineer from Melbourne was more excited by the two lithe figures swimming above us in snorkelling gear than the mean-looking, sabre-toothed fish darting against our lycra-clad legs. He waved at them, tried to do a little jig—only to be dissuaded immediately by helmeted minders—and made strange gurgling sounds as he called out their names from inside his goldfish bowl. 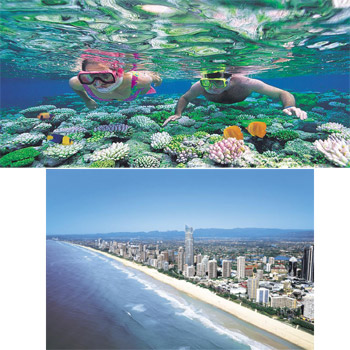 Down Under: (top) Snorkelling in the Great Barrier Reef; and the Queensland skyline. Photographs by Tourism Queensland

And that is a world so magnificent that a single glimpse will never be enough.

The Agincourt is part of the Great Barrier Reef, ranging north to south across 2,300km off the north-eastern coast of Australia, much of it aligned with the state of Queensland—not the prettiest part of the ancient formation, but certainly one of the most accessible. The presence of the reef lends a preternatural calmness to the Coral Sea, as this part of the Pacific is known, but the tranquillity is misleading: Below the surface, an alternate silent universe teems with life and colour, resembling, but not quite similar to, the one we know.

There, that coral, doesn’t it look like an illustration of the brain? Or that cluster there, swaying eerily in the currents, it looks like pasta, you think, while at the back of your mind you wonder if you can ever eat spaghetti again. And that clown fish darting through the clump of sea anemones—hey, that’s Nemo!

Like the Coral Sea, Queensland reveals unexpected depths. Ringed by the smoky blue Great Dividing Range, hugged by the pale sapphire sea, this part of north-western Australia merits a visit on count of sheer prettiness and native hospitality. Uncorrupted by the allegations of racism running riot in Melbourne and Sydney, seemingly untouched by the recession that’s rocking the continent, it seems like an idyllic hideaway, not quite of this world.

Yet (how typically Australian), it’s not content to sit back on its, um, corals. Liberated by its short history from the look-but-don’t-touch tyranny of the mythology-monument-museum circuitry, travel in Queensland is all about reaching out to the starfish, braving the bush land, feeding the crocodile, skimming the rainforest.

And again—how Australian— none of it is a sham. “In Queensland," a friend says, “we have the surfer dude, the outback hick. And then there’s the rest of us." But with so much surf and sea and outback to go around, a little bit of the adventurer rubs on to everyone. Early on a cold morning on the Gold Coast, I watch fascinated as a father puts his daughters—one in her teens, the other aged less than 10—through the paces of surfing. Dressed in full-body neoprene suits, one ankle attached to their differently sized boards, they walk into the freezing water, shivering a little, their wet blonde hair slapping against their faces. Soon, they are riding the waves out, their slim bodies silhouetted against the rising sun, creating a perfect picture against the coast’s shore-hugging, super-luxe high-rises. To each his own, though, and there’s no shame in entry-level acrobatics if your spirit’s in the right place. Queasy about getting your feet wet? Sail into the sunset in a yacht with the spray in your face and a glass of champagne in hand. Or take a seat in a glass-sided semi-submersible vessel that makes you feel like you’re in a giant aquarium as it glides about the Reef. Or just take a helicopter ride over Daintree, one of the oldest rainforests in the world, so thickly planted that in photographs the trees look like fresh heads of broccoli.

For a part of the world that’s so hands-on—wealthy yacht owners roll up their sleeves to dock their boats and managing directors of transport companies drive their own buses—Queensland also believes that distance magnifies the enchantment of the view.

Possibly because of its vastness (an impression enhanced by its wide open spaces and preference for horizontal construction), tourists like taking a bird’s-eye view of the landscape. This is confirmed one freezing morning, when a busload of people turns up for a hot-air balloon ride. After the safety briefing, which demands that all passengers be fit enough to hop into the rattan basket on their own, one is well-prepped for the take-off and the flight, so gentle as to be hardly noticeable—except that the cattle now look like miniatures and identify-the-pool-shape becomes a valid game. But after a while, “There’s a kidney" and “That’s so an Indian cow" (one of the few varieties sturdy enough to survive the acidic outback grass) palls, and one is content drifting about gently with the wind, the tender rays of the sun bathing our faces and only the occasional gush of the propane-fuelled fire reminding us that this isn’t our natural element.

Landing, though, is another story altogether: We brace our legs, cling on to the straps as our pilot kills the flame, but even the combined weight of 10 Sikh brothers from Thailand—their guttural Punjabi strangely softened by a second-generation lilt—isn’t enough to prevent the basket from nearly toppling over. For a fleeting second, we know real fear, but the basket rights itself and we’re heroes again, especially after we lend a hand in the breathless task of stuffing yards of treated nylon into a giant bag and trussing it up much like a sack of potatoes.

Too much reality? Head to an amusement park where, for the price of a ticket and the risk of leaving your stomach somewhere up there, you can scream your guts out for 90 seconds and be sure of living to tell the tale. The parks often provide a mini-Australia experience, with 85 hectares packing in everything from some of the scariest rides in the world to a kangaroo run and a photo-with-a-koala op.

Despite its efforts to resemble a giant carousel in an attempt to woo the tourism dollar in times of crisis, Queensland lives on the edge, in the outdoors. Break free. 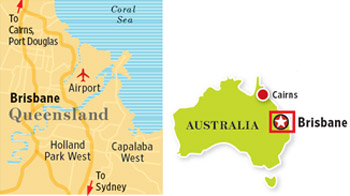 As the hub of Reef tourism, North Tropical Queensland offers superlative accommodation options. At Port Douglas, the Sheraton Mirage (www.sheraton.comportdouglas) is a five-star resort with rooms from $230. At Palm Cove, the Sebel Reef House (www.reefhouse.com.au) is a colonial mansion converted into a boutique resort, complete with an award-winning spa. Packages upwards of $269 for two nights for two. In Cairns, the Shangri-La Hotel (www.shangri-la.com) has a superb Marina-front location and rooms for upwards of $258. On the Gold Coast, try the Conrad Jupiters (www.conrad.com.au), an old-style five-star with a buzzing casino, or go swish at the Palazzo Versace (www.palazzoversace.com), which has the designer’s emblem stamped all over. Rooms start at $150 and $299, respectively.