For those first exposed to football during España 1982, it can be hard to let go of the notion that it’s never gotten better. Telê Santana’s Brazil didn’t win the World Cup, but they played with such magic that the team is remembered long after the victors have been forgotten. As Socrates, the majestic midfielder and captain, put it so beautifully: “Beauty comes first. Victory is secondary. What matters is joy."

The European Football Championships in 1980 had been a dour affair, redeemed mostly by two virtuoso displays from Bernd Schuster as erstwhile West Germany took the title. But by 1984, Europe once again had a team to savour, one every bit as brilliant as the West Germans of 1972 and the Netherlands side that reached the 1974 World Cup final.

France would go on to win the trophy, but to go all the way, they had to get past Portugal in the semi-final, in what has come to be remembered as one of football’s greatest games. An early goal for the hosts settled the nerves at the 55,000-seat capacity Stade Vélodrome, in Marseille, with defender Jean-François Domergue the surprise scorer. As the Portuguese lined up a wall to defend against Michel Platini’s free-kick prowess, Domergue stepped up and arrowed a left-footed shot into the opposite corner, parting Joao Pinto’s hair on the way. Wave after wave of French attacks followed, but it was the Portuguese that scored next. Fernando Chalana, whose dribbling on the flanks tormented the French all night, dinked over a delicious cross and Rui Jordão, born in Portuguese Angola, looped a header over Joël Bats. Manuel Bento, two days before his 36th birthday, kept Portugal in the game with some sensational saves, and in the first half of extra time, Jordão gave them a shock lead. Chalana was again the creator, this time from the right, and Jordão’s volley into the ground bounced over Bats and into the corner.

As the minutes ticked away, the unease in the stands grew. Finally, in the 114th minute, redemption arrived courtesy a melee in the box. Platini managed to squirt the ball away just before he was tackled, and Domergue was at hand to crash the ball home.

With a minute left on the clock, Jean Tigana, one of the four midfielders the French would term Le Carré Magique (The Magic Square)—Alain Giresse and Luis Fernández were the others—surged through a tiring defence. He went all the way to the edge of the 6-yard box before squaring for Platini to take a touch and finish. On the sidelines, an ecstatic 12-year-old ball boy experienced one of those fork-in-the-road moments.

Spain were beaten in the final, with Platini scoring his ninth goal in an astonishing campaign. Four years later, France didn’t even qualify to defend their title and it was the Netherlands that lifted the trophy, with Marco van Basten scoring a volleyed goal for the ages.

The Dutch defence of their crown in 1992 saw another of the great Euro classics. Having beaten Germany to top their group, the Netherlands faced Denmark in the semi-finals. The Danes had been on vacation when they were called up as last-minute replacements for Yugoslavia, a team and nation about to be dismembered by civil war. Michael Laudrup, their best player and the orchestrator of Danish Dynamite, was so pessimistic about their chances that he opted to stay on the beach. 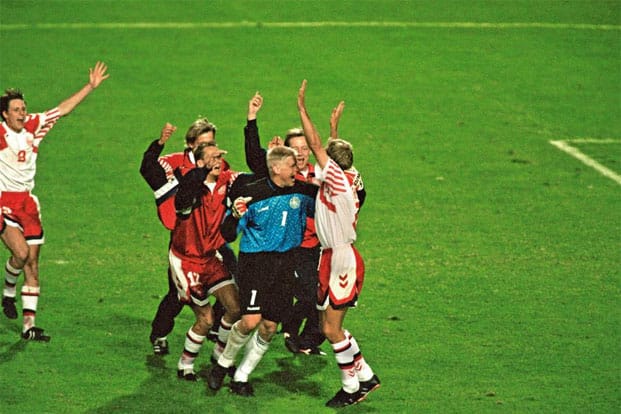 The Danes had made the last four ahead of France and England, and it didn’t take long for the younger Laudrup, Brian, to leave his imprint on the semi-final. His run and pinpoint cross in the 5th minute set up Henrik Larsen for the opener, and though Dennis Bergkamp equalized with a speculative strike from the edge of the box, the Danes were back in front in the 33rd minute.

Despite the trauma of seeing Henrik Andersen crack his kneecap, the Danes controlled proceedings until the 86th minute, when Ruud Gullit glanced on Rob Witschge’s corner kick. The ball evaded Bergkamp and a couple of defenders before Frank Rijkaard swept home.

The Netherlands could have won it in extra time, but Peter Schmeichel saved brilliantly from Bryan Roy. On to penalties, and it was van Basten who slipped up, with Schmeichel diving low to his left to effect the save. Kim Christofte’s nonchalant two-step penalty sealed a passage to the final, where Schmeichel’s heroics and goals from John Jensen and Kim Vilfort inspired a famous victory against the Germans. Like Cinderella, the Danes had come to the party late. Unlike her, as the Germans discovered, they weren’t wearing glass slippers.

In 1996, football was “coming home", to what was then Cool Britannia. Bands such as Oasis, Blur and Pulp ruled the airwaves, London was the place to be and England had a football team good enough to eviscerate the Dutch—albeit a side torn apart by infighting—4-1 in the group stages.

Sadly, the knockout stages of the tournament featured some dire football. The notable exception was the England-Germany semi-final, a game every bit as good as that which France and Portugal had contested 12 years earlier. Alan Shearer had England in dreamland after 3 minutes, swooping to head home after Tony Adams had flicked on a Paul Gascoigne corner. But the Germans would be level at 16 minutes. Both sides could have won it in normal time, with Teddy Sheringham having a shot cleared off the line, but it was all England in extra time. Darren Anderton hit the post when it seemed easier to score, and then Gascoigne’s despairing lunge just failed to connect with the ball in front of goal after Shearer had miscued a volley from Sheringham’s cross.

What followed was a painful reminder of Gary Lineker’s quote after the World Cup semi-final defeat in 1990—“Football is a simple game; 22 men chase a ball for 90 minutes and at the end, the Germans always win." This time, it was Gareth Southgate who missed his penalty. Andreas Möller didn’t. Germany would go on to win the final with a goal from Oliver Bierhoff.

By Euro 2000, the ball boy from Marseille was the talisman of a French side looking to complete the World Cup-Euro double. But Zinedine Zidane wasn’t the most eye-catching creative force in the final. A typically well-drilled Italian side had rebuffed early French advances before firing their own warning shots, but when the goal came in the 55th minute, it was courtesy a moment of pure genius.

Francesco Totti’s back-heel on the right wing released Gianluca Pessotto, and his precise cross was met by the left foot of the lanky Marco Delvecchio, Totti’s Roma teammate. As Zidane began to exert his influence in the closing stages, Francesco Toldo in goal pulled out all the stops to keep the Italians in front. Rather than any mesmeric passing, France’s equalizer came through typical route-one football. Fabien Barthez launched a free kick from deep inside his own half, and the ball eventually made its way to substitute Sylvain Wiltord, whose shot brushed Toldo’s fingertips before settling in the corner of the net.

Towards the end of the first period of extra time, the last of the changes Roger Lemerre had made to his starting XI also made its mark. Robert Pirès jinked his way down the left wing and crossed for David Trezeguet, lurking near the penalty spot, to apply the coup de grâce—a golden goal (from 1993-2004, the first goal in extra time won the game immediately) and heartache for Roma’s golden boy.

Four years later, the Greeks would pull off perhaps the biggest upset in sporting history, even as the Czech Republic played the finest football. The best game, however, featured the hosts, Portugal, and England in the quarter-finals. England needed just 3 minutes to take the lead, with Michael Owen producing an instinctive, impudent flick over Ricardo, Portugal’s goalkeeper. Ricardo saved superbly from Owen later in the half, but once Wayne Rooney went off with a broken foot, it was mostly all one-way traffic.

With 7 minutes left, Simão Sabrosa crossed from the left, and Hélder Postiga powered in a header to take the game to extra time. In the second half of extra time, Rui Costa ghosted through the English midfield before slamming an unstoppable shot past David James. That should have been that, but England weren’t to be denied the masochists’ ending. David Beckham floated over a corner in the 115th minute, John Terry headed down and Frank Lampard, his Chelsea teammate, swivelled to finish smartly. On to penalty kicks, and the two stalwarts, Beckham and Costa, both ballooned their efforts over the bar. By the time Darius Vassell, on for Rooney, walked up to the spot, Ricardo had taken off his gloves.

Vassell shot low to the keeper’s left, but Ricardo was sprightly enough to punch it away. Moments later, the keeper completed his superhero work for the night, burying the ball into the bottom corner to send England home.

If any of the matches this summer are as good as those we have dwelled over, we’re in for some sleepless nights.