Though born to parents steeped in theatre—Dolly Thakore and Alyque Padamsee—the young theatre director Quasar Thakore Padamsee is quick to distance himself from any direct parental influence in his choice of career.

Q Theatre Productions (QTP), the production house he launched with friends in 1999, has staged 20 plays and is currently busy rehearsing Project S.T.R.I.P., a comic examination of the plight of indigenous people. A theatre veteran of 14 years, the 30-year-old talks about five favourite plays that he has produced and directed. 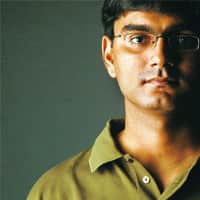 Minorities: We put up three short plays, all of them about the marginalization of minorities. The first is about a Holocaust survivor. The second, by the Australian playwright Alex Buzo, is about a Pakistani student in the US, and the third is about two students trapped in a toilet in Ahmedabad with the post-Godhra riots raging outside. I was feeling vulnerable in Mumbai after the 2002 genocide in Gujarat and this project emerged from there.

Khatijabai of Karmali Terrace: I adapted it from the Singaporean play Emily of Emerald Hill by Stella Kon, and based it on my paternal grandmother, encompassing the Khoja community of Mumbai. It’s a one-woman show about an orphan girl who marries into this wealthy family at age 14 and later becomes its matriarch.

Lucky One: A British play by Tony Marchant, set in a corporate office which I adapted to Mumbai, it is about four people who have good jobs and are supposedly leading a good life. But actually, they are just pushing paper. I had been working in advertising and had just quit my job, so I could relate to it.

Our current production. I haven’t worked like this before for five weeks now we have been meeting and rehearsing for 8-9 hours daily, and developing the script as we go along. Playwright Ram Ganesh Kamatham attends every day, takes notes and writes all night and then we try it out the next day. It’s a heady feeling.

Project S.T.R.I.P. will show from 16 June-5 July at the Prithvi Theatre, NCPA Experimental Theatre and Sathaye College auditorium in Mumbai.