Out of the kitchen

Out of the kitchen

Ritu Dalmia grew up in a home where the queen of ?the kitchen was Tarla Dalal. “The first book you get to see in a traditional Marwari household is one by Tarla Dalal," laughs the popular Delhi-based chef, who has lately turned author. Her first cookbook, Italian Khana, releases on 15 July. Dalmia says it’s still a thrill for her to open a recipe book and look at the pictures. She’s collected a large library of cookbooks at Diva, her Italian restaurant in Delhi. “I have cookbooks of every sort. We don’t cook from them, but they’re for the reference of my cooks and staff. It’s great for them to get exposure to different types of cuisines," says Dalmia, who employs only those who have not been professionally trained in the culinary arts, much like herself. 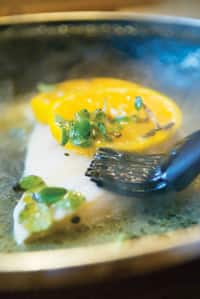 Books about cooking, though always popular in India, are no longer just about the recipes. Books by Dalal and celebrity chef Sanjeev Kapoor are practical, but they don’t make you salivate or fantasize. But one glance at Roli Books’ Food Path: Cuisine Along the Grand Trunk Road From Kabul to Kolkata, and you know you’ll have to see it through from cover to cover. Pushpesh Pant and Pakistan-based Huma Mohsin’s book, published in 2005, is an exciting ride along the GT Road, with delightful photographs of Pakistani truck art, roadside dhabas and recipes of dishes specific to each region the historic road passes through. A few pages later, you’ve left the bookstore and are speeding atop a rickety truck, scouring for the next dhaba.

Publishers such as Roli Books are commissioning titles on food that are as much about history and travel, and of course, photographs, as they are about food.

Pant, son of a linguistic scholar mother and a food-loving, physician father, says researching and writing about food (and eating it) is an obsession. He grew up eating sambhar one day, gathia another and Bengali fish curry on a third, so that explains his love for different cuisines. He has published books on Awadhi, Punjabi and Rajasthani cuisines as well as on aphrodisiacs. “I research food as I would Indian foreign policy," he says. 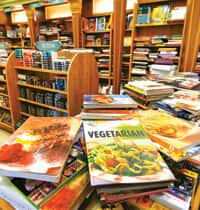 The food section at a Landmark bookstore (Photo by: Abhijit Bhatlekar/Mint)

A browse through the food and drinks sections at bookstores shows that though books by Kapoor, Dalal and simple tandoori-tadka type of titles are omnipresent, there are some books, such as Food Path, which you pick up just because they are so delightful (the publishers say this one sold exceptionally well in Pakistan too).

According to Nilanjana S. Roy, chief editor of Westland Ltd, one reason why books on food are becoming increasingly popular “is that food has become entertainment today. Eating habits have changed so much over the past two decades". Even about a decade ago, eating at home was still the prevalent tradition and the simplistic cookbooks available—with their no-nonsense recipes—reflected that. Today, exploring new regions and cuisines during travels is the way most of us satiate our culinary cravings, so books on travel and food, such as Pant’s, feed that need. Also, there’s a fear of losing cultural traditions and old recipes and methods of cooking, which encourages people such as Hussain to chronicle them. Nor is food immune to the lure of the celebrity. Books by celebrity chefs with TV shows, such as Britain’s Jamie Oliver and Nigella Lawson, always sell well. There’s something about Oliver’s face smiling from a shelf that convinces readers that maybe polenta really is a 10-minute job. “Some of the biggest sellers are the ones who are on TV. Readers identify with their personalities. Some of these cookbooks sell even better than fiction," says Hemu Ramaiah, founder and ex-CEO of the Landmark bookstore chain.

Closer home, Roli Books will release about 10 food-related titles in the coming year, while Westland has lined up about 15. So, make some space on your coffee table. “They’re not the kind of books which are necessarily kept in the kitchen," says Priya Kapoor, director of Roli Books.

For Random House, Dalmia’s is the first food book. Editor-in-chief Chiki Sarkar says the publishing house is on the hunt for similar cookbooks, which are stylish yet offer something relevant to Indian readers, like Dalmia teaches the fundamentals of cooking Italian in an Indian kitchen.

Dalmia says that’s what sets her book apart from foreign books on Italian cooking. She includes a list of stores in the metros selling Italian cheeses and pastas, the basic ingredients for many of the dishes, and suggests local options for some ingredients without compromising on authenticity. A sample: Try walnuts instead of pine nuts in pesto, but not almonds.

At the two-year-old Westland, food books are “a huge deal", says Roy, who had edited A Matter of Taste—The Penguin Book of Indian Writing on Food, released in 2004. “Food has powerful associations for all of us which go way beyond nostalgia," she says.

Roy claims food writing is a passion for her, so that genre is quite well represented at Westland. Coming soon are Simply South by Chandra Padmanabhan, which offers traditional recipes from four communities in south India, while Timeless Cuisine: The Harrisons Hotel Cookbook by Latha Kannan is a blend of traditional cuisine from the south and classic Raj recipes from one of Chennai’s legendary hotels, owned by the author’s family. Also on the cards are a singles’ guide to cooking, a book on recipes put together with organic ingredients and one about coming of age in a Mumbai kitchen.

Kapoor of Roli Books has also got enough coming up to keep readers hooked. Gourmet Journey of India will be much on the lines of Food Path; it is also authored by Pant, who travels through popular routes across the country and chronicles the food encountered on the journey. There’s also a title about Kashmiri food, with history and old pictures of Kashmir.

Looks like Dalmia will have to make additions to her library.