An evolved streaming solution from Google 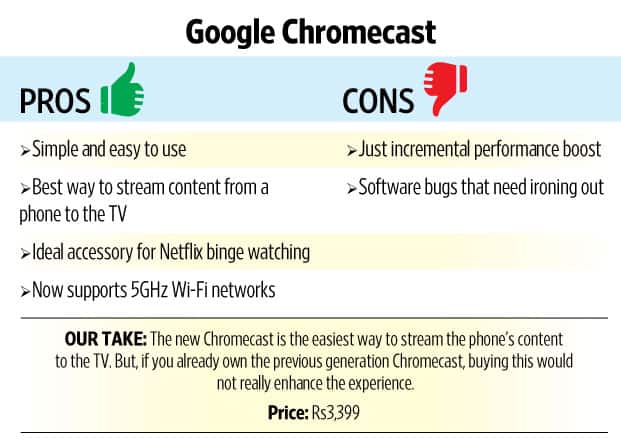 It was always going to be tough for Google to follow up on the fantastic first generation Chromecast streaming dongle, simply because it worked without complications, and with a wide range of apps.

But the new Chromecast has involved a complete design overhaul. The USB-drive-inspired design has gone out of the window; what you get instead is a small plastic puck with a flat HDMI cable. Plug this into the TV, connect the Chromecast to the TV’s USB port or a wall socket for power, and it switches on. Setting up the Chromecast is quite simple using the Google Cast app (free for Android and iOS).

While the new Chromecast is faster, it is an incremental change—Netflix and YouTube streams load a bit faster than usual. But a lot of that performance is actually dependent on how quick your smartphone or tablet is, as well as the speed of your broadband connection and Wi-Fi router. The new Chromecast can work with 5 GHz Wi-Fi networks (newer routers offer that feature), which will improve the streaming of High Definition (HD) video files. During testing, we noticed that the new Chromecast did at times completely ignore requests from an Apple iPad to stream a video from YouTube or Netflix—this indicates a software bug, which an update can solve.

The new Chromecast is a must-buy for someone who has been struggling to stream the phone’s content to TV. But for anyone who already owns the previous generation Chromecast, this isn’t genuinely an upgrade.