A message in bold stripes

A message in bold stripes

THERE might be a tiger around the corner on your next visit to the park. Not real ones—visitors to tiger reserves in India will tell you those are hard to come by—but artists’ renditions. Starting next week, the Artiger project will plant more than 50 fibreglass tigers in locations around New Delhi, possibly creating the most large-scale public art display India has ever witnessed.

This is the “Year of the Tiger" according to the Chinese calendar, marked by the world’s most ambitious effort in conservation so far: to double the number of tigers in the wild. With the current population estimated to be as low as 3,200 worldwide, wildlife organizations have stepped up their conservation drives. The art fraternity, it seems, is the latest on the conservation float. 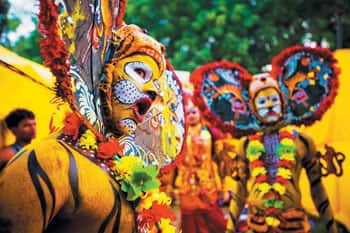 Asia House in London, the leading pan-Asian organization in the UK, also flagged off a major exhibition earlier this month. The exhibition, The Tiger in Asian Art, explores the tiger as a symbol of power and protection. The show covers work spanning 3,000 years, from the historical to the contemporary. This year’s edition of the Dastkar Nature Bazaar (21-31 October) in Delhi was themed on the tiger too. Two hundred stalls with artisans from 18 Indian states displayed crafts tailored to the theme.

With tiger conservation as the larger goal, each initiative has its own agenda. For Artiger, it was primarily fund-raising. Raising awareness via the exhibition of tiger sculptures in public places was a pertinent by-product.

From Seth’s accounts, the machinations were smooth. The plan was to draw up a list of artists who would be willing to produce tiger artworks gratis, pre-sell these to companies and donate the proceedings to the Ranthambhore Foundation—one of India’s most wellknown organizations in the field of tiger conservation. Each corporate house had to commit Rs1.5 lakh in return for a tiger sculpture that would come to them after a three-month public display period in parks, malls and public institutions. Seth says 50 tigers were sold in the first 48 hours itself. 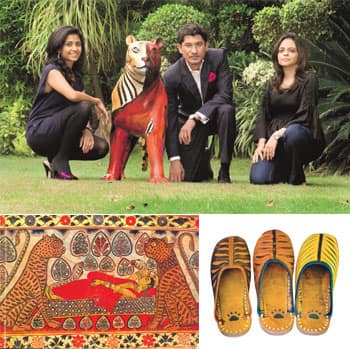 From the lair: (Top) (from left) Jain, Seth and Baig with an Artiger sculpture; (above left) a 19th century pattachitra;(right) and Rajasthani jootis at Dastkar. Priyanka Parashar / Mint

The Asia House exhibition, which includes works loaned from the British Museum and Victoria and Albert Museum, seeks to highlight the important role the tiger has played, and continues to play, in the human psyche. The works include large-scale works by contemporary Chinese artist Zhang Huan; a 1720 painting of a renowned Jaipur Hunting Scene from the James Ivory Collection; and one by the celebrated Japanese artist Katsushika Hokusai.Katriana Hazell, co-curator, says the works were selected to support the key themes of the exhibition: protection, spiritual and material power, folk and the hunt.

While the exhibition itself won’t generate funds, Asia House will host a benefit gala on 20 January to help three environmental agencies: WildAid, Environmental Investigation Agency and Born Free. A forum to debate possible solutions is also on the schedule. ART OF THE TIGER: The renowned Japanese artist, Hokusai (1760- 1849), painted ‘Tiger in a Snowstorm’ on silk in 1849, his 90th and final year. It depicts an aged tiger battling deep snow effortlessly, reminiscent of Hokusai’s own situation in the winter of life. Although physically weak, the artist was said to be strong spiritually and imbued with the inner strength of a charging tiger. On view at Asia House till 12 February.

Some activists have tangential approaches nevertheless. For Laila Tayabji, chairperson of Dastkar, picking the tiger theme had to do with artisans. “They’re the ones in close quarters with the animal; the ones who can say ‘no’ to demands for tiger skin, teeth, nail…," she says. When we visited Dastkar, Tayabji was judging a tiger art contest along with tiger conservationist Valmik Thapar. An array of submissions from participating stalls were in competition: a leather puppet from Andhra Pradesh, jootis from Rajasthan, a tiger fashioned out of dried gourd from Chhattisgarh. At another end of the fair, cultural performances featuring the tiger were in progress. There were the behrupias from Rajasthan and the energetic bagh nritya (tiger dance) from Orissa. The bagh nritya, a folk enactment of man and animal encounters, ended with the tiger killing the hunter as an actor dressed as the goddess looks on. “The goddess is watching the poachers," warns Narayan Mahayana, a fifth-generation exponent from the Bhanjnagar district of Orissa. Mahayana ended the performance with a musical plea to revere the tiger, a message that has played in his rural community over generations.

Likewise for Thapar, restating the relevance of the tiger to human civilization is key to tiger activism. Thapar has authored 18 books on tigers and wildlife and is just out with another, The Tiger: Soul of India (Oxford University Press), which explores tiger imagery through the years. From 10,000-year-old cave paintings in Madhya Pradesh to Mughal miniatures, his book shows how the tiger was vital to the life of people across India. Thapar’s work at the Ranthambhore Foundation, of which he is the founder, involves reacquainting craftsmen with historic tiger representations from their own region. Today, there are at least 800 shops in that region that sell tiger-inspired art and craft.