Home / Mint-lounge / Chetan Bhagat | The five-point formula: keep it simple
Back
Share Via

In a nod to the literary trick favoured by this week’s Business Lounge subject, let’s start at the end.

Fifteen years from now, twin teens named Ishaan and Shyam meet a girl named Naya on a non-stop flight from Delhi to Boston.

“Do you believe compassion is the greatest virtue?" Ishaan asks Naya.

“Well, do you mind sitting in between me and my brother? I can’t stand the middle seat."

Naya agrees; after all, they are both cute.

“Where are you heading?" Shyam asks.

Over the next 15 hours, they learn that her mother and their father are both writers, one a journalist, another an author. Piecing together a few facts, they realize their parents have even met: One Morning@the India International Centre.

“In May of 2008, after your father’s third book was released," Naya remembers. “My mother’s first words were…

I met Chetan Bhagat on the day he would launch his new book, The 3 Mistakes of My Life, at a Big Bazaar in Gurgaon.

Yes, Big Bazaar. Right next to the jeans and groceries, priced at Rs95; “it’s an impulse buy," he says. “But my friends are, like, ‘Big Bazaar?’"

He responds to their chagrin and my first question before I can ask: “I need to reach my readers. And 60% of my emails come from small towns. Sure, Oxford and Crossword are in Delhi, but what about Bhubaneswar?" 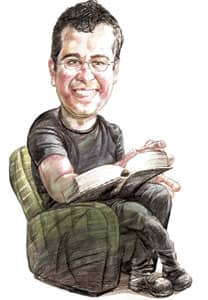 Limited vision: Bhagat believes India is not a place for dreamers, but should be. (Illustration: Jayachandran / Mint)

But keep scrolling through comments and the writer’s own website and you’ll come to readers who gush: “m a really big fan of ur writing nd ur books…. d fact tht u r so good bt equally modest makes u a wonderful writer…"

See, the SMS generation ain’t so literary either.

Seconds into our meeting, any presumptions I had that Bhagat’s Delhi roots, coupled with success, might somehow make him, well, pretentious, melted away. We began in the coffee shop, which has no mobile, no camera, no loudness rules, so, before we can even sit down, Bhagat says, “Shall we go to my room? This place is for 70-year-olds."

He changes into a different shirt for the camera, orders a round of five nimboo paanis and sits down. Never mind that there are only four of us in the room: Bhagat, his mother, me, Mint’s pony-tailed photographer who, I proudly point out, also happens to be an IIT grad.

That’s, of course, where the whole thing began, when a 20-something, seven-point-someone, Chetan Bhagat wrote Five Point Someone: What Not to Do at IIT about three engineering students who arrive at the elite institution only to find their classes rigid and boring. It went on to become a best-seller, an implicit indictment of the Indian education system.

Then came One Night@The Call Center in 2005, which first led me to reach out to Bhagat when I was reporting on India’s economy for a US newspaper. That book, about a group of workers who get a call from God one night, also achieved best-seller status.

As Bhagat has grown up—IIT to IIM, i-banker to father, irreverent to reflective—so, too, have his books. The 3 Mistakes of My Life takes readers into that ever-familiar terrain of friendship but it is clear, from the rendering of the main character’s own business ambitions to the love scenes, that Bhagat has matured as a storyteller.

Even now, Bhagat, the son of an army officer and a scientist, has this aura of “I can’t believe it’s all turned out this way for me". But he’s also made his own luck. The businessman details how stuffing 150 books into boxes versus the standard 100 books helps save money on cartons, enabling publisher Rupa & Co. to price the book low.

In The 3 Mistakes, three friends band together to open a cricket shop. But, against a backdrop of the terrorist attacks of 11 September and the 26 January earthquake, the Godhra attacks and ensuing riots, pursuing entrepreneurship in Ahmedabad is not so simple.

“I checked myself from dreaming again. India is not a place for dreams. Especially when you have failed once. I finally saw the sense inherent in the Hindu philosophy of being satisfied with what one had, rather than yearn for more. It wasn’t some cool philosophy that ancient sages invented, but a survival mantra in a country where dreams are routinely crushed," protagonist Govind says on page 115.

The common guy’s boyish banter remains central to Bhagat’s shtick: “I don’t do 10 pages on how to tie a Bengali sari. I don’t describe how characters look. Let the reader decide."

Still, because his stories have an accessible, everyman feel, I can smell and picture their world: cigarettes, alcohol, sweat, scooters, takeout tikka and home-made chakras and curries. As Bhagat and I agree, they are our cousins, the aam aadmis of a new generation. “I have Mr Approachable written right here," Bhagat says, gesturing at his forehead. “Readers come up to me and say, ‘I didn’t like Priyanka’," the main character’s love interest in One Night. “Can you imagine going and telling Mr Salman Rushdie something like ‘Shalimar the Clown, what the (expletive) was up with that?’"

But, will a book set against Hindu-Muslim tensions have the same sway over Indian youth as IIT and call centres? And this time, God’s not talking to anyone by telephone; he’s represented in the entire saffron brigade.

The 3 Mistakes of My Life comes amid the triumph of two Modis: Lalit (as in the vice-president of the Board of Control for Cricket in India and the mastermind of the Indian Premier League) and Narendra (as in the re-elected chief minister of Gujarat).

But the story in Gujarat, Bhagat says, is not Modi. “He’s just an elected guy. It’s the people’s choice," he says. “The question is: Why are people thinking that way?"

Like his writing, Bhagat’s ideas are nothing particularly deep or profound—but he oozes sincerity. It’s almost cheesy, but hey, I’m a fan.

“Young people don’t find it cool to discuss politics... We want to be rich. That is the agenda we need to adopt. If we have this Hindu-Muslim issue, this Maharashtra versus non-Maharashtra, it will never happen," he says, voice rising. “Drop it for the greater cause… I have not seen a developed nation where people spit on the street. Why is my country like this?"

Two months ago, Bhagat moved back to India from Hong Kong to take up a job with Deutsche Bank in Mumbai, working in stressed debt. He also plans to dabble more in entertainment; he wrote the screenplay for Hello, this summer’s movie based on One Night starring Salman Khan.

Really, he doesn’t have to work any more (although he wouldn’t tell me how much money he’s really made off these books) but two things keep him going: a desire to live a real life, crossing roads, hailing cabs, making small talk in the lift. And then, there’s male ego: His wife, also an Indian Institute of Management, Ahmedabad, graduate, is the chief operating officer at UBS India. He needs to keep up.

Bhagat laughs when I ask what it’s like when two IIM grads run a household; PowerPoint to potty train three-year-old twins, Ishaan and Shyam?

“My daughter is the same age," I tell him. “How on earth do you manage?"

“We have a whole army at home," he says.

We wind down as another reporter arrives. Bhagat schedules book readings and media interviews on weekends. On Monday, he has to report back to work.

“Do you really work?" I ask. “I mean, Chelsea Clinton says she works at a hedge fund, but I don’t think anyone really knows what she does."

I can tell he’s not sure he likes the Chelsea comparison. But for the first time in our 90 minutes together, Bhagat gets self-important. “Hey, I’m a really senior guy!"

“Got it," I back off. “Aren’t your colleagues in India star-struck then?"

“I don’t want to talk about my books in office," he says. “I’m also a very chilled-out guy."

“Ladies and gentlemen, please fasten your seat belts as we are beginning descent on Logan International Airport…"

“Hey, wake up," Ishaan nudges Naya. “We’re landing." Sleepily, Naya says: “Don’t forget to give me your number. Maybe we should put our parents back in touch, too."

“Well, you’ll meet our dad this semester. He’s a guest speaker at Harvard for this class called Great Indian Literature: Its Role in the Rise of a Nation…taught by Salman Rushdie."

Work Profile: After graduation, Bhagat joined Peregrine Investment Holdings, which went bust six months into his stint due to the Asian financial crisis. He then joined Goldman Sachs and served as an associate in Hong Kong till 2004. In 2005, he joined Credit Suisse in Singapore for a year, then returned to Hong Kong to work for Deutsche Bank. He moved to Mumbai with Deutsche Bank in March