The (auto)‘rakshasa’ vs the citizen

Asharp-fanged, dark-skinned “auto-rakshasa" demands one-and-a-half fare. The commuter is “harassed". An organization called Change.org uses this image as part of a petition in which they urge an assistant commissioner (ACP) of Bangalore police to create “an efficient system" so that complaints made to report auto drivers who overcharge or refuse to ply can be tracked. How, it asks, can “concerned Bangalorean citizens" expect “justice" if their complaints are not tracked? We all must, it urges, “join the fight".

Divided by the meter: An autorickshaw in Bangalore 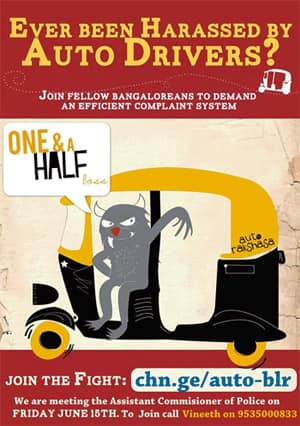 The poster showing the auto-rakshasa

Let me take an example from housing. Rich people who build illegal houses make “farmhouses" and “unauthorized colonies". Poor people who do the same make “slums". In a campaign against “illegality", only one of them gets demolished. Only one is called an “encroacher" and a “pickpocket". Only one of them can be a “rakshasa", the other gets to be a “citizen".

But the campaign writers may rightly say, “We are not against auto drivers—it is about complaining against those that overcharge." Does then a campaign’s representation, these words, this cartoon (ahem) really matter that much? It does. These imaginations, names, words and aesthetics alter, narrow and limit urban politics. You cannot see a rakshasa as another citizen who lives in your city. There was an alternative way to run this campaign: to sit with associations and unions of auto drivers and come to an agreement. To find out if auto fares are reasonable, high or low. To figure out community mechanisms to prevent non-metered travel. To, if that’s what came out of the engagement, support campaigns for metre fare increases as inflation, prices and petrol/gas increase. To work out a periodic shock-absorption surcharge for periods with very high gas prices. To find out why it costs four times as much to own and register an auto than a Tata Nano. To find out what the daily rental of the auto driver is that he is trying to make up in his 12-hour shift. To figure out why his fares are regulated though the rental he pays isn’t. To consider, quite simply, the auto driver as a person and a citizen rather than a criminal or a rakshasa. To find out how the institutions the petition is angry at have failed him just as much and, most likely, with much deeper consequences.

Instead this campaign pits “concerned citizens" against “auto drivers" that are, as the image suggests, always already criminal. It repeats the mistake of multiple recent middle-class campaigns for “economic justice" and “social change". These campaigns increasingly target a particular set of issues—for example, corruption or security—that should concern all of us but because of the way they are defined and articulated instead exclude what is a majority of our urban citizens.

Where do such images come from? Let me trace just one possible thread. In another context, Leela Fernandes, a US-based associate professor of political science whose most recent book is India’s New Middle Class: Democratic Politics in an Era of Economic Reform, has argued that Indian cities are defined by a “new urban aesthetic of class purity". She was referring to new forms of elite-built environments, from streets cleared of the poor, gated communities and enclosed malls, and parks where one can walk and play but not sleep and work. Yet this aesthetic doesn’t just manifest itself in the built environment—it is part of an elite urban politics that cannot imagine the poor as fellow citizens.

Elite and middle-class campaigns thus become something altered—they are reduced to the protection of what Fernandes calls a “lifestyle". Not the Right to Life, but the Right to Lifestyle. In the protection of this lifestyle, the working poor cannot exist as fellow citizens with rights and dignities. Their concerns cannot be part of the conversation. They are rakshasas that take resources from the state, are the sole reason for public debt, encroach on public land, burden the government for “handouts", and pollute and dirty the city just as they take hard-earned tax money taken away from its rightful heirs.

The responses that these campaigns seek can understand “economic justice" only in the form of punitive and disciplinary punishment for the always already criminal poor. In this particular campaign, the only possible result is a deeper surveillance and harassment of auto drivers by law enforcement—no other interaction is possible, no other solution is conceived. Herein lies the tragedy. What is this campaign fundamentally meant to be about? It is about what happens to a complaint made to a public institution about a service. It could relate then to other, larger campaigns about getting public institutions to work and be accountable to all parts of what makes our urban public. The auto driver is as interested in this question as you or I, yet he is excluded, in this frame, from asking it. Worse, he is held responsible for it.

Many campaigns of and by the poor often make the same mistake. Many of them tend to demonize, for example, all things short-handed as “private". This means that possibilities where private provision could be more egalitarian than the public become foreclosed before they are considered even though the “private" could also mean small-scale enterprises, informal associations, and even unions—not just mega-conglomerates. This is what rakshasas do: They draw lines of fire we cannot cross either in our minds or our politics. At stake are our increasingly polarized urban polities and the movements and campaigns that emerge from them and abound with rakshasas.

Finding a political space and language that can cross entrenched inequalities is perhaps impossible but nevertheless what we must continuously strive for. The challenge before us is to understand how the possibility of asking interconnected, larger questions that truly reflect the complexity of our “public" can emerge even if they take, at first, simply an act of protest like these words against the reduction of a fellow citizen to a rakshasa.

Gautam Bhan teaches urban poverty, planning and politics at the Indian Institute for Human Settlements in Delhi and Bangalore.

This piece originally appeared on Kafila.org.