International headlines on Pakistan are uniformly negative. Political upheavals, violent clashes, suicide bombings: The list goes on. But a flurry of upcoming art shows may begin to change the global conversation about the country.

“Art flourishes in the worst of circumstances. We have issues to talk about. We have issues to engage with," says Salima Hashmi, curator of the exhibition Hanging Fire at the Asia Society, New York, which opened on 9 September. “The spotlight on Pakistan is very different internationally, and specifically in the US. This is an opportunity for us to talk to them." 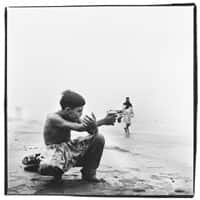 The show is the first US museum exhibition of contemporary Pakistani art, but it is not the only place one can find Pakistan in New York this month. A gallery show at Aicon Gallery presenting artist Farida Batool began yesterday. And Christie’s has an auction of modern South Asian art, featuring 10 Pakistani artists, on 16 September.

Pakistani contemporary art has slowly been building momentum in the international art market, especially since the 2005 Beyond Borders show in Mumbai. In fact, Melissa Chiu, director of the Asia Society, says Indian collectors have helped foster and support the fledgling Pakistani art community with their patronage. Anupam Poddar, founder of the Devi Art Foundation, New Delhi, has been one of the largest purchasers of pieces from Pakistan. He plans to display some of them at an exhibition curated by Pakistani artist Rashid Rana in New Delhi in December.

According to Pakistani art critic Quddus Mirza, the contemporary art scene has taken shape over the past 10 years. Hashmi agrees, “We’ve seen a great burst of energy." A big emphasis has been on the reinterpretation of Mughal miniatures. Encouraged by artist Zahoor ul Akhlaq, who died in 1999, artists began to contemporize this traditional form. Hashmi included Akhlaq in the Hanging Fire show because of the strong impact he has had on the Pakistani art world. “So many of us benefited from being his contemporary. There are about four artists in the show who were directly his students. And then there are third-generation artists who were mentored by those students."

Mirza says one of the greatest strengths of the contemporary art scene in Pakistan is this continuity from teacher to student. Prior to 1990, there was only one art school in the entire country, the National College of Arts in Lahore. “It is really a closely knit society," he says.

But “there is no great policy of the government, of the public, of the market to shape something into ‘Pakistani Art’", says Mirza. “So there is great confusion, which is also a great infusion. You blend times, genres, methods, techniques; it has really enriched Pakistani art." 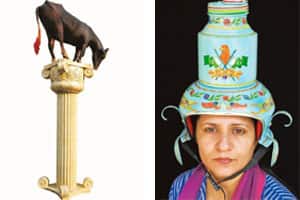 Chiu says the idea of hosting a Pakistani show at the Asia Society came to her several years ago when she saw the popular miniature work at a gallery show in New York, but she quickly realized she wanted to show more than just the reinvention of the miniatures. Over 50 works by 15 different artists are now on show, ranging from the large-scale installations by Adeela Suleman and Hamra Abbas to the miniature work by Imran Qureshi.

While there are artists involved in miniature tradition innovation, including a piece installed in the museum specifically for the show by Qureshi, there are pieces from a variety of mediums. Arif Mahmood showcases photo documentary work. Huma Mulji has installed her statues of cows suddenly caught on top of neoclassical pillars, a playful look at the clash between rural life and modernization in the suburbs of Pakistan. And Rashid Rana has displayed the photomontage work he is known for.

There are some pieces that Hashmi picked that are geared to speak specifically to an American audience, such as Bani Abidi’s video installation Shan Pipe Band Learns ‘The Star Spangled Banner’. Abidi paid a Pakistani wedding band to learn the US national anthem. She recorded their hearing the song, their practices and their final performance, which Hashmi says comes off just slightly off-key, creating a unique, humorous conversation about US-Pakistan relations. Abidi says the men in the band do not come off as pitiable. They find the whole process funny as well, so the audience wavers about “who the joke is on". She notes that the brass bands are actually a relic from the British colonial period; the Shan Pipe Band was originally a Scottish band. The Principal of Delicacy by Anwar Saeed. Photograph courtesy The Asia Society

Critic Mirza says that art has moved away from specific motifs into more universal themes. “What I find is very positive, artists are not assuming positions; saying what is right or what is wrong. It doesn’t provide solutions." Hashmi says it was a concern of hers that American audiences would impose symbols on the work. “They’re looking for kind of pegs in the art to hang their preconceived notions on." She hopes the show won’t leave room for that, and will instead introduce the artists’ individuality and vibrancy to a broader audience. Hanging Fire is on at the Asia Society Museum in New York until 3 January; Farida Batool will show at the Aicon Gallery, New York, until 10 October; Christie’s South Asian Modern+Contemporary Art auction will be held in New York on 16 September