The first sight of snow triggers an avalanche of memories, recollections and nostalgia

I was 27 years, one month, and three days old when I touched snow for the first time.

It had been a long wait. I had taken an overnight bus from Bangalore to Hyderabad, a day-and-a-half-long train journey to Kolkata, an overnight train journey to New Jalpaiguri, and a-day-and-a-half-long bumpy drive along a mud-and-rock-road to north Sikkim. Four days, 2,660km and six halves of the antiemetic tablet Avomine later, I had come far enough to see my dreams of snow crystallize into the here and now. I was standing along the snow-choked Gurudongmar Road in Sikkim, worried that my tears would freeze to ice.

The friends I was travelling with and I had one thing in common: None of us had seen snow before. We—two Malayalis, two Kodavas, one Chennaiite, and one Bangalorean (me)—had all dutifully gone on Kullu-Manali/Darjeeling holidays with families over the years. We had been content to look at the distant snow-capped peaks without ever touching or seeing snow up close. And so, our mission on this trip was to travel to Sikkim’s famed Lake Gurudongmar—the country’s second highest freshwater lake, at an altitude of 17,100ft, in the Kanchendzonga (Kanchenjunga) range of the Himalayas, frozen over by early March—to claim the ultimate glittering prize that had eluded us all these years.

At 6.30am, the AccuWeather app on my smartphone read 2 degrees Celsius. I paced the balcony of our home stay with a cup of yak milk tea. Just metres away, row upon unruly row of snow-dusted pines defied gravity to stand at attention on mountain slopes. A road traced its way around the mountain, wound like buntings on a Christmas tree.

I swallowed another half of Avomine.

Fortified with two T-shirts, a sweater, a sweatshirt, and a couple of scarves, I joined the others as we bundled ourselves into the jeep. Each of us sighed, lost in private fantasies of what the frozen lake would look like. We would have stayed in our worlds, if it weren’t for the view.

Gurudongmar Road ribboned together mountain after snow-heaped mountain. Scraggy, snow-covered arms of oak reached out to the sky. Pine cones drooped, heavy with icicles. Blades of grass wore diamonds. In the gorge far below, the slate-emerald Teesta river winked in the soft sunlight. The snow on the road ahead went from muddy to sullied by occasional tyre-tread to plush white duvet. At about 40km from the lake, our jeep began to fishtail. The driver killed the engine and looked out of the window, thoroughly bored—the universal sign for “This is it. We aren’t going any further."

Snow, I soon found out, does not crunch. 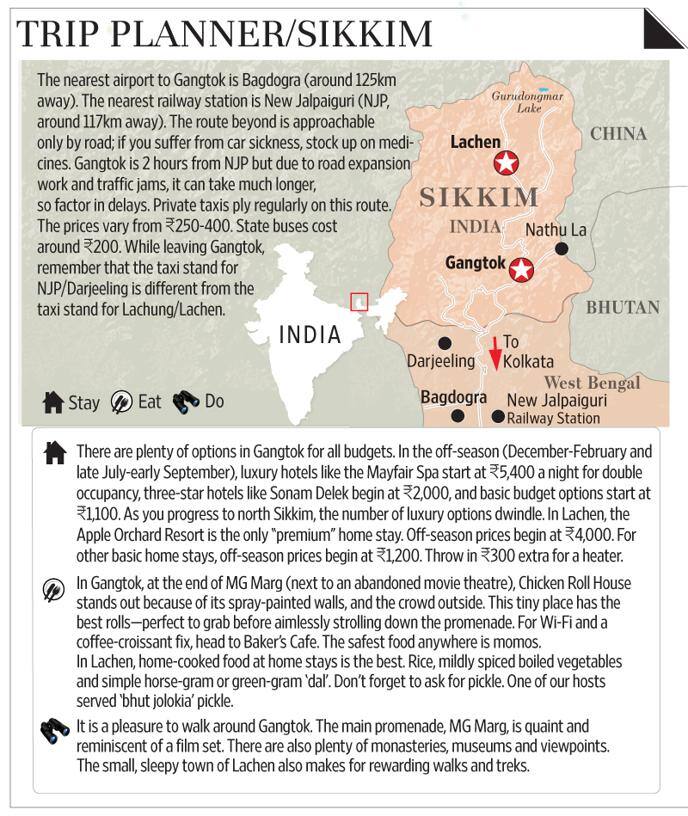 The early March sun’s warmth touched my ears and told me this spectacle of white was a daily miracle; a transient one that would melt soon, so I must grab this newness with both hands—hands that I promptly de-gloved and plunged into this inviting blanket of cake-icing. Every substitute I had made do with in my playing years—soap-suds, cotton, foam, crystal salt, bubbles of thermocol—all failed as points of reference to process this new, bewildering texture. I didn’t know where the snow-flake ended, or where the flurry began. I threw a handful up in the air and watched it disintegrate and fall, catching at my hair and eyelashes.

How familiar is the rest of India with snow? What is Indian snow like? Is it as mercurial as its sibling, the Indian rain? What does snow mean to those of us so far away from the Himalayas? I thought of the word for snow in my mother tongue, Kannada, which borrows the Sanskrit word, hima. Hima, which is the root of the word himalaya, had now become the derivative of it. It was how my grandmother likes to say, “Hima is what you would find on the Himalayas."

Reaching snow anywhere in the subcontinent takes considerable effort. Snow dictates its appointments; who it meets, when, where, and how. Snow is found almost only in the six Himalayan states—Jammu and Kashmir, Himachal Pradesh, Uttarakhand, Sikkim, the northern-most wedge of West Bengal, and Arunachal Pradesh. And only March favours snow tourism. Too early, and half the roads and viewpoints are shut. Too late, and the snow has thinned or melted. Perhaps this inaccessibility, this whimsical nature of snow, is why it is perceived with some exoticism far down the country. Informing friends and family of trips to these northern states usually invites an, “Oh! So did you see snow?"

Down south, snow has a “foreign" status that’s usually reserved for travelling abroad. It is so far removed from our understanding that until online shopping, looking for snow-gear was an expedition in itself (Bangalore, for instance, had only Commercial Street’s Eastern, and eventually Western, stores to turn to).

For couples of a generation, snow was a special aspect of honeymoons. And now, snow calls forth associations with gruelling mountaineering, and increasingly, Bullet rides. Having seen snow was once an accomplishment, much like having travelled by air before the 1990s. Now, having seen snow is a sign of being well-travelled, of being possessed by modern-day wanderlust.

Back in the jeep, dusting snow off my elbows and knees, I struggled with how to articulate, translate, and internalize this quick-melting poem in my hands. A cold breeze tugged at a few snow-heavy branches overhead and stirred a pitter-patter. This was it: my first, private snowfall. And I found myself humming Vairamuthu’s words, scored by A.R. Rahman for the 1992 film, Roja.

Amulya Shruthi works at being a professional describer of feelings. She lives in Bangalore.