Signs of the times

Signs of the times

Corporate headquarters are more than just buildings, they are emblems of a company’s aspirations, its work culture, and its standing among peers. Crisil House is a classic example.

The completed facility, formally inaugurated in March, is the new headquarters of financial analysis company Crisil, located in the Hiranandani Business Park in suburban Mumbai. Its construction, design and layout speak volumes about the company’s approach to its business and its employees. Yet Crisil House stands for more.

It symbolizes three important trends shaping contemporary urban Indian architecture: the green building movement, the popularity of mixed-use real estate development, and a neoclassical architectural style. For many architecture and construction professionals, all three are controversial.

Crisil House grew out of a desire to consolidate 14 existing offices into one location, says Roopa Kudva, managing director and chief executive officer. Rapid growth over the last decade had resulted in scattered offices, necessitating an independent building for its 1,200 employees, with adequate room for future expansion.

Management was understandably keen that the space should reflect the company’s reputation for independence and credibility, and showcase “that we are more than a ratings company, we are a diversified analytical platform", says Kudva. It was also an excellent opportunity to enhance employee well-being.

The building’s design reflects these concerns. A careful balance has been struck between providing opportunities for employees to mingle, without compromising on the privacy that is necessary for a ratings and research company. A 10,000 sq. ft central atrium visually connects the building’s nine floors. It is accompanied by strategically placed indoor terrace gardens where employees can take a coffee break, notes Arun Panicker, senior director, operations, who enjoys being able “to walk out on to any of these floors, make eye contact and wave out to someone from the other part of the business". At the same time, individual floors have strict access control to ensure that firewalls are maintained between the different arms of the business (such as ratings, research and advisory services).

Crisil House has generous amenities—nearly half of its built-up area comprises common facilities, including a cafeteria, gym, recreation centre, library and parking space. Workspaces are egalitarian—desks in the open-plan offices are sizeable, at 4.5 x 5ft, and only the top echelon have private cabins. 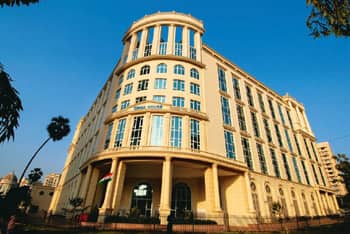 Despite these efforts, it may not satisfy local definitions of a green building. The building is currently awaiting a platinum LEED (Leadership in Energy and Environmental Design) rating, and in many ways, aptly illustrates some of the controversy surrounding LEED in India. Few of the building’s energy needs are generated by solar panels (a mandatory criteria for Green Rating for Integrated Habitat Assessment, or Griha, a home-grown green building rating system). Much of its LEED-compliant materials and equipment are imports, including workstations, glass for its facade, air conditioning and forestry-certified wood, adding to the building’s carbon footprint. Hafeez Contractor, Crisil House’s architect, himself dismisses LEED as a “fad". “We’ve been doing green buildings all along, without a rating system," he says.

More notable are the company’s visible efforts to be green in spirit, rather than just in letter. This represents a significant lifestyle change for employees. For example, there are just two printers on every floor to minimize paper consumption, requiring some people to walk as much as 400ft to get a printout, says Panicker. To ensure segregation between dry and wet garbage as per LEED rules, employees can no longer drink tea or coffee at their desks and must gravitate to common areas for beverages.

Crisil’s new home also captures the ubiquitous trend of mixed-use, often high-end, real estate development across the country. Kudva states that the location was chosen for its land availability, proximity and affordability. Hiranandani Gardens, which began life in the late 1980s, was the first integrated township of its kind in India, offering housing, commercial spaces, a school, hospital and parks. Since then it has attracted praise and criticism in equal measure, for a number of reasons.

Partha Mukhopadhyay, urbanization expert and senior fellow at the Centre for Policy Research, New Delhi, feels that while every city has high-end housing, it is important for such developments “to carry their load in terms of contributing to the demands they make on the city’s infrastructure". This township’s self-contained model has been replicated by developers across the country. Niranjan Hiranandani, co-founder and managing director of the Hiranandani group, cites the township’s numerous awards, describing in particular “the largest sewage treatment plant in Asia" and efforts to re-develop neighbouring slums to make it more inclusive.

Crisil House’s imposing facade was designed to integrate with Hiranandani Gardens’ neoclassical architectural style. Contractor says he was the first to adapt classical architecture to modern, residential, high-rise buildings, spawning a national trend. “It is a timeless design which will never age," agrees Hiranandani.

The design is purely decorative. While Crisil House appears to be inspired by stone-clad, colonial-era buildings, its pillars and walls are merely painted concrete. Its stately, old-world exterior is also aesthetically disconnected with its entirely contemporary interior. However, although Hiranandani Gardens’ aesthetic can be construed as superficial, its makers have successfully sensed the pulse of urban India. The township remains one of Mumbai’s most aspirational suburbs, aided by its grandiose style.

As the symbol of a mid-sized company’s efforts to unify itself in a green, employee-oriented facility, Crisil House is laudable. As an example of modern Indian architecture’s ability to carve its own identity in a post-colonial, globalized world, its success is less apparent.