Shor in the City

In the monsoon’s aftermath, when synthetically varnished, multi-hued Ganesh idols and rapturous devotees tom-tom the streets of Mumbai, three petty criminals and those in their hyperlinked radii unleash some more chaos. Ambition, exasperation and love force five itinerant men into desperate means—they have to make a kill, change their fortunes, change their lives. The premise and backdrop of Shor in the City, a comic thriller written and directed by Raj Nidimoru and Krishna D.K., allow them to juxtapose an exciting narrative of the city with some ordinary and absurd human situations. The humour, which is the story’s propeller, is clever and universal.

Shor in the City is entirely a writer’s film. Nidimoru and Krishna are not ambitious in scope. The appeal of the interlinked stories is in their inherent foolhardiness. The characters don’t have backstories; they are simply creatures of the mean city. Everybody has a master and some means that can change their destinies, and while they try to manipulate things to their advantage, we get glimpses of what they might have been. The multiple-story narrative obviously works without much exposition and much depth, and the writers of Shor in the City compensate for the format’s limits with interesting situations and some crackerjack dialogues. Characters don’t have elaborate graphs, but they have caprice. 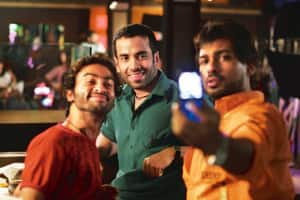 Mumbai masala: Shor in the City is entirely a writer’s film.

Tilak (Tusshar Kapoor), Mandook (Pitabash Tripathy) and Ramesh (Nikhil Dwivedi) run a business of pirated books. They buy the latest best-sellers from book stores and replicate them to sell at traffic junctions. They’re also thieves. On an ordinary day, they steal a bag from a local train which contains pistols, a gun and an explosive. These become a liability because they are not smart enough to use them to their advantage. They work for a local bhai (Alok Chaturvedi) who, in turn, serves another small mafia. Tilak is married to Sapna (Radhika Apte) who, as he discovers, is surprisingly ahead of him. She has read Paulo Coelho’s Alchemist much before he even struggles to read it. Tilak’s introduction to Coelho is a life-altering moment in his life, and the scenes where the writers establish this are infused with sympathy and humour.

In the same neighbourhood, a young cricketer Saawan (Sundeep Kishan), in love with a girl who is being forced into marriage by her family, is struggling to find bribery money for his last chance in the Indian Premier League (IPL) selections. He even considers robbing the neighbourhood bank. A few matchbox apartments away, Abhay (Sendhil Ramamurthy), an American-Indian with a mysterious past, is taking a second chance with his life by trying to set up a small business in the city. But he is thwarted by the neighbourhood’s extortionist economy, fuelled by a mafia that we never really get to see. Abhay’s girlfriend is an American-Indian model (Preeti Desai). The fortunes of all these characters collide through 10 days spanning the annual Ganesh festival, celebrated raucously in the city, leading to a melodramatic blowout.

There’s much more to the city than any insider can ever grasp; the city is much bigger than you—climactic enough, although nothing illuminating as far as the “Bombay Film", or any big-city film, goes.

The performances, and the directors’ control over its pace and scenes, keep the film’s momentum. There are some sequences which keep going purely on the basis of performances. All the actors are convincing, including Kapoor, whom we have only seen doing brain-dead slapstick. Apte, Dwivedi, Chaturvedi, Ramamurthy, Kishan and Girish Oak are in character, uncompromisingly, till the end. Desai has a short, ornamental presence. Tripathy is a brilliant comic actor.

Shor in the City is a genuine entertainer—another rare triumph of the small, writer-driven film. Stark: Juhi Chawla (left) and Manisha Koirala in I Am

All four stories are based on the central character’s most defining (mostly in a traumatic way) moments and how they damage and shape who they are. The writers, Onir and Urmi Juvekar, are unflinching and sentimental about their subjects. There are no punctuations or irony in them. The subjects themselves have a black and white quality to them.

Despite the monotone sensibility and simplicity of technique, I Am is a triumph. Onir didn’t find a distributor for the film for a long time, until people from across the world pitched in to make the release of this film possible.

The four stories are I am Afia (Nandita Das and Purab Kohli), I am Megha (Juhi Chawla and Manisha Koirala), I am Abhimanyu (Sanjay Suri and Radhika Apte) and I am Omar (Rahul Bose, Arjun Mathur and Abhimanyu Singh). Some performances stand out: Singh as a policeman in Mumbai, Mathur as a hustler, Apte as a friend of Abhimanyu who was sexually abused by his stepfather, and Anurag Kashyap in the role of a paedophile.

The director seems oddly removed from the Kashmir narrative and he is best in the story of Omar. Abhimanyu’s story packs in layers of emotions in a short story and because of the film’s linear style, it does not quite have the bite. Omar’s story is heart-wrenching, stark and powerful. This is the first real story about discrimination against homosexuals in Hindi cinema.

Shor in the City and I Amreleased in theatres on Friday.