I turned 50 this year. It was a milestone that one can feel quite ambivalent about. In cricket, batsmen raise their bats when they reach the half-century mark and quickly buckle down again in anticipation of the ton to come. Of course, the odds of making a century are usually well below 50%, and so it is in life—it is unlikely that you will live to be 100. So, often the reality belies the hope. 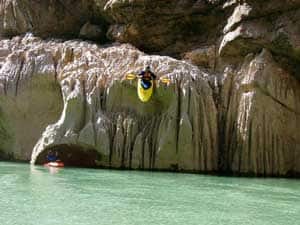 A rafter slides off the rock into the river.

One of my passions is white-water rafting. I had done plenty of the usual weekend jaunts to Shivpuri, Madhya Pradesh, but I really got hooked on rafting when I went on my first major expedition on the Siang in Arunachal Pradesh. This was the first “open" descent of a magnificent river with some huge class IV+ rapids and it was an unforgettable experience that included some out-of-control raft flips in massive white-water. Contrary to popular perception, rafting, unlike mountaineering, doesn’t require much preparation, training or fitness. But the adrenalin surge when you are battling the rapids is incomparable.

I was toying with the idea of doing the Zanskar in Jammu and Kashmir, the only big Indian river that I hadn’t been on. Then like the proverbial bolt from the blue came the call from Jed Weingarten, the American river guide who had been with us on the Siang in 2002. After the Siang, Jed had gone to China and pioneered commercial rafting on the Yangtze and several other rivers. In an instant, I knew that this was what I had been looking for.

Way back in high school, I had first heard of Yangtze Kiang, China’s greatest river, and the romance of the “Son of the Ocean" had stayed in my mind ever since. What lent the trip added urgency was the fact that it was the last time that this section of the Yangtze would be rafted because of the mega-hydro projects coming up downstream.

Once those projects were complete, they would flood the spectacular canyon, submerging its wild beauty forever. I’ve always been a great believer in the maxim carpe diem, in both personal and professional life. So it was with the Siang, and so it was to be with the Yangtze. That eureka moment had come again.

The actual river journey through the Great Bend canyon proved to be less eventful than the Siang. Jed said the Yangtze was lower than he had seen it in five years, so the rapids were impressive though, not awesome—still enough to get the adrenalin flowing and give us some thrilling moments. What took my breath away was the untouched beauty of the landscape as it gradually unveiled its secrets to us.

As we penetrated through to the very heart of the canyon, its soaring walls seemed to close in on us like an ancient secret cloister leading us to an unknown fate. Endless stone curtains of purple and black were streaked with russet red where the rich seams of iron had been oxidised by the impact of years of rain and wind.

At night, we would sleep out in the open. I would often wake and find myself unable to go back to sleep, awed by the spectacle of a myriad stars spangled across the black vault of the heavens. I’ve never thought of myself as particularly religious, but it was impossible not to sense the presence of God in this incredible panorama—and the infinitely small nature of man. I had been moved that way on previous trips, but this time, the feeling was deeper, more spiritual, and I felt a greater sense of acceptance and calm. I felt privileged to be one of the very few fortunate enough to be in a place that was both mysterious and beautiful.

How to get there: Fly Thai Airways from Delhi via Bangkok to Kunming, the provincial capital of Yunnan. China Eastern airways takes you to the picturesque town of Lijiang. Take a chartered bus to Daju (about 75km), the put-in point on the Yangtze.

Adventure options: While rafting is no longer possible on this stretch, the area still offers some spectacular trekking options. The 16km-long Tiger Leaping gorge is one of the deepest in the world and you could base yourself at Sean’s Spring Lodge (‘www.tigerleapinggorge.com’). Rafting is still possible in the upper reaches of the Mekong and Salween rivers. Jim Norton and his colleagues (‘greatbend@gmail.com’) organize such trips and charge $2,500-3,000 (Rs1.07-1.28 lakh).

(The author is a former executive director of the Indian School of Business, Hyderabad, and is now an independent education consultant)