Through a long lens

Through a long lens

He still shoots mostly in black and white. For veteran photographer Ram Rahman, the monochromatic stylization of the real world still has that everlasting charm. And so do many of his more than 200 photographs, which will be on display in New Delhi during the coming week. From slice-of-life grabs from the Indian metros, to portraits of the rich and elusive, his work spans three decades in the timeline of a nation. Having shifted base to New Delhi a couple of years ago, he speaks to Lounge about his homecoming:

The exhibition showcases photographs taken over 30 years. Is it an attempt to sum up your work?

You can call it a mid-career retrospective. I haven’t done a show in New Delhi How is it that you haven’t returned to the city, which has been your favourite shooting ground, for so many years?

Yes, it is very much accepted as an art form though in terms of critical understanding of the medium, we have not gone far.

Why, among the portraits of commoners, do you profile the rich and famous?

Those are all people I know, people who have been with me during various stages of my life. Many of them were my friends or friends of my parents, people like artists M.F.Husain, Satish Gujral, F.N. Souza, dancer Balasaraswathy. I have not searched out these people, they are a part of my eventful life.

What is the story behind the portrait of artist Bhupen Khakhar with Gandhi’s statue?

We had done a symposium on Gandhi in 1995, and Khakhar, an old friend, was there with me. Both of us were amused by a huge bronze statue of Gandhi, which was ironical because the statue was, in many ways, against the principles he stood for. Khakhar had the sense of humour to go and sit in its lap, and I quickly took a shot.

Which photographers have influenced your craft?

Walker Evans, Brassaï and Manuel Alvarez Bravo. All of them are very different 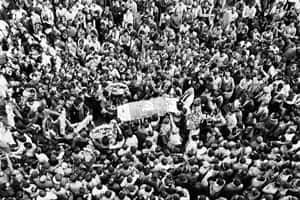 A hero gone: Capturing the funeral procession of Safdar Hashmi.

How do you categorize your work?

So where does it leave the principle of the photographer being a detached observer?

I don’t think there can be any such thing as a detached observer. By merely making a choice—in terms of the subject—about why you choose a certain scene over the other, you are informing the audience about the subject.

What kind of changes have you noticed in the sights you have been shooting in urban India?

There is a lot of change. To give a small example, in the earlier pictures I could see government officers and babus wearing certain kinds of jackets and suits which were handmade, but over the years they have become much smarter and slicker with sharp, ready-made suits.

Why are you preoccupied with shooting elements of urban Indian visual pop culture like graffiti, billboards and posters?

These objects used to be made by hand containing the sign of the painter, and made all kinds of comments about our society and politics. With the advent of digital technology, a lot of that richness has been lost. Nowadays, almost all of them look the same, and this saddens me.

Bioscope: Scenes From an Eventful Life will be shown at Rabindra Bhavan Gallery, New Delhi, from 2-16 February.