Treadmill: One step at a time

Treadmill: One step at a time

Although I have been working in the corporate world for the last 25 years and taking part in marathons for seven years now, the importance of setting a reachable, near-term goal never seemed clearer to me till I ran the San Francisco marathon in July this year.

The San Francisco route is too hilly for a city—it has probably the most ups and downs than any course I’ve run. I had not trained much at all, was jet-lagged, hadn’t slept well the week before and was not hydrated—having had wine and beer rather than water, as I worked through the nights with my team prior to the run. 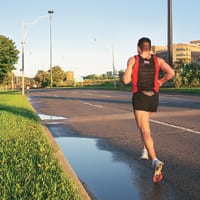 Basically, I did not have a specific goal. All I was looking at was to finish the run and, if possible, in five hours.

At 5.50am, when I started off, I felt good. Aided by the early morning mist and with runners from all over the world, I crossed the Golden Gate Bridge and the Golden Gate Park and clocked a little over two hours by the time I touched the halfway mark. I then set myself a goal to finish the run in less than four-and-a-half hours.

I kept at the target pace for the next 10 miles, through the steeps. I even avoided the temptation of the draught beer on offer at the water stop at mile 14. I confess I had chugged some the last time I ran this course, and finished just shy of five hours.

All was well until mile 24 when I had an awful pain in my left shin and had to stop running. It was so severe that even walking became painful. For a brief while, I even contemplated pulling out. But I hobbled along for a mile. Determined to continue the race, I reset my near-term goal to just finish the marathon, without being taken past the finishing line on a stretcher. Miraculously (perhaps it’s the hackneyed mind over matter thing), at mile 25, the pain disappeared and I started jogging again.

Soon, I realized that I was going to finish in more than four-and-a-half hours. So, I set myself a new target: Of beating 50 runners ahead of me, before I got to the finishing line at mile 26.2.

I increased my pace and started overtaking some marathoners and some half marathoners one by one… 15, 20, and then 37. I realized I was a bit tired to carry on for the remaining 900m at the same pace. I stopped and started walking—to catch my breath and get my pulse rate down. Soon, I resumed running and then broke into a sprint. I crossed the finish line having crossed 49 runners. And then the shin pain returned.

Near-term goals can make a lot of difference. Tough, but possible ones can help us focus on what can be achieved rather than wasting our time thinking about the obstacles. It’s the taste of success in the short-term goals that drives up the self-confidence and helps us set a medium-term or longer-term goal and gets us to work towards them. I am sure that had I not crossed 37 runners in the first bit of the last mile, I would not have felt confident enough to “rest" and then be able to cross 50 before the finish.

Set yourself a short-term running or a fitness goal.

2) For a fortnight, spend half an hour every day running or walking.

3) Increase your running pace by xx seconds a kilometre.

1) Feel fitter in a month: I feel fitter now than I did when I was a teenager.

3) Say goodbye to sinus-related problems in two weeks: I had to have my sinus cavities drained some years ago with surgery, but they started filling up again.

Since I started running, I have never even caught a cold, let alone suffered sinus-related problems.

So, as you can see, these are not fairy-tale, quick-fix solutions. They are real and they start with you.

If your goal seems too tough as you progress, re-adjust your short-term goal.

But what’s most important is that you should remain focused and you will win.

It’s always the first two weeks of anything that are the toughest. Once you cross that threshold, you will see the results for yourself.

And then, you can spread the word. It’s fun to be running and living.