Sushi bores and self-appointed Japanese food purists have expounded lengthy lists of to-dos and not-to-dos when eating Japanese food, creating an aura of pretentiousness and snobbery around its consumption. Then there’s the price tag, making Japanese food, at least in India, an elitist cuisine.

The express purpose of Joss’ Japanese tasting menu festival (on until 30 November; many of these dishes are available on the restaurant’s new menu) is to bring the cuisine to a wide audience and remove this “elite" tag. For first-timers, this is ideal since it does away with the bother of knowing how and what to order.

Joss’ tasting menu begins with a babycorn and asparagus salad with iceberg lettuce drowned in tomato dressing. Interesting, but not exciting. 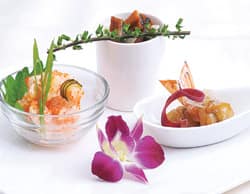 Joss’ tasting menu is not just for the non-vegetarians

Of course, we’ve been told that Japanese food is more than just sushi, but the truth is that the sushi here is, quite simply, a neat combination of art, origami and flavour. The sushi course begins with salmon cheese tamaki, crisp on the outside with a generous slice of salmon sitting on the rice inside, and ends with a small bowl of sushi-vinegared rice topped with glistening beads of salmon roe. Vegetarians get a pickled radish roll, one with fried sweet potato and mayonnaise, and a miso-flavoured grilled rice ball. Some simple advice: Don’t hesitate to pick up the sushi with your fingers and dip and eat it the way you want to.

Being closely associated with the vegetarian palate, I can bet the sansho-flavoured seaweed and vegetable soup is going to be hard for non-meat eaters to appreciate. While owner-chef Farrokh Khambata argues that vegetarians regularly consume his miso soup and will have no problem with this, I would say the broth was too strongly fishy, perhaps from seaweed being steeped in it too long, even for this self-confessed seafood lover. And, it would be great if the service staff knew a little more about what they were serving.

Joss’ tasting menu, ambience and service succeed in creating a snobbery-free Japanese eating experience, but the non-vegetarian tasting menu does cost Rs1,850 per head, and the vegetarian Rs1,100 per head (prices don’t include taxes or sake). While this may be about one-third less than a similar meal at other Japanese restaurants, it doesn’t do much to shed the elitist tag associated with Japanese cuisine.

It’s great to meet someone who obsesses about the acidity levels of Indian tomatoes (so much that he just imports canned Italian tomatoes), who can whip up a quick gorgonzola dressing without charging you the earth and who’s determined not to cater to local chilli powder-loving louts (although I must say that when I ordered the delicately-flavoured risotto, the waiter placed a bottle of Tabasco on my table). Owner Sanjay Kotian, who learned cooking on the job in New York, planned the place for more than a year before he finally launched this compact but warm Italian restaurant. Luckily, this neighbourhood gem is down the road from me at Bandra’s Pali Market. On two separate occasions, we tried the following outstanding dishes: Fish Ravioli (Rs225), Chargrilled Rawas with Black Olive Sauce (Rs250), Country-Style Peppers (Rs175), Assorted Lettuce with Gorgonzola Dressing (Rs125), Spinach and Goat Cheese Risotto (Rs275). Taxes extra. So what if the restaurant doesn’t have a wine licence or if their tiramisu (Rs95) tends to be runny? It’s several strides ahead of your regular Penne Arrabiata-serving Italian stand-alone.

After the MCD sealed Olive’s door last spring, a vacancy in New Delhi nightlife for a chic place to linger over Mediterranean food never quite got filled. Thankfully, A.D. Singh downsized his South Beach-meets-Capri style for a quiet spot in Chanakyapuri at the Hotel Diplomat. This spot follows the lead of Olive Beach in Bangalore with a chilled out lounge feel to it.

In the breezy space, distressed turquoise furniture adds a touch of bohemian funk to the modern white lines of the tables, couches and bar chairs. The appetizers were a bit underwhelming, but the entrees more than made up for it. Huge king scallops topped crisp potatoes and shredded carrot. The quattro modi di anatra, or duck in four preparations, had a sumptuous duck pudding. And we loved the rack of lamb with a cashew and pistachio crust and a hint of cinnamon. Lingering is advisable, since the best dessert on the menu, a warm chocolate lava cake surrounded with cinnamon-laced cream, takes 20 minutes to prepare.

The menu is a work in progress. They’re experimenting with new combinations, so a few misses are to be expected. The passatelli with sausage had too much seasoning by way of salt. We wondered if perhaps the chef had spilled the whole jar of olive brine into the sauce by accident.

The prices are on par with restaurants of its kind, with appetizers starting at Rs395, pizzas at Rs420 and entrees at Rs550, taxes extra.

In Mumbai, Olive’s new seasonal menu focuses on fresh seafood. The highlight is the Spanish Espatada, or skewers of meat and fish, cooked in a tabuna, or Bedouin oven (Rs275). Take your pick of goodies that include Mediterranean Seafood Mousse (Rs375) and Baby Lobster Gratin (Rs720). Taxes extra.

At Mumbai’s Le Royal Meridien in Sahar, this November, the answer to green or black is both. An olive promotion offers dishes such as Marinated Kalamata Olives in Herbs enveloped in Olive Oil (Rs220), Red Snapper Filet with Olive Ratatouille and Steamed Butter Potatoes (Rs530), Green Olive ice cream, or Ricotta cheese ice cream with candied black olives (both Rs210). Plus taxes. Then, get yourself an olive oil massage.

Master chefs at New Delhi’s Shangri-La will share their favourite lobster recipes at the hotel’s 19 Oriental Avenue through November. Savour specialities such as Isa Ebi Tempura, Lobster Sam Ros, Steamed Lobster with silver and golden garlic, and much more. Available for lunch and dinner, each dish is priced at Rs1,725, plus taxes.