Thanks for Visiting Mint
You seem to have an Ad Blocker on. Please turn it off in order to continue, or whitelist Mint
HOW TO TURN OFF AD BLOCKER
OR
REFRESH IF YOU ALREADY TURNED OFF THE AD BLOCKER
Home >Leisure >TV preview | World on its feet

TV preview | World on its feet

TV preview | World on its feet

If you’ve got used to the high drama and voting appeals that tug at the heart strings—staples of Indian dance shows such as Nach Baliye, Jhalak Dikhhla Jaa and Dance India Dance—then Star World’s latest American import, Superstars of Dance, is bound to disappoint at first. Things get better, though, as the show progresses. 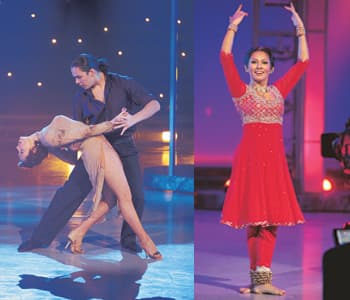 The right moves: Tango (left); and Kathak by Amrapali Ambegaokar

The concept is brilliant—but mostly on paper. For a show that calls itself the “biggest dance competition on the planet", the first dance performance from India in episode1 was, shockingly— though somewhat predictably—Bollywood. Two American women of Indian origin danced to the song Dola re from Devdas—supposedly the best that India has to offer. Which makes you wonder if the contestants from other countries are really showcasing their best either. Shveta Salve and Gauhar Khan, contestants of Jhalak Dikhhla Jaa, would have done a better job. The judges weren’t impressed either—the duo scored in the 6-7 range out of 10, the lowest of the day.

The same episode began with a superb group performance from Ireland. Clogging in perfect unison, the dancers gave the show the perfect start, getting the highest points of the day. The quality of dance doesn’t get much better, but the variety of styles showcased is mindboggling.

The American contestant performed Popping, a street dance that involves contracting and relaxing muscles to make jerky movements. The South Africa contingent showcased a traditional group dance performed by the Gumboot Dancers—a dance form that miners would entertain themselves with after work. There is no music, only tapping of boots, jangling of trash cans, chanting and clapping.

And what are the odds that the representative of the billion-plus republic of China in this competition would be called Bei Zheng? The small, smiling woman performed a beautiful solo ribbon dance, twirling a colourful fabric, which, nevertheless, seemed dull when compared with the Argentinian tango. You hold your breath as the couple navigate the stage with intricate footwork and graceful lifts. In addition, you’ll get to see some excellent jazz (Argentina), ballet and ballroom (Russia), tap dancing (Australia) and contemporary fusion dance forms.

But for a show that’s about showcasing cultural dance forms, you don’t find out much about the dancers, their dances or even about the judges (who is Shirish Dayal, the judge representing India? A Google search did not help, nor did the channel). The judges aren’t given an opportunity to comment or explain, which leaves you wondering why a ballroom cabaret with beautiful acrobatic lifts from a US dancer got 7 from the judge from Argentina, 9 from the Indian judge and 10 from the Irish one.

Nonetheless, we will tune in to Superstars of Dance for the sheer variety of dances. The next performance from India, after the abysmally poor Bollywood number, was by Amrapali Ambegaokar—actor (Grey’s Anatomy, ER and Heroes), Kathak dancer and daughter of Kathak guru Anjani Ambegaokar. The “bells on her feet" intrigued everyone, and at the end of a graceful performance, which concluded with a spin of 15 rounds that she took on her heels, the audience erupted and India went right up there on the scoreboard.

Superstars of Dance will premiere on Star World on Monday, 9pm.