Home / Mint-lounge / Features /  The migrant crisis
Back
Share Via

At first glance, Desmond Lazaro’s solo show, which began on 11 March at the Chemould Prescott Road gallery in Mumbai, is an exploration of portions of his family’s past. The works include a video interview with his mother, Joyce; a record of his great-grandfather’s baptism certificate dated 1855, discovered at a church in Madras (now Chennai); a painting of a ship that transported his mother’s and father’s families to England from Burma (now Myanmar) in the late 1950s and 1960s; and miniature-style paintings inspired by 8mm home videos of family holidays taken in the 1970s, and scenes from the artist’s childhood home.

Yet, as Puducherry-based Lazaro shows in The In-coming Passengers, personal memories offer another window into what we understand as history with a capital “H", one in which national boundaries are reshaped, oceans are divided, monitored and protected, wars are fought, and colonial empires are brought down.

This isn’t surprising coming from Lazaro, who trained as a miniature painter in Jaipur under Banu Ved Pal Sharma after graduating from the Maharaja Sayajirao University of Baroda. The details and the interior life are as important, if not more, than the larger events that make it into the history books. And for Lazaro, one of three children of first-generation migrants in England—both his parents came to live in Leeds in their youth—personal history is woven intricately into political history.

The story of emigration is not just one of families setting sail to another land. It is about creating an imaginary homeland and growing new roots, as his parents and grandparents had to do. They travelled on the SS Salween, which ferried several Anglo-Indian/Anglo-Burmese families through the Suez Canal (itself a colonial legacy that sought to reinforce European supremacy over the Mediterranean Sea) once socio-political compulsions made it difficult for them to survive in these lands. Most of Lazaro’s works in this show bear a significant cartographical symbol—the compass rose that shows which way is north.

“My question is, what north are they going to," he says.

In an introduction to Cini Film, a set of miniature paintings inspired by the home videos and photographs shot by his father in technicolor, Lazaro writes: “In some ways, this work is an attempt to retell the narrative, in first person, so to speak, to redress notions of what it means to be an immigrant and what immigration actually is. Perhaps it is not what we think, our notions are based on historical fact, but much like identity, this is largely constructed. For, if anything, history is glued together (...)"

This description could apply just as well to the rest of the show, especially Baptism Certificate, which bears Lazaro’s great-grandfather’s document.

The work uses gold-leaf and pigment paint with ink on handmade Sanganeer paper to render the record as authentically as possible, down to the cursive script that was employed by the original writer, a clerk at St Mary’s Church in Chennai, in 1855. Lazaro described finding this document as a “visceral experience"—after decades of feeling “homeless", the artist was finally able to set down some roots.

Yet, that’s not all that Lazaro seeks to present in this exhibition. Even as he explores his own and his family’s journey, he is keenly aware of the contemporary horrors of migration, as evidenced by the hundred of thousands of Syrians who have had to flee their country because of a civil war. He alludes to this in Crossing The Med, a 3x4ft painting that is a re-imagining of a work called Crossing The Ganga by 18th century miniature painter Manaku. 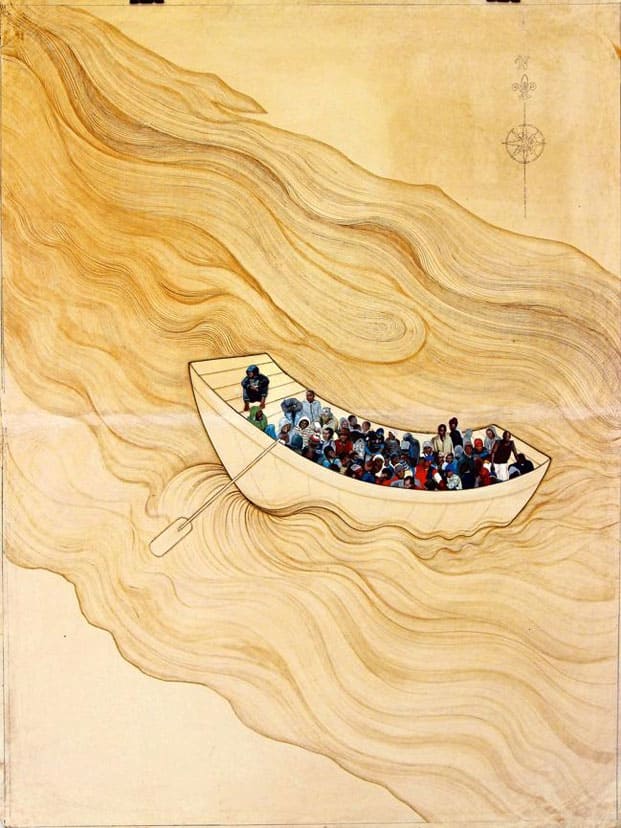 Migration is not just a tool that helps one prise open history, he seems to say. It’s a contemporary reality that one can no longer afford to look away from.