As the English Premier League transfers come to a close, here's a look at the new players clubs have invested in, and what it could mean in the long run

It doesn’t feel like there was a football off-season this year: After Leicester City’s Premier League heroics last season, Iceland and Wales created a similar underdog story at the Euro Cup 2016. At the end of the tournament, there was the familiar image of Cristiano Ronaldo lifting a trophy—just like he had, 44 days earlier, for Real Madrid in the Champions League.

Before one could breathe, the Jose Mourinho-to-Manchester United show had begun. Managers Antonio Conte and Pep Guardiola had already signed up for Chelsea and Manchester City, respectively, and Carlo Ancelotti was at Bayern Munich. Ronald Koeman was at Everton and the England national team decided to bring in Sam Allardyce.

Then the player transfer sagas began, dominated by Zlatan Ibrahimovic, Paul Pogba, Leroy Sané, Gonzalo Higuaín, Mario Götze, Sadio Mané and John Stones. All eyes were on the latest season of the Premier League, which started on 13 August, and was suddenly home to the best coaches and managers in Europe.

The first marker of success, however, is the players a club signs. So if the Premier League were to be decided on that alone, here’s how the top four clubs would look. The summer transfer window came to a close on 31 August (this article does not include the transfers made on the last day).

The results on the pitch may well be vastly different, but there’s no escaping the fact that the €4.89 billion ( ₹ 36,675 crore) that the Premier League clubs have spent so far adds to the drama in an already over-indulgent football show (see below “How some of the big European clubs spent their money this season." for other major leagues). 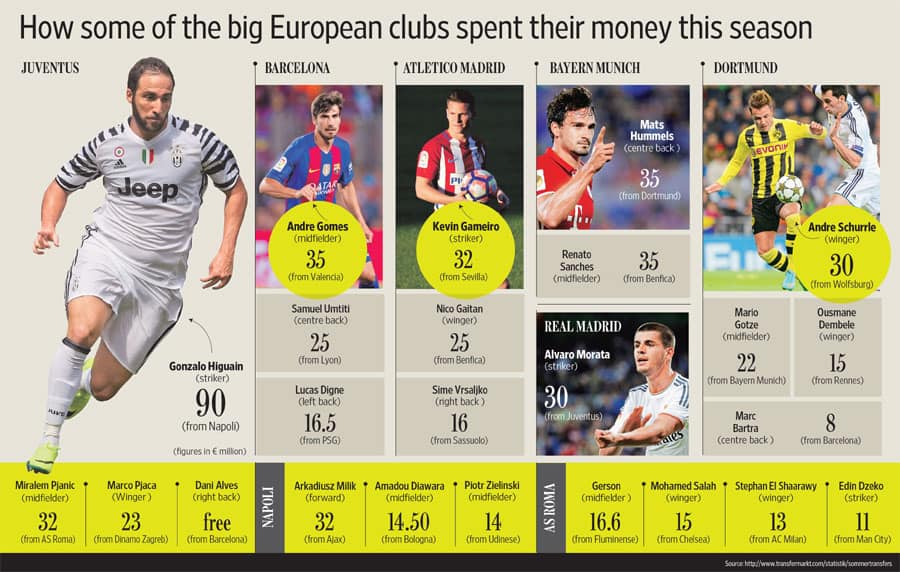 Paul Pogba from Juventus for €105 million, Henrikh Mkhitaryan from Dortmund for €42 million, Eric Bailly from Villareal for €38 million, and Zlatan Ibrahimovic on a free transfer from Paris Saint-Germain.

This was a no-brainer. Mourinho likes to make his signings early in the close season (June-August), and he got three of his four targets before anyone could blink: Bailly, who is a monster in defence, Mkhitaryan (23 goals, 32 assists in 2015-16) and Ibrahimovic were signed before Mourinho broke the transfer record for Pogba.

Ibrahimovic and Pogba need no introduction, and Mourinho has done well to ride the competition for their signings with his sheer ability to attract the top names. Real intent, and a menacing start to the season to go with it—Ibrahimovic has already scored thrice in three Premier League games, and Pogba’s drive from midfield is a joy to watch.

John Stones from Everton for €55.6 million, Leroy Sané from Schalke for €50 million, Gabriel Jesus from Palmeiras for €32 million, Ilkay Gundogan from Dortmund for €27 million, Claudio Bravo from Barcelona for €18 million, and Nolito from Celta Vigo for €18 million.

The margin of expense is close between the two Manchester teams. Guardiola brought in some incredible talent to City, with young Sané and the seasoned Gundogan from Germany—two players who can change a game with a moment of genius.

Stones is the ball-playing defender and Bravo, the passing goalkeeper, as Guardiola starts setting up a team that will eventually look to play tiki-taka (a style of play in football). Nolito, the late-blooming Spanish winger, is already a trusted lieutenant and responded to being left on the bench against Stoke City with a brace in 22 minutes. Brazilian Jesus, who won gold at the Rio Olympics, is a signing for the future and will join in January to aid striker Sergio Agüero up front. Guardiola’s team looks set—now it’s all about him finding the best tactics.

André Ayew from Swansea for €24.10 million, Manuel Lanzini from Al Jazira for €12 million, Arthur Masuaku from Olympiacos for €7.10 million, Edimilson Fernandes from Sion for €6.40 million, Simone Zaza from Juventus on loan, Jonathan Calleri from Maldonado on loan, Gökhan Töre from Besiktas on loan, and Sofiane Feghouli from Valencia on a free transfer.

Walking out to the new Olympic/London Stadium needs a newly minted team. West Ham have done incredibly well to keep Dimitri Payet till deadline day (at least) and buy some proper attacking talent.

Ayew, who scored 12 goals in 2015-16, is a beast up front, but has been out for most of the season with injuries. Manager Slaven Bilic immediately cushioned the loss by getting Zaza from Juventus. We are still to see how much of a bargain Feghouli is on a free transfer.

Expect the Hammers to finish in the top seven again as Bilic stamps his authority on a team that got relegated in 2011, fought back to the Premier League in 2012 and has since looked secure.

Granit Xhaka from Mönchengladbach for €45 million, Shkodran Mustafi from Valencia for €41 million, and Lucas Pérez from Deportivo for €20 million.

Pérez is hardly the striker Arsenal need to mount a title challenge, but that has been their story since Thierry Henry left—a hit and always a miss on the world’s best attackers. So, in that department, they can only hope the Spaniard replicates some of the form that got him 19 goals last season.

If not, then it looks likely that Alexis Sánchez will lead the line through the middle. Xhaka, however, is a fine deep-lying playmaker—he got 89% of his passes on target at Euro 2016 (four matches) and will add bite to a midfield full of attackers. Mustafi is a centre back who, if fit, can resolve Arsenal’s defensive crisis.

Arsène Wenger has got a team capable of...yet another top four finish.

Pulasta Dhar is an I-League commentator and news editor (sport) at Scoopwhoop.