The art of war

The art of war

A warm, dense air permeates T.V. Santhosh’s two-room studio in the Borivali East suburb of Mumbai. Cigarette smoke, dried oil paint and brewing tea—the smells overpower the cool breeze that occasionally wafts in from the grassy, swampy stretch of open land the windows overlook. An almost blank canvas, with faint traces of pencil lines on it, stands on an easel.

I wait for the artist in the studio on a weekend morning—around the time Santhosh was preparing for a solo show in London’s Grosvenor Gallery, which opened on Friday. He is known to be a slow worker, labouring over a work for months, painting one corner first and then filling up the rest of the canvas because, as he later tells me, his subjects demand the slick, single-layered, watercoloured effect which is time consuming. 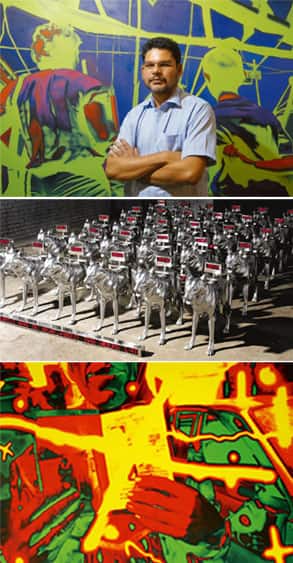 Soon after he arrives, Santhosh points out that this is not the best time to photograph him with his works. “There’s nothing here now; I’ve been working on this one for some time now," he says in his muffled tone. “Because sometimes I feel as if the painting is already there. I have to slowly peel the white skin off the canvas to get to it."

This startling observation is a great conversation starter.

His voice is barely audible, but Santhosh ranks as one of India’s most eloquent artists, driven by political rather than more immediate human concerns. He doesn’t share in this assessment, though. “It is not a political, but a philosophical approach," he says about his art. Terrorism, war, military intervention, injustice—in the decade or more that Santhosh has been painting, he has passionately involved himself with the larger world and with events that grab the media’s attention. In fact, most of his imagery is sourced from the media: photographs of captured terrorists, the spectacle of war and bomb blasts, uniformed securitymen with sniffer dogs on leash.

For the Grosvenor show, Living With a Wound, Santhosh appears more involved with the rhetoric of terrorism and militarism than he has ever been before. “My recent works are just a continuation of what I have been doing, nothing drastically different. But I see that after the terror attacks in Mumbai, the context of my works has become more relevant," he says.

In Your Terrorist, Our Freedom Fighter, he paints the same man twice, side by side, his face covered by a cloth and hands above the head, surrendering to his captors. The two figures receive different treatment—one has deep hues of green and red; the other is lost, almost distorted, in a mix of neon green and pink. The work questions the ambiguities inherent in notions of right and wrong, enemy and victim, evil and innocent, ambiguities that the media tends to paper over. Irony is integral to Santhosh’s dialectic. “It is the only way to deal with the unresolved nature of the happenings around the world today," he says.

A Santhosh canvas is easily distinguishable. Most of them look like photographic negatives where specific details of a face or an object have been largely erased. What remains is the basic structure or outline—reminiscent of the works of famous American painter-photographer Man Ray. As the details get deleted, the event’s hidden implications surface; the local loses its specificity, making way for the universal to come to the fore.

This thematic quality struck Conor Macklin, director, Grosvenor Gallery, as unique in Santhosh’s work. “If he wanted, he could churn out hundreds of the same kind of works and they would sell, but they would be gimmicky. The political and social undertones makes those like me, who like a bit more substance to their pictures, happy," Macklin says in an email.

Among the works on display at Grosvenor is a scaled-down version of one of Santhosh’s largest works: a mixed media installation called Counting Down which was completed in early 2008. It has 30 steel and fibreglass dogs placed neatly in five rows. Numerals scroll through an electronic time band affixed to each dog. The associations, Santhosh says, range from dogs used as suicide bombers in Nazi Germany to the ubiquitous sniffer dogs at airports and hotels.

There is also, as in all his works, a larger, apocalyptic significance. The original work is part of the Frank Cohen Collection in the UK. “The political references in some recent art from India are not always immediately apparent to audiences in the UK. However, in Counting Down, the subject matter transcends national politics and addresses issues that are universal and we are all familiar with," says David Thorp, curator of Initial Access, Frank Cohen’s Gallery, in an email.

Santhosh’s political (philosophical) leanings took shape in the early 1980s in Trichur, Kerala, with Pratikarana Sangam, an activist group. “It was after Chernobyl happened and then the Bhopal gas tragedy struck in India. We painted posters protesting these events and depicting the side effects of so-called progress and pasted them all over Kerala," he says. Later, he studied sculpture at Santiniketan, West Bengal, and then went on to do a master’s in fine art at Maharaja Sayajirao University of Baroda.

Since his debut solo show in 1997 in Vadodara, Santhosh’s work has been exhibited in London, New York, Lisbon, Mumbai and New Delhi. In September, When Your Target Cries for Mercy fetched $701,500 (around Rs3.43 crore now) at Saffronart’s auction of contemporary Indian art, and in December, his painting Two Wise Men and their Sheep fetched $86,123 at Christie’s Asian Contemporary Sale in Hong Kong.

Living With a Wound is on at Grosvenor Gallery, London, till 27 February.