A dull book with vapid language and predictable plot twists, which will nonetheless be a bestseller

Ashwin Sanghi’s The Sialkot Saga says on the cover that the author has sold a million copies of his books. Yes, and McDonald’s sells the most food in the world.

This is pertinent because like Salman Khan’s movies, nothing that I say will deter fans of Sanghi’s, and he will continue to laugh all the way to his public sector bank. I once saw a TV talk show where an audience member was asked his movie preferences, and the college-goer (who you’d think would be in the prime of his inquiring life) said that he wanted to watch predictable, formulaic films “for time-pass", where no intellectual energy was spent. Fair enough. But me, I prefer Shah Rukh Khan taking a risk with Fan anyday to watching brain-tenderising tripe like Chennai Express.

This is not to denigrate the role of the book in an individual’s life. Not everyone should even try to read Immanuel Kant’s Critique of Pure Reason, one of the most sublime experiences I’ve had. And not everyone will find to their taste either Jeet Thayil’s Narcopolis or Jerry Pinto’s Em And The Big Hoom, two of the best Indian fiction in the recent past. If you like reading rom-coms or crime-fiction (I’m a “yuge" fan) or lad-lit then fine; at least you’re reading.

Unless, of course, you’re reading The Sialkot Saga, which actually has little to do with Sialkot other than that’s the provenance of the chain of events that comprise this flabby story. It is a dull book that could easily have been titled The Marwari Masturbator and remained a relevant signifier. But there are people who will still buy this book, despite its vapid language, its stock characters, its predictable plot twists, and its virgin-fantasy sex scenes. In the first third of the book each chapter ends with a joke or pun that has the freshness of a Facebook meme from 2009 (e.g., on page 485, “silent and listen were simply anagrams of one another"). If you get excited by the way the Marwari main character (or his Muslim doppelganger) cheat the world through shell-companies and forward-trading—even if you’re not a Mint columnist—then you may find this mildly orgasmic. For the rest of us, it is just the Chinese Water Torture. 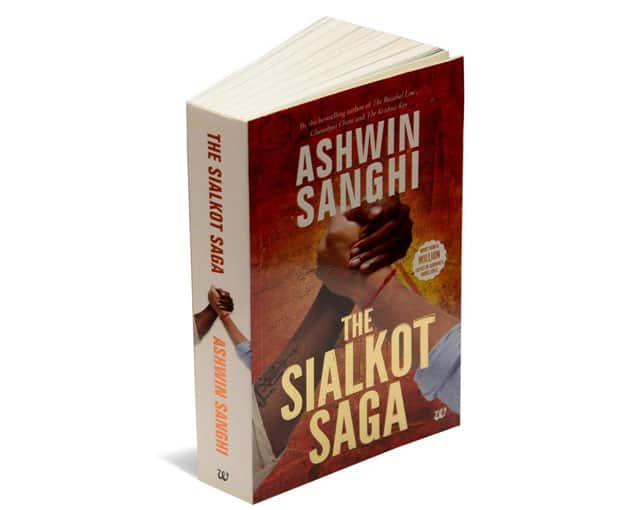 I’ve more or less told you the story: Kolkata businessman Arvind Bagadia and Mumbai gangster-turned politician Arbaaz Sheikh try to cheat each other until the end, when they die in the 26/11 attack. Oh, did I give away the ending? Sorry, belated spoiler alert. These cardboard cut-outs are only outdone by plot clichés, which weave landmarks in Indian history with the characters’ histories—in a most Wikipedia-ish way. Nothing is fleshed out, except the financial transactions. In between, there is a lot of cut-and-paste from our Vedic texts, to give the appearance of profundity; as if our scriptures foreshadowed our modern problems.

On top of which the editing is non-existent. For example, on page 342, Abhilasha is mistakenly written as Paromita. And some facts have been incorrectly copied from the internet: on page 469, the prime minister’s office is mentioned as opposite Rashtrapati Bhawan (correct) on Race Course Road (wrong!). And to say there was a communal riot in Kashmir in 1989 either betrays tremendous ignorance of events or is a deliberate attempt to impose a certain type of historical narrative. And then there’s plain sloppiness: on page 508, the Sport Minister appointed by Prime Minister Manmohan Singh (in 2004) is advised by his bureaucrats to arm-twist the BCCI by threatening to bring it under the RTI. The RTI Act, however, came into being in October 2005.

But the worst comes on page 377-378, in a sex scene that sounds like porn written by a schoolboy (“Arvind was on top and rode her like an animal, pounding her tirelessly"). To quote directly: “He tried counting how many he had had. There had been the model from Bombay, the writer from Calcutta, the shady lady from Ahmedabad, the singer from Lucknow, the painter from Pakistan and the dancer from Kerala...". Basically Sanghi is saying that if you don’t fit any of these stereotypes, you’re not a WOMAN. And mixing stereotypes—like a singer from Kerala or a writer from Bombay—doesn’t count.

The book is a frustrating waste of time. I had high hopes, because I for one was deeply excited by the boom in commercial fiction and the possibilities it opened for writers of all genres all over India. Now I worry about what it means for those literary writers (and readers) who aim for what in Indian aesthetic is known as “rasa". In a sense, the author is a bigger con-man than either of his protagonists, and the suckers are you and I, duped into buying this excuse of a novel.