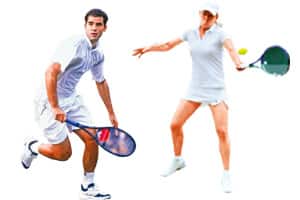 • Wimbledon began in 1877 but the first women’s competition took place only in 1884. It had 13 entries and the final was between two sisters, Maud and Lilian Watson. Maud won and repeated the feat in 1885.

• Fred Perry was the last British player to win the men’s singles title at Wimbledon, in 1936.

• The first television coverage of a Wimbledon match was of one between Bunny Austin and George Rogers on 21 June 1937.

• Tim Henman became the first player to be disqualified from Wimbledon—for hitting a ballgirl in anger after missing a point, in 1995.