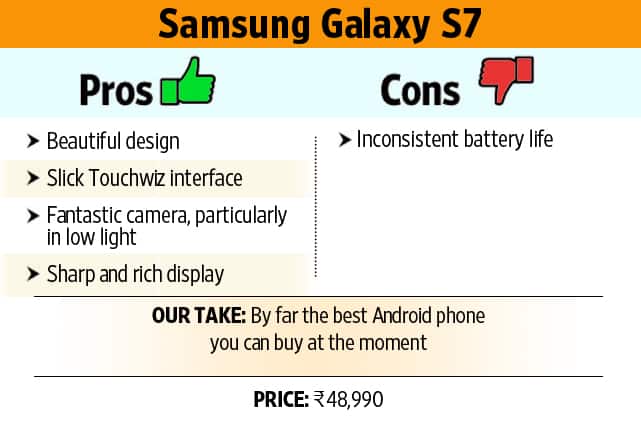 The curves on either side of the back panel allow the phone to fit perfectly in the hand. The display glass and the metal in the sides blend well, giving it a classy look. The compact footprint will appeal to users who don’t like big phones. It tips the scales at 152g, which is comparatively featherweight compared to the big-screen phones available in the market today. The phone might catch some smudges on the front and back, but never any scratches—the Gorilla Glass layer prevents it from getting scratched by the coins, pens and keys in your bag or trouser pocket. There is an element of ruggedness too, because the Galaxy S7 has the IP68 water- and dust-resistance certification.

The 5.1-inch Super AMOLED display has a resolution of 2,560x1,440. The screen ticks all the boxes—brightness, colour richness, sharpness, even visibility in sunlight, despite some reflections. Overbearing red colours, a problem with AMOLED displays in a lot of smartphones, aren’t an issue with the Galaxy S7, because Samsung has slightly tweaked the colour balance.

The new addition is the “Always-on" feature, which can be configured to keep certain parts of the display lit up to show information such as date and time. This doesn’t eat up a lot of battery, and can be a useful feature for users who tend to switch on the screen frequently to look at the time or check for new messages. The Galaxy S6 had by far the best smartphone screen last year, and the Galaxy S7 builds on that.

The biggest change on the software front is the completely redone Touchwiz interface, to go with the Android 6.0.1 (Marshmallow) software. There are hardly any pre-installed third-party apps, which is a good thing. The graphics look better, the swipe motion is smoother, and the phone is less resource-hungry than earlier, which means better performance and lower battery consumption.

The Galaxy S7 variant being sold in India has 32 GB internal storage, with a microSD card slot that can support memory cards of up to 200 GB capacity. This variant is powered by the Exynos 8890 Octa processor, paired with 4 GB RAM. This is one of the most powerful smartphone chips out there, and it isn’t a surprise that the performance is top-notch. Occasionally, however, the back panel does heat up a tad more than usual while using the Chrome Web browser or the camera, but it doesn’t do so at other times—this indicates a software configuration issue which can be resolved through a simple update.

The 3,000 mAh battery is, surprisingly, a bit inconsistent. There were times it lasted a day with ease, and even stretched till noon the next day. At other times, with largely the same usage, the battery would be down to just 15% by 8pm the same day. This niggle can be linked to the way a particular piece of software manages processor clocking, and can be ironed out by software or individual app updates. Even in the worst-case scenario, you will easily get through a day with ease—that is quite good, considering the powerful specifications and the high-resolution display.

The 12-megapixel camera is perhaps the single biggest improvement over its predecessor—the performance is indeed miles ahead of its rivals. Not only do the daytime shots look beautiful, but the low-light photos are much richer, well-detailed and reproduce colours better than the camera in the iPhone 6s Plus, which was the best so far. Each pixel in the new sensor is almost 56% larger than the Galaxy S6’s camera, and can capture around 90% more light.

While flagship Android smartphones perform most tasks quite well, they aren’t always perfect. But the Samsung Galaxy S7 changes that, for it doesn’t seem to put a foot wrong. Performance, design, display and camera are top-notch, and rivals arriving in the next few months will find it tough to match up.

Even though we are just three months into 2016, the Galaxy S7 could very well remain the top flagship smartphone of the year.