When Bapu kicked the ball

When Bapu kicked the ball

Mahatma Gandhi’s philosophy of austerity, social justice and abstinence may be anathema to today’s post-liberalized generation of Indians and its ideologues. He would have surely disapproved of the crass materialism of the Indian Premier League.

When he was young, Gandhi was not impervious to the romance of cricket. He played the game at the Rajkumar College in Rajkot, also the alma mater of his contemporary, Ranjitsinhji of Nawanagar. There are a few anecdotes about Gandhi and cricket, and the one most remembered is his disapproval of the communally oriented Quadrangular/ Pentangular cricket tournament in Mumbai during the freedom struggle in the 1930s and 1940s because of its divisive agenda. But according to existing knowledge, he was not directly involved in the game.

Unknown to most Indians, Gandhi was a huge football aficionado and his involvement with the game was long and passionate. He never became a professional or became famous as a player, but he preferred football to cricket. 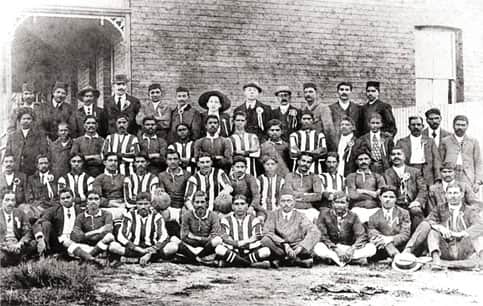 Ahead of the game: The ‘passive resisters’ in South Africa, 1913. Mahatma Gandhi is standing sixth from left in the back row, with his secretary Sonia Schlesin. Photo: Dinodia

Sometime during his two-decade stay in South Africa (1893-1915), Gandhi started two football clubs, in Johannesburg and Pretoria (Tshwane), both named the Passive Resisters after the political philosophy, inspired by the writings of Henry Thoreau and Leo Tolstoy, that he adopted to fight racial discrimination and injustice in South Africa.

It was a first of a kind—using sports for achieving political objectives. The apartheid regime later used sports to further its own ends. 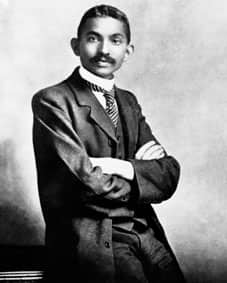 But for a schoolboy who, by his own admission, “never took part in any exercise, cricket or football, before they were made compulsory", it is significant that Gandhi chose football over cricket (then an elitist game) to reach out to the Indian community, which is celebrating the 150th anniversary of its migration to South Africa this year.

Football was an integral part of the lives of the Indian diaspora (mainly labourers and petty traders) in South Africa and there were flourishing Indian provincial football leagues such as the Transvaal Indian Football Association and the Klip River District Indian Football Association (both in Gauteng). It was, therefore, natural that football stadiums were popular venues for Gandhi’s political rallies where he and his associates (such as L.W. Ritch) often turned up for his club games and spoke to players at half-time or after the match on the imperatives of non-violent politics and issues about racial discrimination.

The great man fully supported his countrymen’s indulgence in sport, given its inherent quality to promote moral values such as team spirit and fair play. “Competition between passive resisters does not exhaust them," he once said; on the contrary, it ennobles them (incidentally, Swami Vivekananda was another football fan. He believed that playing football for one hour every day is better than meditation!).

After Gandhi left South Africa for India, the clubs’ activities declined and finally folded up in 1936. Gandhi did not abandon his links with football and gave his blessings to the first football team from South Africa, mainly comprising people of Indian origin, called Christopher’s Contingent (whose sponsor, Albert Christopher, collaborated with Gandhi in a 1913 labour strike), which toured India from November 1921 to March 1922.

Gandhi’s close associate, the Anglican missionary and ardent votary of Indian independence, Charles Freer Andrews, helped stitch the tour together. The team played 14 matches in Mumbai, Delhi, Chennai and Kolkata and Gandhi even spent time with the squad during their stopover in Ahmedabad. (Gandhi’s grandson Gopalkrishna Gandhi seems to have inherited his grandfather’s love for football; as the erstwhile governor of West Bengal, he was seen at many a football function and even became chief patron of the Indian Football Association during his stint in Kolkata.)

“Gandhiji’s involvement in football was a great thing to happen," Poobalan Govindasamy, president of the South African Indoor Football Association, said over the phone from Pietermaritzburg. “What makes it significant is that he had his heart in the right place and his mind in the right direction."

Due to changed political equations, Indians in South African football have now been confined to their own community, unlike in cricket where some of them are at the forefront. But their contribution to the game and the liberation struggle against apartheid in sport as part of the broader political movement, has been immense.

Indians in the South African Indian Football Association (founded in 1903) played a major role in the formation of the multiracial South African Soccer Federation (SASF) and the anti-racist professional South African Soccer League to counter the activities and agenda of the whites-only Football Association of South Africa (founded in 1892). In 1952, A.I. Kajee, an eminent Indian businessman and Natal Indian Congress politician from Durban, donated a £500 (around Rs35,000 now) trophy to SASF for a biennial competition between African, coloured and Indian “national" teams. The first Kajee Cup was a huge success and drew large mixed crowds for the matches in Johannesburg, Durban and Cape Town.

In the 1950s, the fight for Fifa (Fédération Internationale de Football Association) recognition for SASF was led by George Singh, an “Indian" lawyer from Durban, albeit unsuccessfully, till the united South African Football Association, or Safa (1991), gained recognition after the dismantling of apartheid. An associate of Nelson Mandela and a prominent anti-apartheid activist, Singh represented the South African Indian national team and even formed his own amateur soccer club, Stellar FC. For his “excellent contribution" to soccer and to non-racism, non-sexism and justice in sport and society, Singh was posthumously awarded The Order of Ikhamanga in silver.

Many prominent soccer clubs in South Africa, such as Moonlighters FC and Manning Rangers of Durban, were of Indian stock. G.R. Naidoo founded Manning Rangers, which went on to become champion of the inaugural Premier Soccer League in 1997. He was also its goalkeeper and chief sponsor. The club folded up in 2006 but a year later it was revived as the Fidentia Rangers.

Unfortunately, football is no longer popular among the South African Indian community. “It’s still important for us," says Govindasamy, who is on three Safa committees, “but we don’t have too many youngsters playing the sport."

Mario Rodrigues is editor, All Sports, a sports magazine. An edited version of this article appears in the June 2010 football special issue of All Sports.