48. Find your way back home

48. Find your way back home

Of the many vices I can own up to, I’m not given to “doing acid". Yet, millions of stars are floating below me; transient, almost hallucinatory, evidence of the millions above. The stars are being carried up-and-down up-and-down by waves, their sparkly brightness melting into the frothy phosphorescence of the sea. As the ship ploughed through the waves and the dark night, a million more stars got born and lost below me.

The two-day ship journey from Port Blair in the Andaman islands to Campbell Bay in the Nicobar group of islands was an indulgence of the self, without the trappings of luxury the word has come to be associated with. As the final destination of a two-month stay in India’s southernmost cluster of islands, Campbell Bay on Great Nicobar Island seemed perfect—the last Indian island before the waters take you to Sumatra in Indonesia and the farthest one can travel by ship in India. In a map of the Indian subcontinent, Great Nicobar is the final dot.

What is it I had left behind on shore? 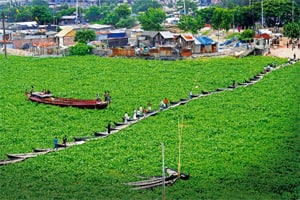 It required a careful reorchestration of life and style: prioritizing necessities over wants, putting a premium on reuse and regeneration of objects amid the increasing use-and-throw culture of Indian society, finding value in a single rupee coin and making it stretch, opting for a brisk walk over a short drive—revisiting, basically, some of the lessons taught in childhood.

Viewed from this side, it can be as simple as going back to the rum days.

Four years later, I was determinedly on my own, having lived through a job with the Indian edition of an American magazine where, even before you could utter Lehman Brothers, we were seeing salary cuts. India, nevertheless, was growing at a robust 8%, even as much of the advertising in the magazine came from brands based in America but making aggressive forays into the Indian market. When America was seeing bailouts and our magazine was feeling the squeeze, I wasn’t even the owner of a credit card.

It was necessary to disentangle from the cross-currents of the global market slipstream, where an individual is no more than flotsam and jetsam getting tossed around in churning waters. I quit and unceremoniously filed for penury a little after Lehman Brothers filed for global headline-grabbing bankruptcy.

Simple economics demanded that I not just return home, but also, metaphorically speaking, stay there.

Homecoming can mean different things to different people. It might just be about watering the potted plants on the terrace, stopping for a long-pending chat with a neighbour, or lifting a stray puppy by the neck and keeping it off the busy breakneck roads. Homecoming can be a scream against the chopping of the giant neighbourhood mango tree and the entire biosystem it nourished for years, or plucking out, one by one, vinyl advertisement boards nailed to tree trunks. An artwork by Paula Sengupta, a Kolkata-based artist who has been exploring her family’s roots in Bangladesh. Courtesy Gallery Espace.

Homecoming can be in standing at the water’s edge on Great Nicobar Island, looking out at the dramatic turquoise of the ocean. It is when realization strikes that the same water which carries such sheer beauty now had brought with it unforgiving death and An artwork by Paula Sengupta, a Kolkata-based artist who has been exploring her family’s roots in Bangladesh.destruction a few years ago with the Indian Ocean tsunami of 2004. And also that from here, there is nowhere else to go save home.

Earlier this year, in the village of my maternal grandmother in Bangladesh’s riverine Barisal district, I shared the darkness with her, felt at home.

Well over half a century after my late grandmother quit her village, never to return, I had somehow managed to trace the route back to her home—the root, really. As it was during her time, electricity is yet to arrive there, though nature is abundant. The opaque darkness, the ceaseless buzz of crickets, the rustle in the bamboo forest, the erratic hoot of the owl, and the glow of fireflies belonged to her as much as it belonged to me.

Behind me, inside the house of my grandmother’s neighbour, the two children in the neighbour’s family completed their homework around a kerosene lamp. Lives yet untouched by television, or even a radio. After being introduced for the first time, the elderly patriarch of the family had forbidden us to leave without spending a night at their single-room home. The septuagenarian had laid out two plates full of mangoes and guavas plucked from their garden, gone out to buy chicken from the bazaar (reached after crossing a slippery bamboo-held bridge across a monsoon-fed rivulet), and for the fish, his son, who runs a small stationery shop, had flung the net in their bountiful family pond.

The next morning, he had extracted from an iron chest a letter dated and signed by my grandmother’s father, Nilratan Chatterjee, its yellowed edges an indication of the letter’s century-old vintage. The family tearfully waved us goodbye, but not before bestowing gifts upon us, a white hand-spun kurta for me.

I wanted to preserve the kurta forever, but couldn’t. I have worn—and shown it off—with juvenile pride. In it, again, I felt strangely at home.

Facebook has helped us get back in touch with long-lost playmates and that college romance that ended with the final exams. You could trade those quick “remember the time..." chats online and take the effort to go out and meet these friends you’ve recently rediscovered. That friend you went to preschool with runs a resort in his native village in Kerala, your best friend from primary school is a mother of three in Lucknow, and your partner from kick-boxing classes is a mountaineering instructor in Leh. Choose three friends you’ve lost touch with and make that your next travel project. If you haven’t been to that part of the country before, do some research and make arrangements to travel around as well. Discover a new place, and rekindle an old connection.

Yoga guru B.K.S. Iyengar once famously said: “When you hold breath, you hold the soul". The purpose of all of yoga—pranayam, asanas, suppleness of mind and limb—is to allow man, whether an ascetic or an ordinary householder, to gain awareness of his breath. In September, the World Health Organization (WHO) reported that with rapid industrialization, India is one of the worst-affected by air pollution, and an epicentre for lung diseases. Our age is one of short, sharp, half-lung breaths. No wonder, we are so angry all the time. Breathing is the metronome to your day. To control breath is to control life itself. To realign life, begin with one, full, deep, clear inhalation. Breathe, now.