Malaysian-born and Delhi-bred Kula Naidu mixed up the food of the three cultures in Malaysia — south Indian, Cantonese and Malay — to create a “tri-fusion" style. And, thanks to the south Indian influence, it’s a cuisine many Indians fall for after just a few meals. But with no Malay restaurants in Delhi, Naidu plans to open a restaurant next year in the city. For now, he’s launched a delivery service (which operates out of Saket) called Kayalan. We ordered lunch at the office. 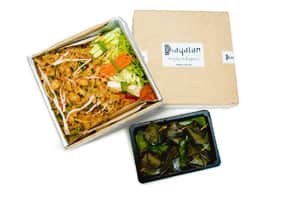 The entrees come either with mixed rice or fresh vegetables. Ramesh Pathania / Mint

After lunch, I called up Naidu, the owner, to ask him a couple questions. My colleague, well versed in Malay food, wanted to know why some of the most popular dishes, such as roti canai, were left off the menu. Naidu says they’ll be updating the menu in a month’s time, adding items and updating explanatory notes. His aim is to introduce Delhiites to Malaysian cuisine, so he may add suggestions on how to eat certain items, since a delivery service limits guests from asking questions about the food they’ve ordered.

This may have been the best ordering experience I’ve had in Delhi, and I’m including five-star restaurants here. The man who answered the phone was well informed, made suggestions about what to order, and gave apt descriptions about what type of food I should expect. I asked if he was the owner. No! Just an employee. He was the most educated food server I’ve come across in my two years in Delhi.

The food arrived in a heat-sealed bag, in beautiful wooden boxes, labelled neatly and insulated with aluminium foil to keep it warm.

Once I figured out you took off the exterior leaf of the Pandan chicken (It looked like a grape leaf to me!), the bite-sized juicy morsels were delicious, with just a hint of chilli. I couldn’t find any prawns in my Char Kway Teow, but the chicken and blue crab meat over tasty egg noodles was fantastic.

It seemed so decadent to be munching on crab meat in my cubicle. Sambal chicken (cubes of chicken in red pepper tomato mix, seasoned with Malaysian spices) was not too spicy and had a distinct flavour similar to Thai red curry. The entrees come with side dishes, be it mixed rice or fresh vegetables. That was a definite bonus, as were the portion sizes which were generous enough to share with a colleague.

Plus, there is a great ease to the ordering: you can call, fax, or e-mail the company. And their menu says that they accept cheque payment.

The food arrived 45 minutes after the promised 1 hour wait time. The delivery boy claimed traffic jams, and it could just be the stumblings of a new company, but it was definitely not a polished delivery service.

We definitely weren’t the only ones. A colleague tried the service the night before and the food took an hour-and-a-half to reach her.

Also, if you’re a vegetarian, the choices are limited. There’s pumpkin, eggplant, a curry, noodles and rice. The eggplant was nice, but if you’re a fussy vegetarian who would rather not experiment with pumpkin Malaysian style, you’re pretty much stuck with one vegetable.

Appetizers start at around Rs200; entrees at Rs320. It wouldn’t fit into my lunch price bracket, but it’s not too hefty a price for a nice dinner. Minus the late arrival time, it was a fantastic meal.