Home >Mint-lounge >Features >In an enchanted land | Solvang, US

In an enchanted land | Solvang, US

As we searched for a parking spot down the busy street, a pony trotted by, pulling a carriage that Cinderella would have been proud of. Its velvet pull-down roof and gleaming silver sides made me suddenly aware of how prosaic our rental car seemed in comparison.

I was in the fairy-tale town of Solvang, California, and the dreamy outlines of its architecture were visible the moment we approached it from Los Angeles. A white windmill, the size of a three-storey building, loomed over the windshield. Beyond it, a row of gabled houses painted in whites and browns clustered around a clock tower with a red-brick facade. This wasn’t going to be the average American town with neon signboards and fast-food chains dotting the highways that I had seen during my time in the country.

The streets look straight out of a fairy tale. Photo: Thinkstock

In Solvang, as we drove around looking for a parking spot, we passed shop displays bedecked with vintage dresses, antique chandeliers, art depicting fairies, pixies and creatures from Hans Christian Andersen’s stories, and timber-lined facades of houses.

On the street, I saw a bonnet tied with ribbons. I stood for a minute in the middle of the street, wondering if some enchantment had planted me squarely in the middle of one of the fairy tales I had been reminiscing about, only to realize that the person I was seeing was a town guide. These volunteers, dressed in frock coats and top hats, stand at street corners to answer the questions of the one million travellers like us who visit every year.

A restaurant on a horse-drawn carriage. Photo: WikimediaCommons

Inside, the musty smell of old books surrounded us. We spent an hour or so browsing through handwritten letters and reading placards with interesting snippets about his life. Did you know that Andersen was considered quite unattractive for his time, and that this is believed to have been the inspiration for his story, The Ugly Duckling. We perused yellowing manuscripts filled with his scribbles, feeling honoured to be in the presence of such personal memories of his life.

After we reluctantly left the museum behind, we decided to browse through antique shops. And soon found ourselves in a wonderland of teak dressers, lace-edged day beds and writing tables, all out of my favourite childhood storybooks. The window of Solvang Antiques, my favourite shop in the city, revealed a four-poster bed with satin curtains, with a China plate filled with bonbons by its side, labelled “Visions of sugar plums". This was a scene straight out of ’Twas the Night Before Christmas. Before I knew it, I was inside the shop, standing in front of the bed, itching to climb in like a little princess and nibble on a bonbon. 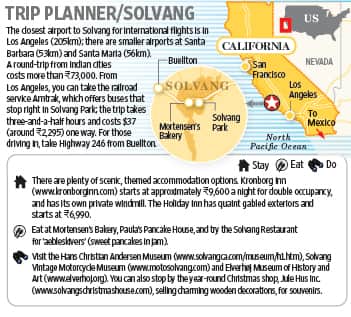 I walked about, gazing in delight at delicate tree ornaments made from porcelain and hand-blown glass baubles. I examined curiosities from long- forgotten times, and tried on old-fashioned lace collars and brooches. I wouldn’t be buying any of these, but a kind old shopkeeper still indulged my wide-eyed fancy by showing me around.

By the time we left in the evening, in search of our next campsite, I was deeply in love with Solvang and its fairy-tale décor, white windmills and sugar-scented air. Stuck in time, Solvang reflected the wistfulness of early Danish settlers who came here but couldn’t really leave their world behind.

As we planned to drive out, I couldn't leave this world behind either.