The Kayasthas are not a geographically or linguistically defined community, but a sub-caste traditionally associated with the administrative professions and spread across the country.

Historically, these men of letters served as ministers, treasurers and accountants in the royal courts of medieval India. “It is not one cuisine, but rather a sophisticated version of that regional cuisine. So in Bengal, it would be dominated by rich fish curries, while in Punjab and Delhi, it would be koftas and pulaos. In Maharashtra and further south, the coastal Kayastha communities have a wide selection of seafood dishes," says Preeta Mathur, whose book Courtly Cuisine: Kayasth Food through the Ages is due to be published by Roli Books in October. In north and central India, it was the proximity of the Muslim rulers that informed their culinary habits. It was considered a mark of refinement to eat goat and lamb meat, she says. 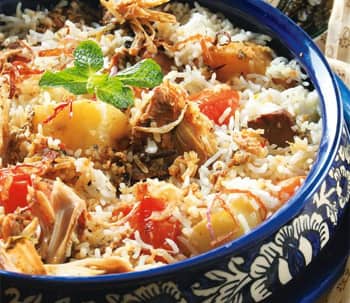 The heavy use of spices is a hallmark of the cuisine. Black cardamom, with its sweet, heady aroma, is a must in meat-based dishes. “Badi elaichi not just made them taste good, but smell great. A typically Kayastha cooking tradition inherited from the Muslims is yakhni, which means meat stock," says Vishal.

400g basmati rice, soaked in water for half an hour and drained

A pinch of saffron, soaked in 2 tbsp warm milk

Parboil the rice with black cardamoms, cloves, cinnamon and salt. Drain the water and spread on a tray to cool. Remove the spices. Heat ghee in a pan and fry the onions till golden. Keep 2 tbsp aside and grind the rest into a paste. Fry the jackfruit till golden and keep aside. Fry the potatoes. In a big bowl, mix ginger, garlic, green chilli, green coriander, mint leaves, garam masala, fried onion paste and yogurt. Pour over the fried jackfruit and let it sit for 15 minutes.

Heat ghee in a heavy-bottom pot on a low flame. Stir in the salt, coriander powder and red chilli powder. Add the jackfruit and stir. Layer the potatoes and tomatoes over the jackfruit. Finally, cover with the rice. Pour the apricot pulp and lemon juice over the rice and sprinkle the saffron milk.

For the dhungar: In a small metal bowl, take smouldering charcoal pieces, blow off the ash and place a clove on them. Pour 1 tsp ghee on the charcoal and as it sizzles and smokes, quickly put it on the rice and cover the pot with a lid. Let the smoke infuse the dish for about 5 minutes. Remove the bowl and pour the remaining ghee on the rice. Seal the lid with dough and dum-cook. After 15 minutes, turn off the heat and let it rest for 10 minutes. Serve hot, garnished with fried onions.