“I’ve always been an entrepreneur," says G.S. Bhalla, 37. After graduating from Delhi University, Bhalla opted to forego studying at a business school and set up his own business venture in 1994. He started institutional business-to-business sales for promotional material for organizations such as Tata Donnelley, CRY and WWF, and had some success with a corporate gifting company. In 2000, he saw the success of BPO companies and decided to look for “the wide space" in the market where no one else was doing business. He found his spot with knowledge process outsourcing (KPO), providing back-end service to healthcare companies in the US. 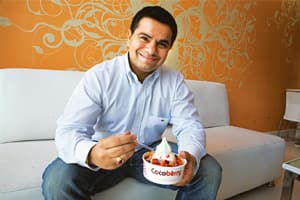 Travelling around the world for his KPO job, he sampled frozen yogurt in Korea (“where the fro-yo craze started") and Pinkberry, a popular frozen yogurt in Los Angeles, US (“Our name", he says about Cocoberry, “is not meant as a reflection of Pinkberry"). When he started looking for a way to enter the fast moving food-and-beverage industry, he thought about young, urban customers looking for a health-conscious alternative. Given the oppressive heat of Indian summers, he realized this cold treat could be the perfect business option.

The first store, in New Delhi’s Defence Colony market, was launched in November, just as the financial market crumbled. “The turnout was rather poor and I thought, crap, this thing is not going to work," he says. The rest of the week, too, was rocky. In fact, it took a whole month for the store to get a steady stream of customers, but there has been no looking back since.

From May to August, Cocoberry has opened stores in Hyderabad, Mumbai and three more Delhi locations. By the end of the year, they are hoping to have 15 more outlets across India. Now that the idea is cemented in an enterprise, Bhalla is looking at various modes of expansion, including the franchisee model. He plans to have 500 outlets by 2013.

Bhalla has other ideas up his sleeve as well. He hopes to use Cocoberry as an example of running a business with a minimal carbon footprint. He’s teamed up with The Climate Group, an NGO in Delhi, to steer his business in the green direction. The stores use recycled materials for as many products as they can, from napkins to stationery. Customers who bring in their own cups get a Rs5 discount. Eventually, proceeds from the company will help Bhalla and his wife, Manisha, open a school for underprivileged girls.

“Don’t get into a business if you can’t do it differently."