Skunkworks in a Batcave

Welcome to the Batcave. This is an enclosed cabin that appears to be encased in concrete. A trio of miniature cricket bats, each signed and framed, hang on the outer wall of the room, next to a sign saying “Batcave". Inside, the warm glow of yellow light reveals a compact room, filled with personalized memorabilia and wooden furniture.

Located in an ageing bungalow in Mumbai’s western suburb of Juhu, the Batcave is part caricature, part tongue-in-cheek creativity. Its occupant? Ashish Hemrajani, a chief executive officer (CEO) who wears a baseball cap and jeans to work, and has music playing in the background, even during our conversation.

The Batcave could be the office of a millennial-founded start-up, but a poster of Roger Waters, the frontman of iconic rock band Pink Floyd, suggests it’s not. Placed on a wall beside the desk, the signed and framed image points to a seasoned music love.

This is the office of 43-year-old Hemrajani, CEO and co-founder of Bigtree Entertainment, whose flagship product is the online ticket sales platform BookMyShow. 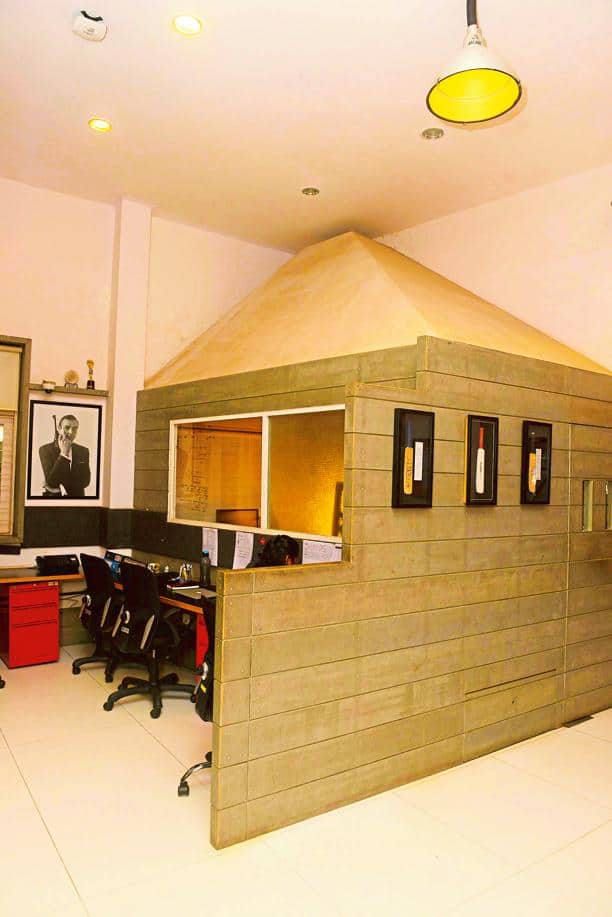 “It’s called Batcave because it looks like a bat cave from the outside. Each room is branded, we have a ‘Shoebox’ and a ‘Garage’. (The office décor) was done by our in-house teams, they just had fun. And the bats are gifts…. I have tons of memorabilia, we’ve put it up in all BookMyShow offices. The latest is in my car, it’s the ticket from (Sachin) Tendulkar’s last game, he signed it," Hemrajani explains.

The three-storey bungalow, complete with a patio, is an odd choice for the corporate office of a company that graduated from the start-up space a long time ago. Bigtree Entertainment has been in the business for 18 years and employs 1,400 people, mostly in Mumbai, but also in cities such as Bengaluru.

But, for Hemrajani, the bungalow holds both emotional and practical value.

“This is Bigtree’s registered office address, it has been our starting point in this avatar and it’s something that you know we’ve continued to retain. This space is like a skunkworks project—it’s an incubation office. Jukebox, BookMyShow’s digital audio entertainment service, was incubated from here before they moved out. It is also a sanctuary for those from any other office who need a quiet place to work for some time. And the landlords are great, they don’t want us to move out. It’s very relaxing, we see no reason to move out. You can’t find bungalows in Bombay any more," Hemrajani says.

The bungalow is not the only anomaly in Bigtree’s real estate portfolio. The company has as many as five offices in Mumbai, all distributed within 1km of each other, in the Andheri/Juhu neighbourhoods.

At a time when most companies are consolidating their facilities into fewer, but bigger, workspaces, to enable employees to collaborate better, this disaggregated model reflects an incremental approach to growth, scale and space. “Real estate in Bombay is very expensive, and we didn’t know the depth of how we are going to scale. We scaled slowly, every time we needed more office space, we got more office space," explains Hemrajani.

His caution is informed by his early years as an entrepreneur, when he was forced to downsize workspace and headcount, in 2001. “We started in 1999. Then the dotcom bust happened, and the carpet was taken away from under our feet and we moved to a tiny one-bedroom apartment in Bandra. We went from 150 people down to six," he recalls.

The need to maintain an entrepreneurial environment is the other reason to keep spaces compact and energetic, Hemrajani says. “When we started growing, the mentality of that same skunkworks, or that incubator, continued to be ingrained in our philosophy. Maybe we didn’t want to grow up…. We are attracting young creative talent; if you don’t have great places to work, they cannot build great products. And so each of our spaces is unique and different," he points out.

Productivity losses through disjointed workspaces are offset by keeping the different offices connected—virtually, through technological tools, and physically, through a shuttle service which runs to and from Andheri station in the mornings and evenings to help employees commute, and shuttles between all five locations for the rest of the day.

Teams are also connected through shared management practices, which is vital, he acknowledges. “We were getting very disconnected at one point of time. But, two years ago, we picked up Agile and Scrum principles and now every office is connected," he says, referring to Scrum.org, a certification and training programme to promote agility in software delivery. Product teams come together at the beginning and end of every week, to jointly outline and reflect on the week’s goals and challenges.

Hemrajani’s approach, of aligning his business model and his business hubs, reinforces two of my core beliefs—one macro, at the city level, and the other one more micro, at a personal level. First, it clearly underlines an important aspect of entrepreneurship: Cities need spaces for creative start-ups to flourish. The Bigtree model of incremental, almost boutique-like expansion can only take place because of the availability of compact floor plates in the neighbourhood, whether bungalows or new commercial buildings.

Hemrajani’s workspace is also a personal statement, reflecting his zen-like outlook to life. “Because you are a journalist, I wore jeans, otherwise I am in shorts. It is the space that we are in. There is no disconnect with what we are trying to project, and who we are. If you are true to yourself, then everything falls into place," he says.

Forget the saying, “You are what you eat." In this case, you build what you value most, a space that allows you to be yourself.

With a name like Batcave, it is tempting to liken the room’s occupant to Batman, the vigilante caped crusader of the eponymous fictional series. Ashish Hemrajani prefers a different analogy, launching into a soliloquy on entrepreneurship.

“We (BookMyShow) are entrepreneurial mongrels. You get out there every day. If somebody pets you, become their friend, if somebody gives you food, take it with graciousness. If there is a fight with a pack of dogs, you can’t fight to live another day, run, get the hell out of there, come back, there will always be another day to fight. Find a nice spot to sleep; if you have to run after a car, run. Every day you wake up, there is a wild street out there and you got to survive. So my theory as an entrepreneur is that if you don’t have that sort of mindset, then just don’t do it. It’s not meant for you."

This theory of adapt-or-die reflects in his views on competition too. “When we founded BookMyShow in 1999, we had 19 competitors. In 2002, all of them died, except for two whom we bought. When we resurrected the brand in 2007, we were among 21 competitors. A few of them died in the global financial crisis, and we bought one or two. Then, again, in 2016 the economy picked up and more competitors came...this osmosis will continue. You have to focus on the quality of your product," he says.

Their next step: to focus on content creation to fill in existing gaps.

On success: Success has many parameters, and many fathers. All of this is temporary, it ebbs and flows, the stock market goes up and down, valuations go up and down.

On funding and valuation: More companies die of indigestion than starvation. So don’t go over-capitalize yourself. And stop praying to the unicorn. It’s a mythical animal, it’s ugly and it does not exist. So if people ask you who you are, you should say you are a cockroach because you can survive in a microwave oven, and in a nuclear holocaust.

On teamwork: We don’t run a cricket team, where a Virat Kohli or an individual scorer or a Shikhar Dhawan gets you across the line. We are running a soccer team.

Aparna Piramal Raje meets heads of organizations every month to investigate the connections between their workspace design and working styles. She is the author of Working Out Of The Box: 40 Stories Of Leading CEOs, a compilation of Head Office columns published as part of the Mint Business Series.