Imagine if someone tried to sell you a computer that came with no bundled software and no storage space. No Word, Excel, Photoshop or whatever else you use on your computer, and no hard drive to store all your gigabytes of files either. You’ll probably think they are taking you for a fool, trying to sell you a lemon. Yet this is precisely what Google is about to do—create an operating system in place of Windows or Mac that doesn’t require any software and eliminates the need for storage. 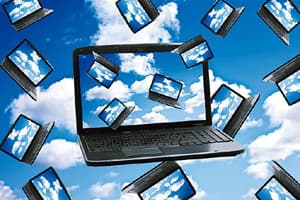 Connect to the cloud: Store everything online and access it from anywhere.

Computers have traditionally been all about power—how much can it do and how fast can it do it. But the increasing popularity of ultralight netbooks and touch-screen tablets is an indication that people are beginning to see Web browsing as the main point of a computer.

But they still come with a fair share of headache. Things need updates, there can be conflicts between different programs, you have to figure out where to put all your stuff, and your hard disk may crash at any time. Although software is becoming smarter and easier to use, ideally, computer users should not have to deal with all of this. It’s like how Gmail or Hotmail simplified life: You no longer have to run your own mail program on your desktop. You don’t care where your data is stored so long as you can access it from anywhere.

Google is taking this evolution of the PC one step further by launching an operating system (OS) that is essentially a glorified Web browser. This goes against the usual way in which we have used our computers—you go to the store, pick up the latest software on DVD, and install it on your machine. In the Google Chrome operating system, you won’t store any programs or files on your computer—everything you need will be stored online. Of course, all of this means that you must have a very fast and reliable Internet connection.

The computer will then become a device to connect to the “cloud"—the term that is being used for our new online life. If your computer is lost or damaged, you don’t lose any work—just log in from somewhere else.

Already, you can use your Web browser to edit pictures with Photoshop, collaborate on a Word document or on Google Docs, or keep track of your workouts using RunKeeper. Companies have been using the cloud for some time now. Imagine you are an animator working on a new short film. Until recently, you would need to spend on an expensive server that could give you the effects that you need. These days, companies such as Amazon rent out their high-powered servers to you—the infrastructure is already in place. By leasing out computing power on demand, you get the same performance and at a fraction of the cost, and without the IT nightmares that would typically go with it.

But cloud computing is not just about cost or ease of use. It’s also about going social. By making it increasingly easy to share ideas and collaborate, media-sharing websites such as Flickr, YouTube, Vimeo and, of course, Facebook, have driven an explosion in creative talent. There has also been a surge in terms of access to knowledge—by building a transparent, self-correcting, collaborative encyclopaedia on the cloud, Wikipedia has harnessed the intellect of thousands of keen amateurs and experts. In doing so, they have far exceeded the breadth and depth of any paper encyclopaedia. The next big step is to drive this collaborative intellectual power in the direction of creating new ideas and doing research. It has the potential to change the pace of science.

For personal computing, it means zero software and zero storage. You have a gadget and you work on the Web. Of course, there will be a monthly subscription.

Shekhar Bhatia is a former editor, Hindustan Times , a science buff and a geek at heart.