Giving children a lesson in adventure, history and wildlife

My husband and I are no Tony and Maureen Wheeler, of Lonely Planet fame, who travelled to Nepal in 1981 with their baby girl, Tashi. But we do like to inspire wanderlust in our eight-year-old twin boys whenever we can.

For their first-ever trip to the sea, we ditched the oft-visited places and chose Kashid, a small town on the Konkan coast, its long shores washed by the Arabian Sea. Despite being jostled from their slumber to catch a glimpse of the vast sprawl of water, their excitement mounted fast, and didn’t subside through the weekend. The dull drubbing of waves and salty breeze greeted us as we neared the shoreline. The beach, fringed with tall coconut trees, was just the welcome we needed after the drive from Pune.

The beach town has something for everyone—solitude, history, nature and adventure sports. After settling in at our home-stay, we set out to explore Murud-Janjira, considered one of the strongest marine forts built in the history of India. Situated on an island off the coast of Maharashtra, it stands almost intact despite the waves that have lashed against it for over 400 years. The only way to reach the fort is via a boat that plies from the Rajapuri jetty at regular intervals. And as we neared the fort, the choppy waters left the twins more delighted than nervous.

Carefully camouflaged, the entry point to the fort is visible only as the boat nears, approximately 40ft away. It was once known to house over 500 cannons; today three gigantic ones live to tell the tales of battles fought here.

It was the Abyssinian minister to the sultan of Ahmednagar, Malik Ambar, who built the fort to protect the region from enemies at sea. Its interiors host the remnants of a glorious past: a mosque in ruins, legendary secret passages under the sea, the queen’s chamber, a crumbling palace, and a deep well that is still a source of fresh water. Though the history lesson was lost on the boys, the cannons did command their attention.

Since the aim was to savour new things, we chose Konkani cuisine for dinner. A meal of coconut-infused curry, stir-fried okra, snake gourd and rice was met with enthusiasm—something I never could have imagined in the city. It was remarkable to see the children enjoy the unusual flavours. I, for one, was particularly pleased by this by-product of travel.

The next day was reserved for the Phansad Wildlife Sanctuary, one of the less-explored parks, 35km from Kashid. Once part of the hunting reserves of the princely state of Murud-Janjira, it was converted into a sanctuary in 1986 to preserve the coastal woodland ecosystem. The 6km trek takes you through a serene landscape, the silence interrupted by the occasional chatter of birds. We were surprised at the way the children trundled along uncomplainingly, curiously absorbing each leaf and insect on the trail. Since we had opted for the Rs1,000 package that allows you to explore at your own pace, we were in no hurry either.

Our date with history and wildlife came to an end late afternoon. The boys settled in for the ride home, exchanging notes. Watching their enthusiasm, I promised myself that we would follow the Wheelers’ example as much as we could. Even if it’s just weekend breaks.

Route: Take State Highway 104 after taking the Bengaluru-Mumbai Highway out of the city. Take National Highway 166A to Sahan. Head south for 25km till you reach Kashid.

Top tip: You can try activities like parasailing, banana-boat rides and jet skiing, organized on the Kashid beach by independent operators. 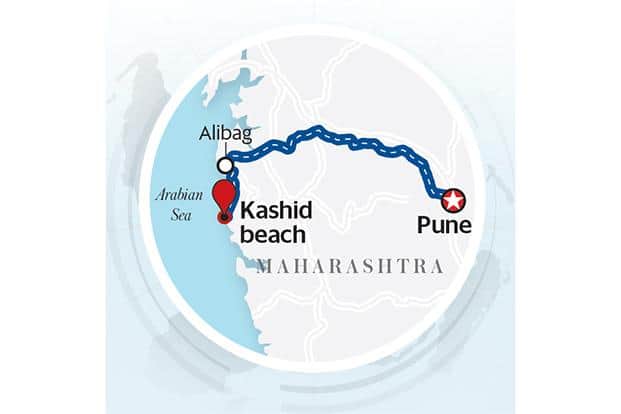