Home >Mint-lounge >Where the books have no name

Where the books have no name

Where the books have no name

A handwoven ball of thread stands on a pedestal, in a transparent case. In it, on a brass plaque, is written: “1:14.9 1188.5 miles of Fenced border—West, North-West Data Update: Dec 31, 2007". It is so ridiculous a figure, it could be random. The ratio is in fact the proportion of the ball of thread to the 1,188.5km of fencing on the India-Pakistan border. The figure is as specified by the Union home ministry, says artist Shilpa Gupta. “Can you imagine fencing a border?" she asks.

To underline the futility, next to it is a video of a hand pulling an endless string of thread from the earth. How do you fence the world? How do you draw the line? Defining that line—whether of the self, the state, or the shrine—is Gupta’s preoccupation at the ongoing exhibit, Someone Else, at the Chemould Prescott Road gallery, Mumbai. 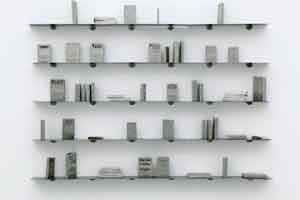 Off the shelf: Steel books in Someone Else.

Her personal favourite is the quirky Japanese novelist known as Banana, who liked the fruit, and Emma Blair, who is in fact an Irish male writer of romances. “There are many reasons why you would try to be someone you are, in fact, not—some are intensely personal, and others, political," Gupta says.

Showing in Mumbai after four years, Gupta has expanded her preoccupation with borders, both notionally and spatially: “I am often asking the same question. Earlier, in 1999, it was with my project with Menstrual Blood; at some point in Blame, where it was about perception. How do you define the other? Growing up in cosmopolitan Bombay and seeing it turn into Mumbai, you wonder whether it is home, street, nation or shrine—how are you defining the lines?"

All her themes come together in Speaking Wall, a new installation, which is a distance sensor. The viewer wears headphones and faces the LCD screens on a wall. The wall triggers audio comments: “Step away one step" or “come forward", it says, and brings you to a particular position, and speaks to you. The poetry is Gupta’s own. It asks: “Are you not able to see the border? Maybe the wind shifted the border. The rain shifted the border by a few centimetres and I am no longer able to enter my house."

It follows a loose process that reflects Gupta’s own openness to interpretation. There is always the risk the listener won’t comply. “My process is fragile," she explains. What does it take for an artist to relinquish control over what her viewer takes away? “I think of it as creating pathways to the viewer. The viewer may choose to walk along the path. I would like for the viewer to absorb it and then leave it open-ended. It is almost not possible for anything to have identical meaning. I would not ask for it. But what is possible is some amount of overlap in emotion."

Someone Else opens today at Chemould Prescott Road, Fort, Mumbai, and will show till 16 February.