Begum Akhtar is a classic example of how personal tragedy is often that differentiating edge between a great performer and a truly exceptional one. As Rita Ganguly, a student and companion of the only musician who had permission to smoke on the premises of All India Radio’s recording studios back in the golden era, puts it in her book Ae Mohabbat…Reminiscing Begum Akhtar, her taseer(soulful sound) was the result of years of “loneliness, pain, suppression and silence". Ganguly says it also ensured that Akhtar was a master of what Brecht called the alienation effect; she had the ability to sing the saddest song with a bright smile. 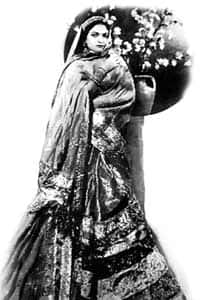 The book, co-authored by publisher Jyoti Sabharwal, is a gripping portrait of the tormented soul who came home and cried after every big performance. It’s the journey from Bibbi to Akhtari Sayyed to Akhtari Bai Faizabadi to Begum Ishtiaq Ahmed Abassi and, finally, to the name we all recognize, Begum Akhtar.

In childhood itself Akhtar faced more blows than most of us do in a lifetime. Her father Asghar Hussain, a young lawyer who fell in love with her mother Mushtari and made her his second wife, subsequently disowned her and his twin daughters Zohra and Bibbi (Akhtar). All her life Akhtar pined for the father who never acknowledged her existence. At the age of four, the sisters ate poisoned sweets and were rushed to hospital. Zohra died on the way and Bibbi, who was her sister’s constant companion, couldn’t understand where she had disappeared. When she asked her mother, Mushtari said her sister had gone to Allah’s house; that was the little girl’s introduction to religion.

Like many female singers of the time, she tackled her share of abuse. Her first teacher, a just retired, respected name in Hindustani classical music, once lifted her dress and slipped his hand over her thigh, supposedly to illustrate a musical point. Ganguly says all the 200 professional singers she spoke to in her research for the book complained about the physical abuse they had faced from their teachers.

Worse, Bibbi, or Akhtari Bai Faizabadi as she was by then known, was raped by a raja of one of the states of Bihar who was a patron of classical music. She gave birth to a girl, Shamima. Mushtari, determined that her daughter would not face the world as an unwed mother, pretended the baby was her own and Shamima became Akhtar’s sister. The singer stood by this story until her death. 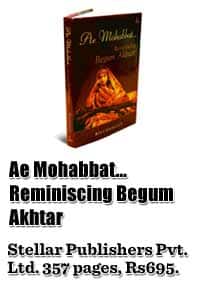 And that’s only her life until the age of 13.

In the preface to the book, Ganguly quotes a psychiatrist who says the early trauma of Begum Akhtar’s life resulted in the singer being consumed by melancholy. She always felt a deep vacuum in her life and lived in constant fear of “Ya Allah, ab kya hoga?" (Oh god, what next?).

In addition to the story of a gutsy woman who always battled the stereotypes that surrounded professional female singers in those days, the book is littered with juicy nuggets. There are tales of Akhtar’s favourite composer Madan Mohan’s gori girlfriends and how he used to get drunk and tell her he was a complete misfit in Bombay; why she refused the role of Balraj Sahni’s mother in Garam Hawa; of being wooed by the Nizam of Hyderabad’s son, the Nawab of Rampur (and many other members of royalty); and of how she had seven abortions and became a cocaine addict. There’s even an anecdote about bumping into Raj Kapoor in Kamathipura, Mumbai’s famous red-light district. And surely the story of the time when Akhtar consumed 50 bottles of beer and had a heart attack the next day is slightly exaggerated?

More importantly, the book captures the zeitgeist of the 1930s, 1940s and 1950s. The Old Coffee House in Lucknow where Jawaharlal Nehru and Maulana Abul Kalam Azad argued; the politics of All India Radio and how professional singing women were kept off the air; Lucknow’s Taksal mohalla where all the professional singers lived; and commercial theatre in the time of Agha Hashra Kashmiri, the Shakespeare of Urdu. 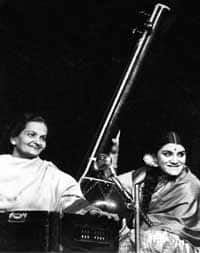 There are all the firsts — the first time Akhtar finally saw her father at a posh wedding; her first hit; and her first big compliments (Sarojini Naidu told her she was brilliant; the legendary Gauhar Jaan predicted she would be a great ghazal singer).

But in the second half of the book, before you realize it, Ganguly’s life takes centre stage and for long passages, Akhtar becomes the accompanist. It’s almost like the author’s retelling of a Srinagar concert when Akhtar presented Ganguly on stage and sat slightly behind her — she got the announcer to say that Ganguly was being accompanied by Begum Akhtar on harmonium.

There’s also a rather technical chapter on the mathematics of Akhtar’s singing and lots of other nuts and bolts recollections such as the traditional rivalry between the Kirana gharana and the Patiala gharana and how performing arts were handed down. Plus, the language is often grammatically incorrect.

But then most things are imperfect including, as Ganguly points out, Begum Akhtar’s voice. “Her forte was not necessarily the audibility of her music, for she had a defective area where her voice cracked at a high-pitch, with a limited one-octave range, but she turned it into her virtue for she knew how to mould her voice," says Ganguly of her last guru.

Why wait 34 years after Akhtar’s death to write this book? Ganguly says it took her all these years to muster the courage to share Ammi’s story, not just as a student but as a woman who has seen another woman’s life from such close quarters. Besides, gold-standard taseer never goes out of style.