Home >Mint-lounge >Features >Why Xbox Music got rebranded as Groove

Why Xbox Music got rebranded as Groove

Not just music, but Xbox video has been repackaged too. The reasonuser disconnect

Microsoft continues with its rebranding and recycling mission as it gears up for the launch of the Windows10 operating system later this month. The Music app and streaming service will now be called Groove. At the same time, the Xbox Video service will now simply be called Movies & TV.

Microsoft’s Joe Belfiore published a post on Twitter on 7 July to suggest that the reason for both branding changes was user disconnect—for example, people who don’t own Xbox gaming consoles (Xbox 360 and Xbox One), don’t really understand Xbox-branded apps on their computer and phones. 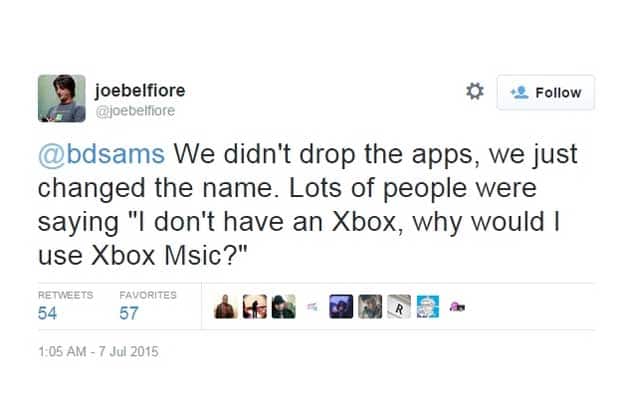 The Groove app, as we see today, started as Zune Music. At that time, Microsoft was also selling the Zune media player, and hoped to rival the success Apple had with the iPod and iTunes service. When Windows 8 and Windows Phone were launched, the service was renamed Xbox Music. It was further rebranded as just Music, with some elements of the old Xbox Music branding still showing up in certain features within the app (for example, the Xbox Music Pass branding remained as is).

Perhaps, what is most interesting is that Microsoft is re-using the name Groove after many years. It had purchased the Groove collaboration software suite in 2005 from Groove Networks, founded by Ray Ozzie. Microsoft later integrated features from that acquisition into the Office suite.

Groove, as a basic free service, retains the same set of features as earlier. But the one big change is that Microsoft is now trying to make this more attractive to users who have a big library of music sitting on their computer. Groove will support the ability to upload music files to Microsoft’s OneDrive cloud storage and access these songs on any Windows computer, tablet or phone, as well as the Xbox gaming consoles, and Android devices or iPhones.

Things can be a bit confusing though because Microsoft also offers a streaming service called Groove Music Pass. This streaming service allows access to 40 million music tracks and costs $9.99 (around ₹ 630) a month (or $99 a year). Existing Xbox Music Pass subscribers do not have to make any changes to their subscription. The service will continue as is, because the charges remain the same.

However, this service from Microsoft has competition from the likes of Spotify ($9.99 a month) and Apple Music (both of which are available on Windows PCs) globally. In India, the comparatively low cost of subscription for Apple Music ( ₹ 120 per month for single account; ₹ 190 per month for six users in a Family pack) can prove enticing enough for Windows users to download iTunes.

Microsoft says users will also be able to access their music quicker than before and the mouse/keyboard controls and the touch gestures for touch-screen devices have been refined. The Groove app will also be customizable. Users can pick between light or dark themes and change the app’s accent colours. Users can drag-and-drop songs into playlists, and a “Right" click will bring up the menu that allows users to pin an album to the start menu. The Windows 10 roll-out is scheduled to start on 29 July, and will be available as a free upgrade for existing genuine Windows users on desktops, laptops, tablets and hybrids.