What would happen if players across all generations could play against each other in that one Championships? We find out

At 2pm, on the second Sunday, the sun is singing, the ivy is manicured more sharply than Ms Sharapova and the grass is greasier than Big Bill Tilden’s brylcreemed hair. Rufus the hawk, hired to disperse loitering pigeons, glides above a court where Roger Federer has swooped all fortnight.

Tilden—who won his last Wimbledon at 37 in 1930—was an actor who rumouredly appeared in Shakespearean plays. Federer is simply appalled that Shakespeare did not hang around to write one on him. At the perfect Wimbledon, they must play in one semi-final.

At the perfect Wimbledon, the dress code will be white trousers and the nattiest headband will be a silk one knotted around the spirited head of the leaping Suzanne Lenglen (six Wimbledon titles around the 1920s). The Frenchwoman, who occasionally required tots of brandy at changeovers, is the soul sister of Tilden, who once said: “The player owes the gallery as much as an actor owes the audience." In a modern age of endless scrutiny and relentless commerce, athletes tend to forget this minor detail.

Even at the perfect Wimbledon, there will be rain interruptions, but Lucknow boy Cliff Richards will be forcibly restrained should he feel compelled to start crooning Summer Holiday as he once did. Similarly, if Vijay Amritraj gushes “Oooh I say" on commentary again, he will be escorted from the grounds. Meanwhile, like a more manly past, there will be no chairs at changeovers. Athletes stand or they fall.

Grunters will be allowed, else we would have to ban Jimmy Connors, twice champion, and what is a hallowed Wimbledon without that crotch-holding %$#@ *&^%$. Connors is a mix of Uri Geller (he can bend spoons with a sneer) and Nostradamus (he can predict a serve before it has left a rival’s racquet). Fittingly he will play Goran Ivaniševic, who served a record 212 aces in 2001, in the third round. Yes, there will be some swearing here. Connors barely wins because Ivaniševic, like one year in Brighton, has to default because he breaks so many racquets he runs out of them.

At the perfect Wimbledon, the balls will be white so that Fred Perry, England’s last champion from 1936, can use his trick of following an approach shot to the net by running directly behind the ball. In his view, the white ball, against the background of his white shirt, was harder to spot. Whether it helped the world table tennis champion in his four-set, fourth-round victory over Rafael Nadal was not revealed. 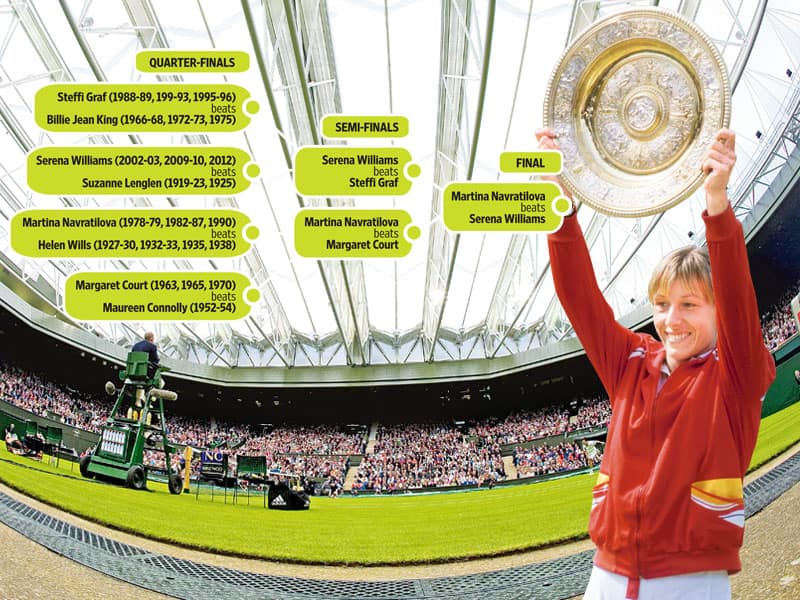 In 2012, attendance was 484,805; 142,000 portions of strawberries were consumed, the tournament had 965,000 Facebook likes and 25,000 Championships’ towels were sold. At the perfect Wimbledon, all these figures will be bettered because the field of players is irresistible. An American writer once wisely postulated that sport is at its best when it is played moving forward. Defence is integral to sports’ theatre for stopping genius from advancing its own art. But charging forward, to the net for instance, speaks of boldness, recklessness, creativity, risk, valour. Sometimes, like the Light Brigade, this charge forward will be futile, but always brave.

Spectators will require little changing for the English at Wimbledon, more than anywhere, understand the virtue of silence of sport. They are there to watch sport, not to be a part of it. Yet they are confused, for what does one watch? On Court One, Miloslav Mecir plays passing shots while looking fast asleep against Marat Safin, who will mournfully say, “I was trying to give up, but I couldn’t." On Centre Court, Jean Borotra will perform an old trick: when an opponent smashes he will bound the other way and into the lap of a beautiful woman in the crowd.

There will be a smoker (Lew Hoad) in attendance and a fellow whose strong wrists came from milking cows (Roy Emerson). Steffi Graf will run like a skittering deer and hammer forehands as routinely as carpenters do nails into coffins. Marriage proposals will rain down but Graf will shout back with Teutonic matter-of-factness, as she once did to an admirer at Wimbledon, “How much money do you have?"

Helen Wills, an American who offers no emotion at all, will be there too, for how do you not invite a woman who won 180 consecutive matches between 1927-33? If this is impressive, consider she did not lose a set either and won eight Wimbledon titles. Gabriela Sabatini won none but will play for reasons that don’t require further explanation.

Serena Williams will stop Graf in the semis after revealing the German’s backhand slice as a beautiful weakness. Martina Navratilova, from the same athletic factory as Margaret Court but a superior model, will out-power the Australian to reach the final. There are no smiles in this match between a proud, courageous gay woman and a Pentecostal pastor who reportedly accused Navratilova and her lesbian ilk of ruining the sport.

Two days later, Navratilova, using spring-loaded volleys, will win it all after Williams loses both temper and serving rhythm in the final. The Czech-American is quick, creative, forceful and so aggressively captivating that in a certain sort of tennis way she seems to represent what Yukio Mishima once wrote: “True beauty is something that attacks, overpowers, robs, and finally destroys."

The Swiss wins and then collides with Tilden in the semis. Federer is friends with Vogue editor Anna Wintour; Tilden was pals with Charlie Chaplin. A haughty show is inevitable. In a tournament where 54,000 Slazenger balls are used, Tilden—so wrote his biographer Frank Deford—pulls an old trick of holding five balls, serving four aces, and tossing away the fifth. Federer responds with a silken drop volley where the ball hits the earth and crumples like a man having a heart attack.

Federer wins and meets Borg in the final, after the Swede wins 8-6 in the fifth when a tiring Sampras misses a forehand volley at match point. Federer can’t be overestimated, but Borg is underestimated. In a time of inadequate sporting memory, Nadal, even before he recently won his 12th Grand Slam title, was seen as easily superior to Borg on 11. But the Swede won five Wimbledons on slick grass (Nadal has two on slower grass); he won the French-Wimbledon in three consecutive years, Nadal only twice; he has 11 Slams with only one visit to Australia while Nadal has played eight Opens in Melbourne. And if Rafa is surging at 27, Borg had done all this and retired at 25. Bloody hell, as the Brits might say.

Their final will advertise all of tennis’ beauty. No one knows in this sport, unlike football, when a match will end. No coaching, like boxing or hockey, is offered to the wounded man who must fight on both alone and lonely. No escape, like badminton, is found from the wind. Borg is fast, Federer is agile; the Swede is precise, the Swiss invents; the bearded one is unmoved, the clean-shaven fellow has the capacity to move. Borg defends, Federer can do that and also attack and this distinction is their tiny difference. The Swiss is the man going forward in every way.

Almost every year Borg has fallen in triumph, now Federer brings him to his knees 7-6 in the fourth. Already, in the clubhouse a man is stencilling his name on to the champion’s board. Then he is handed a trophy which stands 18 inches high and is inscribed with the words “The All England Lawn Tennis Club Single Handed Championship of the World". Rufus shrieks approval from the rafters. And the Swiss decides this is neither time nor place for another new Nike jacket.

Rohit Brijnath is a senior correspondent with The Strait Times, Singapore.