When Nisha Grayson was in second grade, her school class in California, US, put up a performance. “Don’t come!" Nisha told her mom on the day of the event. Stephanie Grayson went anyway. When she walked into the classroom and a child shouted “Whose mommy are you?" Nisha just hunched up, blushed and kept silent. 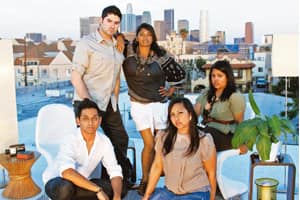 Friends in need: (from left, back row) Victor Lara, Nisha, Reena Ray, (from left, front row) Hitesh Khalashi and Sharmila Ray will travel to India and make a documentary about Nisha’s search for her birth mother. The four friends have given up their jobs, moved out of their homes and pooled resources to make this trip possible. Photograph: Adrienne Garcia

“She didn’t want anyone to know I was her mom," Stephanie says.

“I’m tired of explaining to everyone why you’re white and I’m black," the seven-year-old told her mom after the performance.

Nisha, now a petite 26-year-old with a quick smile, was adopted from Goa by an all-white family at the age of six months and raised in “the white part of America", as her father Randy puts it. The couple never taught Nisha anything about her birth country or culture, though they did retain her name and abided by one request the birth mother had made: never to cut Nisha’s hair. She didn’t cut it until she went to college. Stephanie says she figured “everyone would love each other" and that would be enough for Nisha to adjust to her adopted life in the US.

It wasn’t, though. After spending a few weeks with Nisha and her friends in southern California, it’s evident that she’s surrounded by love, and always has been. She herself is a caring, kind woman, working with adults with disabilities at United Cerebral Palsy in San Diego. But there is a sorrow about her, an insecurity and vulnerability that lurks just beneath her dark chocolate brown skin. Fast forward: (top) Nisha with Stephanie, her adoptive mother; (below) Nisha works with adults with disabilities at United Cerebral Palsy in San Diego.

When she started searching for her own identity, as all young adults do, she struggled more than most. In her adoptive family she saw no answers, no history, not even a common physical appearance. Was she Indian or American? What tied her family together? What did it mean that she looked so different from her mother and sister and father? The questions left Nisha full of doubts about who she is and where she fits into the world around her. And, in her search to find herself, she pushed away the family that has so much to do with who she is.

Last year, she decided to look for some answers. At the end of this month, with four friends in tow, she will travel to India for the first time since she left it and search for her birth mother. It is a long shot. The Society for Child Development orphanage in the town of Caranzalem, Goa, no longer exists. She knows no one there who can help her. All she has is her mother’s name, Amruta, and a desperate hope—a hope of finding her birth family; a hope of finding the sense of belonging she’s never felt; and maybe even a hope of coming home again, back to her adoptive family in the US, and feeling like she belongs to them after all.

Each year, according to the US department of state website, around 400 children from India are adopted into families in the US. Eighty per cent of them wind up with families of Indian origin. The rest are placed in interracial adoptions. But before Hollywood actor Angelina Jolie and pop star Madonna populated their homes with children from around the world, vowing to raise them steeped in the cultures of their birth countries, the reigning belief among those who adopted was to simply love the child and forget where he or she came from. “It used to be, regardless of their original culture or their skin colour, this child is truly yours," says Kate Emery, the senior India programme coordinator for adoption agency MAPS Worldwide. But now, Nisha’s generation, adopted in the 1980s and 1990s, feels this was a mistake. “They need to know their culture," says Emery.

Family ties: Nisha with her siblings Robert (from her father’s second marriage) and Randa.

It’s a thought that never occurred to Nisha’s parents. “I didn’t know any Indian people," her father says. “And I guess I probably wouldn’t have known how to approach them even if I did. Would I say, ‘You know, my daughter’s Indian. Would you mind if she hangs out with you?’"

Though she didn’t realize it as a child, it bothered Nisha when she grew up and realized she had never been exposed to her own culture. She resented her parents for never trying to teach her about where she came from. The resentment bore down on her and when it was time to pick a college four years ago, she moved miles away from her family in Sacramento to San Diego. When she finally told her parents how she felt two years ago, they were shocked, unaware of how much pain the adoption had caused her.

Her parents never thought her looking different mattered. To them she was simply a part of the family they had waited years to get. For, a few years after Stephanie gave birth to her first daughter, Randa, she found out she wouldn’t be able to have any more children. Three years of adoption procedures later, they received a photograph of a month-old baby born in an orphanage in Goa. “It became real to us at that point that there was a little girl halfway across the world that was going to be ours," Randy says. Nisha arrived six months later in Los Angeles, a small, healthy baby who lit up when she saw her new sister Randa.

They had a happy childhood, Randa says, but Nisha was always aware she was different. Though the family didn’t think it was a strange combination, everyone else seemed to be surprised. Teachers would be confused when the white couple came in for parent-teacher night. Children would tease her on the soccer field. Strangers would ask why she looked nothing like her family. “Nisha wanted a bond with someone that was like her," Randa says. “Me and mom look identical. How hard was that for Nisha to see every day?"

When Nisha was 11, her family moved to a new neighbourhood in Sacramento. On her first day at gym, another student, Reena Ray, spotted her from across the room. “I remember seeing this girl," Ray says, “and she was the darkest, littlest thing in the room, but she was wearing this T-shirt with strawberries on it and matching socks. And then out of her mouth comes the biggest valley girl voice ever." Nisha, who still has that distinct Californian accent, says she was instantly attracted to Ray—another small, dark-skinned girl. And, unlike the other Indians Nisha had met, who grew up in large Indian families and obviously belonged to a culture different from Nisha’s, Ray was as American as she was. “I really am so American," says Ray, whose mother is Filipino and father Bengali. “Being half and half, I didn’t really want to pick one (culture) and not the other."

Ray’s elder sister, Sharmila, became close to Nisha as well. The girls formed a multicultural group of friends. And suddenly, Nisha’s family—her mother, father and sister—felt left out and different. Randa says Nisha created her own family. She kept waiting for Nisha to come back to their family, but Nisha never did.

Nisha loves her family, but admits she feels closer to her friends. She feels she can never be really open about her feelings to her family and that sometimes it’s more simple not to say anything to them at all.

For Nisha, it is just easier to talk about herself to people who understand what it is like to have a white person question her American citizenship, or to people who can make a joke when she feels dumb that an Indian family walks up to her and speaks in Hindi and she can’t answer.

But Nisha still feels alone; missing a mother she could only imagine all her life, from bits she picked up from her parents’ stories. One particular thing Nisha clings to, a reason she thinks her birth mother would want to be found, is a letter that arrived at the Grayson home on Nisha’s first birthday. “My darling Nisha baby, I will always love you," it began. 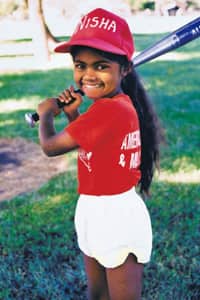 “From time to time over the years, I would find the card around the house, and I would know Nisha had been looking at it," says Stephanie, who speaks with the wrenching love of a mother who can no longer protect her child from pain. She also speaks with the pain of knowing that no matter how good the intention, she caused some of that hurt. She tells me that Nisha’s birth mother lived at the orphanage before the birth and stayed with Nisha for some time after she was born.

When I ask Nisha about this story over coffee a few days later, she starts crying. “I never knew that!" she says. “Just the thought that she stayed, that she did really care for me, that it was hard for her, means a lot. I know she wouldn’t have done it if she didn’t have to, which is why I don’t hate her for it. But to think that she stayed…"

Beyond the letter, Nisha has little else to help her track down her mother. Emery, the adoption specialist, says that records were scant in India till recently. Also, Emery says, it could be dangerous for Amruta if Nisha’s birth was a secret. “It’s really a tough situation," Emery says. “It obviously would be hugely helpful for Nisha to be in touch with her birth mom, but it could really put the birth mom at risk, because most likely it was a birth that was hidden."

On top of the possibility of not finding her mother, she may not find any greater sense of identity in India than she has in the US. She’s excited to go—to see “360 degrees of Indian people all around me", as she puts it, but she’s American through and through. She knows little about Indian culture; can’t speak a word of Hindi. It could make her feel all the more identity-less.

“If I’m not going to fit in anywhere, that’s fine," she says, not altogether convincingly. Still, she says, even if she fails to find her mom and never finds a sense of identity and belonging in India, the fact that she undertook the search might bring her closure.

Probably, she says, she’ll move back to Sacramento to be closer to her adoptive family; maybe she can bring her adoptive mother and sister to India if she finds her birth mother. “I just want to hug her and hold her and look at her. I just want to see who I came from. And to thank her."

She has got her mother’s name tattooed across her hip. “I want it to be a homage," she says. And, perhaps, in a way, it’s a recognition that even if she never does find her birth mother, she can still answer the question of who she is herself.

For details on Nisha Grayson’s trip to India, log on to Myindia09.com