Thanks for Visiting Mint
You seem to have an Ad Blocker on. Please turn it off in order to continue, or whitelist Mint
HOW TO TURN OFF AD BLOCKER
OR
REFRESH IF YOU ALREADY TURNED OFF THE AD BLOCKER
Home >Mint-lounge >Plastic city

It could be an isolated prison cell, or a dormitory straight out of a Charles Dickens novel. Twelve beds, placed in two rows, each filled with dusty, torn soles of old shoes. Twelve naked, warm bulbs lit above each of the 12 beds. Vivan Sundaram’s installation work, 12 Bed Ward, on display at Mumbai’s Chemould Prescott gallery is a stark, but moving metaphor of urban decay. “I came to know from a friend that only the soles of a shoe can be recycled. Finally, it’s the sole that has value. I found that fact sad, yet very telling about what’s important and what’s worthless in urban life," Sundaram says.

Eerily reminiscent of the heaps of tattered shoes collected from the concentration camps of Nazi Germany, permanently on view at the United States Holocaust Memorial Museum, Washington, DC, Sundaram’s work is part of Trash, a solo of photographs and installations that’s taking place simultaneously at Chemould Prescott and Project 88 .

One of the other works at Chemould is a video installation, Tracking. The viewer makes his way between two rows of beds as a drone of shrill, industrial sounds plays in the background. Tracking is a huge video screen placed in a dark room adjacent to where 12 Bed Ward is displayed—it’s a jumbled narrative of the artist’s dismantled sculptures, used objects and artefacts. The works at Project 88 consist of digitally manipulated images of urban waste and another video installation, Turning. 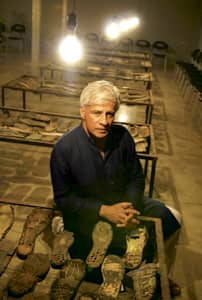 Sundaram, arguably India’s first installation artist (he started working in the medium in the mid-1990s, before artists such as Sudarshan Shetty became famous champions of the genre), has been known to be a master of details. For these works, made between 2003 and 2007, Sundaram collaborated with rag pickers in Delhi to collect waste objects—dirty toothbrushes, used coke cans, plastic toys. Finally, they were juxtaposed carefully, keeping in mind colour schemes and shapes, and either videotaped or photographed. “Most of the compositions are deliberate, although when you’re working with this kind of a scale, there ought to be some element of chaos. I wanted the canvasses to be thickly populated, even jammed, to convey the overwhelming presence of trash in our lives," Sundaram says. The idea behind the show, he says, is the modern world’s fascination with recycled objects.

In 1997, Sundaram began exploring the possibility of making art through waste objects after he was introduced to Chintan, a Delhi-based non-governmental organization that fights for the rights of the city’s waste pickers. Back then, he was wary of the use of terms such as “installation art" to describe his works. In 1999, Mumbai’s Sakshi Gallery hosted Shelter, a solo show of his installations. “Please don’t call them installation, they are neo-sculpture," he had told me then. Sundaram is much more comfortable with the label now. His engagement with political ideas, pronounced since the late 1960s when he graduated from the faculty of fine arts, Maharaja Sayajirao University of Baroda, is now expressed in more subtle ways. Some of Sundaram’s earliest works from the early 1970s, The Heights of Macchu Picchu, The Discreet Chain of the Bourgeoisie and The Indian Emergency, voiced urgent political concerns of that time. In 1991, the Gulf War inspired a series of works in engine oil and charcoal on paper. “Now, for me, the political is a subtext. Here I’ve tried to explore the dynamics of class barriers in our society and, of course, the environmental degradation that’s such a scary but ignored part of our world."

Sundaram’s love for photography as an art form is obvious not only from the images in this exhibit, but from his last major show, Re-Take of Amrita, a photographic souvenir of his family’s past. He used digital technology to layer and enhance vintage photographs of his aunt, the legendary artist Amrita Sher-Gil, for which he received rave reviews from critics the world over. After this show, Sundaram returns to drawing, a medium he has largely stayed away from. “I feel the need to go back to drawings," he says. “The ideas are slowly taking shape."