Par for the LET course

Par for the LET course

It was a mere 6ft that separated golfer Sharmila Nicollet and the card that would make her eligible for the prestigious Ladies European Tour (LET) for 2012. “Mentally strong", as she describes herself, Bangalorean Nicollet professes to have been in complete command of her game when she planted her feet firmly around the ball, took a deep breath, and stroked it gently towards the hole. A few seconds later, she had become, at 20, the youngest Indian ever to qualify for the LET. The gruelling 165-hole, nine-round tournament held at South Course, Spain—from 8-11 January (pre-qualifier) and 15-19 January (qualifier)—and plagued by occasional spells of bad weather, culminated in joy for India’s No. 1 female golfer.

In a phone interview, Nicollet provides an account of her most glorious moment yet. Edited excerpts:

Tell us about the qualifying tournament that helped you win your ticket to the LET. 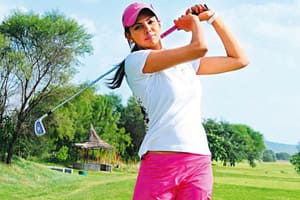 On the first day, I scored 5 under par to lead the field. But by the third day, the weather worsened. Windy weather has always been my weakness because I have always been pampered by the mild weather in Bangalore. I soon dropped to 11th. Before I knew it, I was 23rd in the field. But since the top 50 players would have qualified for the last day’s play, I knew I was comfortably in the running.

After the full day’s play, though, I was competing with five other players in a play-off for the last two cards for the LET. On the first play-off hole, I hooked the ball left into the trees. Now I am mentally strong. At that moment, I told myself that I’m the only Indian to have come this far. Soon, I returned to my zone. I made a par on that hole. As girls started to drop out, I held my nerve. Three girls went into the last hole. I held an advantage on that hole because it was long and my strength lies in my driving. I hit my best drive of the week and was soon left with 65ft to the cup and two shots to par. My first attempt left me 6ft off the cup. All I needed to do was sink that putt.

Has your game shown any marked improvement over the last year?

2011 was tough for me. I began the year by parting ways in January with my coach, Gaurav Diwan, who is much more than a coach for me, and who got me where I am today. The next four-five months were difficult because I was all on my own. I soon realized that I needed help. I reverted to my old coach— Tarun Sardesai. I have been working on improving my game ever since, and have made considerable changes in my approach to putting.

So which LET event will you begin your European stint at?

It’s not decided yet. I want to take two-three weeks off, work on my game. I plan to play 23 tournaments on the calendar. My first tournament would be either China or Morocco (both in March).

I need to improve my game. In India, I can afford to shoot a 7 over par and still be in the running for the title. But in Europe, even a 5 under can leave me far behind the leaders. What sets the best players in Europe apart from me is their putting. I really need to work on my putting, regulate my under par rounds. I want to be like a Caroline Hedwall who burst on to the European Tour with a bang. First and foremost, I want to win an LET event to start it all off.

Are you making any special preparations for the LET?

In a way. I’m thinking of going to London or Paris to practise and get used to the European weather because it has always been my major weakness. But I also want to continue playing a few tournaments in India. I can’t neglect my roots. I hope to inspire young girls to take up this sport. I want to make them realize that there are other careers beside pursuing higher studies. It is comparatively tougher to break into, but in the end it’s well worth it.

Olympics 2016—I want to win a medal there. In two-three years, I want to move to the LPGA tour, which is my ultimate goal. I have been No. 1 in India for a long time. It’s time I accomplished more. But I guess I’ll stick to playing on a single tour instead of shuttling between different tours.