Winston Churchill claimed that “India is a geographical term. It is no more a united nation than the equator." While the second part of his statement has been proved wrong, it is unlikely he had any idea quite what the first part meant. While India is indeed a geographical term, it has a dual geography, a physical one, but also a sacred geography which dates back millennia.

It is surprising we have had to wait so long for a volume to examine this fascinating spiritual geography. The concept of the sacredness of the land of India is one which makes many people uncomfortable, in part due to its politicization as Bharat Mata or “akhand Bharat", that is, an undivided India which includes Pakistan and Bangladesh. There has also been unresolved political conflict over sacred sites; from Ayodhya, where a mosque is said to have been built on the birthplace of the Hindu god Ram, to the Ram Setu, a rock formation to some and the bridge built to rescue Sita from Lanka, to others.

India’s sacredness is sometimes regarded as being a way of labelling the country as backward for those who believe, as Max Weber says, that the modern world is disenchanted. But this everyday sacredness for millions of Indians is more interesting as a way of querying the whole idea of modernity itself.

Diana L. Eck, a distinguished scholar whose book, Banaras: City of Light, is rightly regarded as a classic, is an ideal guide. Wearing her immense learning lightly, she leads us gently but firmly through the contested nature of India’s sacredness. She focuses mostly, though not exclusively, on Hindu texts, taking the reader around the whole country, though rarely stepping beyond its 1947 borders. After the introduction and “What is India?" sections, themselves comprising a hundred pages, the book is organized around an overview of Hindu cosmography, the sacred rivers, then the landscapes of five major deities, Shiva, Shakti, Vishnu, Krishna and Ram. Eck travels from place to place, pausing to tell us stories before moving smoothly on to the next. 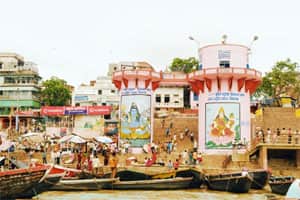 Heaven and Earth are not clearly divided, for the borders between the world of the gods and the human world are thin in places. These include tirthas (fords, crossing places) and inaccessible places in the world, such as the mountains, the Himalaya or Devalaya, where gods dwell. Places loved by the gods and where they have been manifest have further sacred associations, while the seven places where the goddess’ body fell on earth are the Shaktipithas.

The sacred locations are linked by stories of pilgrimage routes, from chardham yatras (pilgrimage to the four main holy places), which map the sacred space of India, to digvijayas (conquests of the regions), famously in canto IV of Kalidasa’s beautifully evocative Raghuvamsa, where Raghu goes to set victory pillars in the mouth of the Ganga, before travelling to subdue the regions.

These circuits of movement carry implications not so much for the nation-state of India, as for understanding ways of thinking about networks of interrelatedness on spatial and spiritual levels. They also ask us to reconsider the ecological implications, from exploitation to pollution, of these sacred places: Ram Teri Ganga Maili.

While it could not be comprehensive, some of my favourite places are omitted, probably because the book is already lengthy and they are marginal or recent—indeed, some of them are 20th century. These include the Shirdi Sai Baba temple, a syncretic centre whose links to the film industry are demonstrated by the helicopter link to Mumbai which allows film reels to be brought for speedy blessings, and the nearby Shani temple in Shinganapur, the town with no locks and no doors, visited by businessmen who want to avert Shani’s malign influence.

Gujarat’s extraordinary mountain shrines of Palitana/Shatrunjaya are not mentioned (although Girnar is), nor is Gujarat’s Bahuchara Mata temple in Mehsana, a centre for hijras (eunuchs), or its Jalaram Bapa shrine in Virpur. Eck rightly points out that new sacred geographies are evolving overseas, as Hindu temples are being built, though she does not discuss the Akshardhams that the Swaminarayan sect is putting up in India, following those built earlier in Africa, Europe and the US, as they establish themselves as the dominant overseas Hindus.

This book is a genuine classic; a summation of a scholarly life, where an academic engagement with religion and research meets pleasure in travelling in India. Elegantly and lucidly written, India: A Sacred Geography is accessible to all readers, from researchers to students to pilgrims. I devoured all 500 pages in one sitting, and am inspired to visit and revisit these sacred places. Chalo Man Ganga Jamuna Tir.

Rachel Dwyer is professor of Indian cultures and cinema at SOAS, University of London. Her next project is on the Indian elephant.