Thanks for Visiting Mint
You seem to have an Ad Blocker on. Please turn it off in order to continue, or whitelist Mint
HOW TO TURN OFF AD BLOCKER
OR
REFRESH IF YOU ALREADY TURNED OFF THE AD BLOCKER
Home >Mint-lounge >5 mutual funds to watch

Reliance Mutual has a history of letting its funds get bloated in terms of its assets under management, or AUM. And the firm’s culture places a premium on running a big fund. 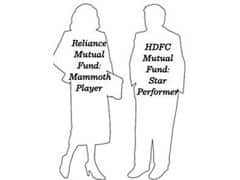 The asset management company (AMC) has many firsts to its credit among sector funds: banking, media and entertainment, and power. This year, it came out with a Natural Resource Fund. On the debt side, the fund house has good, low expense ratio funds such as Reliance Short Term and Reliance Liquid Treasury.

Though the fund house barely has a presence in the hybrid category, it does have a huge choice in the types of funds, with some good performers.

One of the industry’s sturdiest shops, its performance has been strong over time. Lately, however, it has gravitated towards the back of the pack.

HDFC Mutual’s temperate ways have served it well over the years. It has been a consistent performer, providing a cushion as racier options fell. But investors are disappointed with its performance in the second half of the bull run. Certainly the risk-adjusted returns were not impressive, but it is no cause for alarm. These funds lag the pack when the market’s raciest names lead the charge.

In Prashant Jain, investors have a fund manager who has proved his mettle over various market cycles. In 2003, HDFC Mutual Fund bought out Zurich Mutual Fund to become the second largest fund house in India, inheriting a great equity portfolio, an aspect missing earlier (prior to this, HDFC Mutual Fund was focused on debt offerings.)

The funds’ performances have an enviable track record. The company currently has nine funds with a four-five-star rating. But there seem to be no star fund managers other than Jain. Recently, the fund house has also been losing talent. It seems to have gone on an asset-building spree—surprising, since it always steered clear of the NFO mania. In 2007, it launched a number of funds, including two close-ended equity funds, a mid-cap offering and an infrastructure fund.

It’s like having two AMCs under one roof: a large, well-run fixed income one and an average equity one.

This fund house has been quite aggressive in its product launches. In the equity segment, it came out with three schemes this year. It offers a lot of variety to investors. Unfortunately, its performance in equity does not match up to its debt funds.

From its inception a decade ago, it created history in the fund management industry, reaching the No. 2 position in just five years. But ICICI Prudential is more dependent on institutional investors and debt assets. Out of its asset base of Rs49,371.12 crore, around 28% comes from cash funds and almost 20% from fixed maturity plans, or FMPs. The company is credited with running the largest ultra short-term fund and floating rate short-term fund.

ICICI Mutual Fund was promoted by ICICI and later, US-based investment bank JPMorgan acquired a stake. In 1997, the latter was replaced by Prudential Plc., a British insurance and pension major, with a name change to Prudential ICICI (a joint holding in 55:45 ratio). In 2007, the name again changed to ICICI Prudential to reflect a change in the shareholding pattern.

Only a few of UTI’s funds are great performers but this public sector fund house has advantages its rivals lack. It has a huge base of retail equity investors and a vast distribution network largely inherited from the Unit Trust of India.

In the last few years, UTI slipped from being the largest AMC to being No. 4. However, its asset growth has been robust, if slow. It still has the largest investor base and biggest equity assets besides being, by far, the country’s most profitable fund company. Its conservative approach and stable parentage make it attractive.

Its problem is dragging performance. Recently, it has made an effort to improve, merging several equity schemes and overhauling its approach to equity investment. However, falling stock markets have made it impossible to judge its success. UTI’s top performers are a few index funds, some hybrid funds and its infrastructure funds. Some income funds also stack up well.

UTI is co-owned by four public sector enterprises: Life Insurance Corp., State Bank of India, Punjab National Bank and Bank of Baroda. It was planning an IPO this year which would have made it India’s only listed fund company. However, the issue was deferred due to falling stock markets. Of its 14 funds boasting a five-star or four-star rating, just one is an equity offering. Not surprising since equity assets stand at just around 17%. None of the equity funds, barring Birla Sun Life Equity, is a star performer.

In December last year, the company lost two good fund managers, equity and debt. This year, the CEO moved out; the new one has ambitious plans.

Birla Sun Life AMC is an equal stake-joint venture between Aditya Vikram Birla Group and Sun Life of Canada. Besides the mutual fund business, they are partners in financial distribution and stockbroking businesses and in life insurance.

In 2004, the AMC bought Alliance Capital AMC, becoming India’s fifth largest fund house. Alliance Mutual Fund had 14 schemes which got added to Birla Sun Life’s 38. It also benefited from some equity funds such as Alliance Basic Industries and Alliance Equity, which were excellent performers. The fund, to be benchmarked against the S&P CNX Nifty Index, will invest in stocks of leading companies in their respective industries. The fund manager will look for parameters such as better pricing power, superior cost structure, significant and sustainable competitive advantages, among others, which reflect in high market share, high return on equity or high growth rate. The fund may also invest up to 20% in debt and money market instruments.

There are at least two other funds with a similar portfolio focus to Religare Aegon’s Business Leaders Fund—UTI Leadership and Sundaram BNP Paribas India Leadership.

Investors should not need to time the market. The investing approach should stay the same regardless of market conditions.

• Put any cash you need for three-five years in fixed income assets.

• Long-term funds should be allocated between fixed income and equity depending on your ability to take temporary losses.

• If that balance changes because one asset type has earned more than the other, sell one and buy the other to restore the balance.